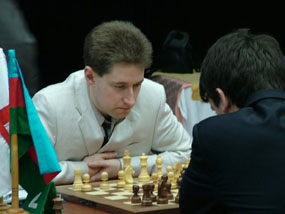 England’s Michael Adams defeated Teimor Radjabov in the 2004 World Chess Championship, being played in Tripoli, Libya, by the score of 2.5 to 1.5. Adams will face the winner of the Veselin Topalov – Rustam Kasimdzhanov match. That match is tied at 2-2, with a playoff to determine a winner. Adams is only the third westerner since Bobby Fischer in 1972, and fellow Brit Nigel Short in 1993, to play for the coveted title.

After yesterday’s surprising draw offer when Radjabov may have been slightly better, today he surprised Adams again with his choice of opening. 2..Qe7 in the king’s pawn is rarely played since the queen tends to get in the way of the development of black’s pieces. Additionally I could find no record in any of Radjabov’s games or even on ICC of him having played 2.Qe7 before.

Adams played cautiously taking some space but no risks so that by move 15 he had a tiny advantage and the clocks read 59m vs 53m. He then played Nf5 and two pieces came off the board for each side. After 19.Be7, the position was pretty much equal and the clocks had changed very little also.

Adams now thought for around 9 minutes and played 20.Ba5. This idea is found in positions normally arising from the Scandinavian or Caro-Kan defence. Radjabov played 20.Rd5 with the times now reading 46m vs 45m. Adams could have chosen to exchange off some heavy artillery with Rxd5 but instead swopped off the bishop and then moved his rook to d3, ready to double.

After an exchange of rooks, it was clear that Adams was not taking any risks by neutralising black’s initiatives. Radjabov tried to keep some tension in the position with 26.Rd5.

Both sides jockeyed for a large number of moves for the exchange of the last pair of rooks but Adams was never in any danger thanks to the strong knight on e4. Radjabov tried his best and shuttled his queen all over the board. Then as time control approached Radjabov tried to open up the queen side. The time at move 40 was Adams 24 – Radjabov 22. Again Adams aimed for easy equality with 41.Rd1 and after exchanging rooks there was very little left to play for.

Radjabov played on a few more moves but a draw was soon agreed on Radjabov’s proposal and Adams goes through to the final with a score of 2.5 – 1.5.