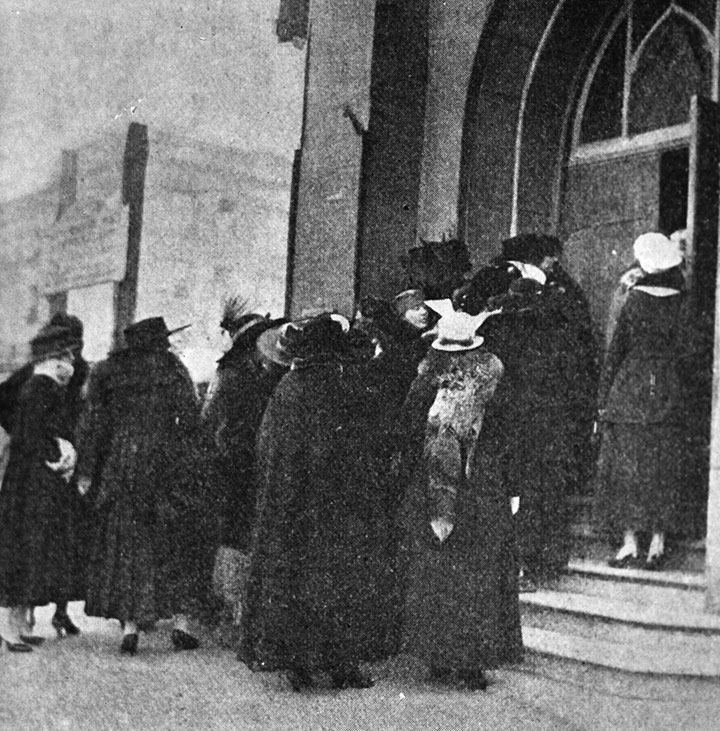 Women of the Underworld march through the Tenderloin to a church, January 25, 1917

On January 25, 1917, nearly 300 Tenderloin brothel workers engaged in the first mass sex worker march and protest in United States history. It was one of the most powerful struggles for women’s economic justice in San Francisco history, and sent shockwaves through the city.

Now on January 25, 2017 at 5:30 pm, the Tenderloin Museum and the Center for Sex & Culture are staging a 100th anniversary reenactment of this event. It is not to be missed.

As I discuss in my book, The Tenderloin: Sex, Crime and Resistance in the Heart of San Francisco, 1917 was a pivotal year in Tenderloin history. The city’s elite waged a campaign to close down the neighborhood, following the same process that had quickly shut down the Barbary Coast in 1913. But the Tenderloin was different. Its residents, café and bar owners, and bordello operators fought back.

Reggie Gamble’s speech, which was covered by every one of the city’s major newspapers, demanded economic justice and a halt to the looming evictions that threatened to displace hundreds of sex workers that lived and worked in San Francisco’s Uptown Tenderloin. The 1917 march, the first of its kind in the United States, sits alongside the protests at San Francisco’s Compton Cafeteria and the New York’s Stonewall Inn as important historical events reclaimed by communities, and an important milestone in the struggle for sex worker’s rights.

100 Years of the Sex Worker’s Rights Movement will begin on Wednesday, January 25th at 5:30pm at the Tenderloin Museum. A $10 suggested donation will be taken at the door (no one turned away for lack of funds). Refreshments will be available. The procession to the original protest site, just two blocks from the Tenderloin Museum, will leave at 8:15pm. If you plan on attending the march, warm clothes, candles, and signs are encouraged.