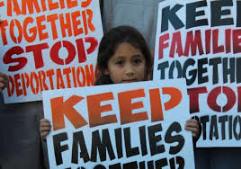 Advocates applaud reported movement on enforcement practices and priorities from Homeland Security head, but caution any memo outlining changes needs to be strictly enforced, unlike others that have failed to change practices by agents in the field.

DREAMers have been protesting and doing hunger strikes outside the White House in hopes of getting President Obama to take administrative action to slow deportations.

Immigration activists say they’re cautiously optimistic about reported changes to Obama Administration policy on deportations, but have serious enforcement questions about a key memo officials are reportedly preparing to address the issue.

The reported changes would be the initial results of the Department of Homeland Security’s review of deportation policy. Although that review, announced after massive pressure from activists on the issue who continue to protest outside the White House even now, has produced no official conclusions yet, the Los Angeles Times reported on a slate of potential moves DHS is considering this week.

David Leopold, former president of the American Immigration Lawyers Association, said the proposed changes would effectively slow deportations. Adding bond hearings would mean undocumented immigrants could fight their cases outside of detention, and those detained have their cases expedited in court, he said.
The reaction to that and other measures has been a mix of optimism and the desire for more action.

Cesar Vargas and Erika Andiola, DREAMers who have been protesting outside the White House because of the administration’s record deportations, said the changes in priorities that have been floated would have a real impact in the lives of immigrants, but said they will continue to push for more from the president.

“It would totally be a big deal for folks with reentry charges,” Andiola said. “We however think that there is still a way for affirmative relief to also be part of any announcement from the President.”
Vargas said bond hearings are a way of protecting people, but more can be done so “U.S. citizen children don’t have to see their mother or father being taken into detention.”

Lorella Praeli, director of advocacy and policy at United We Dream, said perspective is needed on the issue of bond hearings for undocumented people. “Is it important for people to have bond? Absolutely. Is it outrageous that they don’t already have it? Yes.”

But immigration activists do agree on one thing: If field agents do not enforce the changes in the memo DHS officials are reportedly preparing, the memo will be worthless.

“The question is what will the memo entail and what is the commitment to such a memo?” Praeli said.
Officials with knowledge of the DHS process cautioned that it was too early in the process to rule in, or out, any one provision in an eventual memo. While multiple activists told BuzzFeed they believed a memo would come in the next week, that timeline was disputed by some close to the process.

Marielena Hincapié, the executive director of the National Immigration Law Center, said that 70% of immigrants are deported without going in front of an immigration judge, so she thinks the bond hearings are an important step, but is concerned with how and if the eventual memo would be enforced.

“They need a strategy for how DHS personnel will be held responsible,” she told Buzzfeed. “[United States Secretary of Homeland Security] Jeh Johnson has a major management problem, so how are they going to be held accountable? There should be quotas, not for how many are detained, but how many are given discretion.”

Both Hincapié and Leopold said the coming memo can succeed where the Morton memo, a 2011 document concerning prosecutorial discretion, and others failed by not repeating the same mistakes. They described the Morton memo as alternatingly “vague” and “contradictory,” but Leopold noted that he hasn’t heard complaints on how DACA was implemented because it was clear to agents.

A DHS official with knowledge of the process called it robust and said it involves many different interested parties.

“Secretary Johnson is very engaged with the operators and the agencies that are involved in the implementation of our policies writ large,” the official said. “The secretary has met with frontline officers, including the leadership of ICE, border patrol, and U.S. Citizen Immigration Services, who have been part of every conversation. Additionally, he’s getting input from both sides of the aisle, advocacy groups and stakeholders, businesses and the faith community.”

In private meetings with advocates, Johnson himself has said that it is important for him to “socialize” any eventual changes in enforcement practices with agents in the field.

The deliberate and comprehensive way he is going about the process, signifies to some that the eventual memo will be enforced. His role now has been compared to his last great hurdle: the successful repeal of
“Don’t Ask, Don’t Tell,” of which he was the point man.

For his part, Obama appears very aware of the pressure he faces, both from people that have previously been his allies and from Republicans, who say any administrative action would prove their allegations that the president can not be trusted to enforce the law.

On Thursday, Obama was asked about the hunger strikers and protesters outside the White House during a press conference. Obama said he knows Republicans are dealing with tough politics on immigration reform among their base, adding, “but what I also know is that there are families all across the country who are experiencing great hardship and pain because this is not being resolved.”

“We have already tried to take as many administrative steps as we could, we’re going to review it one more time to see if there’s more that we can do to make it more consistent with common sense and more consistent with, I think, the attitudes of the American people, which is we shouldn’t be in the business of tearing families apart that are otherwise law-abiding,” he said.

Douglas Rivlin, from the office of Rep. Luis Gutierrez, who has been active in calling on the administration to slow deportations, said the congressman wouldn’t want to comment yet on details that may be included in the eventual memo, but blamed House Republicans for stalling immigration reform and said it makes sense for Johnson and the president to pursue possible administrative action.

“The White House obviously has to set priorities for deportations given our unrealistic policies, as every President has had to, and the Obama Administration is exploring a whole range of ideas within the constraints of current law,” he wrote in a statement. “Given that Republicans may fail to take action on immigration this year, the President and the Secretary of Homeland Security have to examine their options.”
According to a Wall Street Journal report, House Speaker John Boehner told donors last month that Republicans will move forward with immigration bills in the summer. Activists, livid with the president, have even less trust in the House GOP because of stalled reform, but say they welcome actual movement on legislation.

“We say bring it, to Republicans,” Praeli said. “If they’re serious about it we’ve been waiting. But we’re also not going to take just any bill. If they’re serious let’s begin to have the conversation, but that’s hard to do without actual language.”

This piece first appeared in BuzzFeed