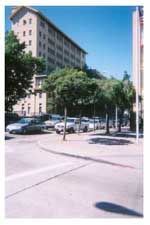 The fate of both a 9-story building that could be used to house homeless people and the proposed Mills Mall at Piers 27-31 will face important hearings Monday, ramping up activity among activists involved with both issues. The Citizen’s Advisory Committee (CAC) for the Surplus Property Ordinance will be meeting at 4 p.m. to discuss 150 Otis, an 18,769 square foot building currently used by the city for storage. The CAC will likely decide whether to let the city keep using the property for storage or convert it into permanent housing for homeless people. The Government Audits and Oversight Committee will also hold a hearing on the Mills Mall, a mega-mall the Mills Corporation continues to try and push through under the guise of a “recreation center.”

The battle over 150 Otis has pitted the Mayor’s Office of Housing against homeless and affordable housing advocates. The site was included in the Surplus Property Ordinance – legislation designed to turn all the city’s excess property into housing for homeless people – as a location to be targeted for conversion into supportive housing.

Currently, the Department of Human Services (DHS) uses 150 Otis for storage, and has done so for years – hence its inclusion on the Surplus Property List. Yet as the time for its conversion to housing neared, DHS and the Mayor’s Office of Housing launched a campaign to reclaim the property. They argue that because DHS has plans to eventually turn one floor of the 9-story building into a shelter, it should remain with the city.

A variety of homeless and affordable housing advocates disagree. They argue that the property has already been designated to provide affordable housing to homeless people, and should remain so. Not only would the building be put to a more complete use if converted to housing, they say it would also do a better job of solving homelessness by providing homeless people permanent housing rather than more shelters.

The push by the Mayor’s Office comes at an odd time, as it races to reach its goal of providing 3,000 units of housing for homeless people as part of it’s 10-year plan to solve homelessness in San Francisco.

A group of activists will be attending the hearing to push the city to give up its claims on 150 Otis. It will be held from 4 to 6 p.m. in Room 408 of City Hall.

Also up for consideration Monday will be the proposed Mills Mall at the Government Audits and Oversights Committee. Prop. H, passed in 1990, created a voter-mandated requirement that any waterfront development be for recreation or maritime purposes. Yet the Mills Corporation has proposed to use its 19 waterfront acres at Piers 27-31 for restaurants, shops, and more than 150,000 square feet of office space.

In addition to outcry against waterfront property being used for a mall, environmental organizations including the Sierra Club have pointed out the numerous environmental problems the development would create. They include threatening Bay Area wildlife, blocking bicyclists and pedestrians, and exposing people to sewage.

Top all that off with serious questions as to where the project will obtain funding, and it’s easy to understand why the issue has become extremely contentious. So contentious, in fact, that it now appears that Mills Corp. recently tried to avoid having the public hearing on the subject.

Environmentalists, bicycle and pedestrian activists, residents who live close to the pier, and others opposed to the project will be turning out to the hearing the hopes of offsetting the Mills Corporation’s efforts.

The hearing will be at 1 p.m. at the Board of Supervisors chambers at City Hall.