Activists Blur the Tenderloin with the Mission 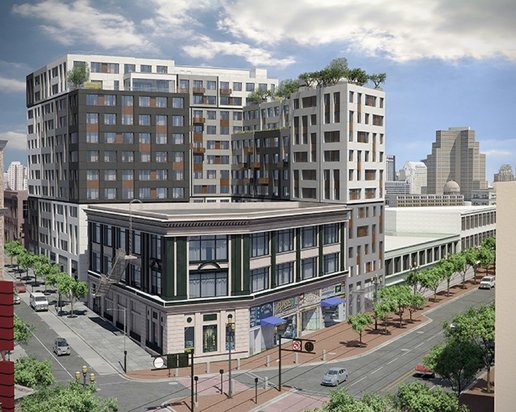 At the March 17 SF Planning Commission hearing on the Shorenstein Company’s 304-unit rental project in the Tenderloin (it passed 5-2), opponents argued it would cause displacement and gentrification.  Speakers saw only downsides, with Alexandra Goldman of TNDC arguing, “Existing Tenderloin residents must share in the benefits… We can’t support a project with so few affordable units.”

But the Tenderloin has never been, and can never be, the Mission. Today’s Tenderloin is reviving, but it is not the Mission of 1979, 1995 or whenever people identify as the start of its gentrification wave. The Tenderloin’s future path is distinct not only from the Mission,  but from Noe Valley, the Haight-Ashbury, the Castro and other former working-class neighborhoods that were completely or partially gentrified.

Prior to the onset of gentrification, the Mission and these other neighborhoods all had the following:

*significant ownership opportunities, either via single family homes or flats that could be converted to condos or tenancies in common;

*at least one and often multiple major retail shopping streets;

*a strong retail base;

The Tenderloin never had these qualities, and  never will.

The Tenderloin also has a far higher percentage of its housing stock—roughly 25%-33%—in nonprofit hands or otherwise protected from the speculative market.

No urban neighborhood in the United States has fewer opportunities for home ownership than San Francisco’s Tenderloin. Even nearly all of the market-rate projects proposed for the neighborhood will be rental. The only exceptions are a 35 unit project proposed at 469 Eddy, 950 Market (more a Market Street than  Tenderloin project), and an entitled project at 25 Mason whose plans remain unclear.

Gentrification is not possible with such low levels of homeownership. And unlike the Mission, virtually every buildable site in the Tenderloin has been taken so thousands of new condos cannot be built. Activists long ago passed strict land use protections to protect SRO hotels from being torn down and replaced with luxury condos.

As a result, the Tenderloin will be dominated by renters forever.

Nor will the Tenderloin ever have the retail shopping typical of gentrified areas. As I describe in my book,  The Tenderloin: Sex, Crime and Resistance in the Heart of San Francisco,  the Tenderloin’s legal economy (as opposed to its former gambling and brothels) has always been based on bars, restaurants, arts and entertainment. The Tenderloin’s current revival is driven by these historic pillars, not resurgent retail.  Even when the Tenderloin economy was booming from 1907 through the 1950’s it had no retail area that rivaled the Mission’s 24th Street and Miracle Mile, Noe Valley’s Church and 24th Street’s, Castro Street or Haight and Cole in the Haight-Ashbury.

The Tenderloin was built without sufficient retail spaces underneath apartments and SROs to create a successful shopping district. Unlike gentrified neighborhoods, it can never be a destination place for upscale shoppers. I cannot think of another gentrified mixed use neighborhood in urban America with as little potential for shopping as the Tenderloin.

Whether the Shorenstein project benefits Tenderloin residents is a crucial issue.

The Tenderloin faces both challenges.

Today’s Tenderloin still suffers from negative perceptions of a lack of public safety. Fears of going out at night, and of walking some blocks during the day, far exceed what residents of the Mission, Castro, Noe Valley and the Haight-Ashbury experienced in the 1970’s through today. While there has been major reduction in Tenderloin public drug dealing in the past year, there is at least one group of out of area drug dealers doing business on some block in the Tenderloin each day.

The Shorenstein project addresses this by positively transforming a long troubled block. While TNDC argued that “existing residents must share in the benefits,” they failed to recognize that enhanced street safety is a tremendous benefit. Hundreds of senior and other vulnerable residents in the three nonprofit buildings across from the project, as well as those living in nonprofits half a block away, will no longer have to walk to and from their building in fear.

Think how it feels to not be able to walk to your home without passing through a group of drug dealers. That’s what residents of the Tenderloin have faced for years along Golden Gate and Jones, and will continue to experience so long as a parking lot remains on the site.

It’s hard to think of a greater “resident benefit” for those already living in nonprofit owned subsidized housing than to walk outside your doors without fear of being mugged or caught in crossfire.  Increasing positive foot traffic is critical for crowding out wrongdoers. Yet TNDC and other nonprofits were so focused on an inapplicable “market rate housing displaces residents” frame that they ignored this.

While  TNDC argued that the project’s “affordable” units were too expensive for the community,  SOMCAN made the same arguments in opposing the 5M project —which TNDC supported. There was  a second Tenderloin project at 430 Eddy on the same Planning Commission calendar whose 12% inclusionary was not opposed by TNDC or anyone else; it passed unanimously.

Nonprofit opposition to a project with strong resident benefits happens when people mistakenly view the Tenderloin through the Mission’s lens. As noted above, the Mission was always far more vulnerable to gentrification than the Tenderloin.

And as I also detail in my book,  gentrification in the Tenderloin was also forestalled by nonprofits like TNDC that aggressively boosted the Tenderloin’s affordable housing supply from 1986 onward. Roughly 25%- 33% of the Tenderloin’s housing stock is off the speculative market, ensuring that low and working-class people will remain in the neighborhood.

Most project opponents had far bigger objections  than whether the inclusionary requirement should be 12% or 15%:  they saw the project as the latest step in the Tenderloin following the same path as the Mission—-i.e. transforming itself into a place that low-income residents will no longer be able to afford.

That’s not ever going to happen.

I’ve been hearing similar predictions since arriving in the Tenderloin in 1980. They were wrong then and they are wrong now.

The challenge for the Tenderloin is not Ellis evictions or tenant displacement, it’s creating a high quality living environment for its low-income residents both inside their buildings and out on the streets.

It’s been a rocky past fifty years, but the Tenderloin is now heading toward achieving that goal.

Randy Shaw is Editor of Beyond Chron. For the full story on the Tenderloin, read his book, The Tenderloin: Sex, Crime and Resistance in the Heart of San Francisco,