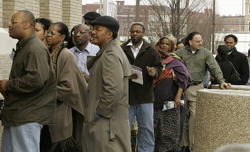 The most important insight that was confirmed for me in Denver this week is this: activists learned the right lessons from the November 2004 election and are applying them to achieve a different outcome this fall. Recall that in 2004, the lack of a progressive infrastructure in swing states like Ohio, New Mexico, Florida and Nevada had activists “parachuting” in to such states within two months—or commonly less than six weeks—before the election. This year will be different. Environmental, labor and social justice organizations built on their 2004 work, expanded upon it in 2006, and enter the fall election season with the structure in place to maximize the Democratic vote. Ultimately, progressive groups never stopped campaigning after Kerry’s 2004 defeat, making a long-term investment in electoral infrastructures that should pay dividends for Barack Obama and fellow Democrats.

I have spent a lot of time this week talking to activists in great detail about their plans for the fall election. As I noted regarding some environmental groups, although these plans are more ambitious than in 2004, activists have laid the groundwork for these campaigns far earlier.

The basic model is one that has organizers not simply doing door-to-door persuasion work, but rather to combine such work with the recruitment of volunteers. This is much different from simply getting a voter to say they will support a preferred candidate, and requires a far greater investment of time and money.

It also requires coordination, the lack of which was a continual complaint among groups working similar turf in 2004.

Turf battles are likely to be reduced in 2008 due to groups having already worked together for two to four years, and with leadership committed to avoiding such problems. Because groups like SEIU are building upon existing electoral outreach organizations, rather than creating them from scratch as occurred with America Coming Together in 2004, the political terrain upon which various groups will operate is already rather clear (or at least far more clear than in 2004.)

Republicans understood that electoral operations cannot be effectively assembled two months before the election, which is why the Party invested heavily in voter registration and precinct work in Florida starting in 2002. The national Democratic Party under Howard Dean began implementing this, and the Obama campaign presumably can build upon its primary and caucus electoral work over the past year.

The interesting question will be how the Obama campaign deals with moderate white suburban voters who will not be targeted by organized labor and who might not be receptive to environmental-based appeals. Independent progressive groups can maximize turnout of their targeted voters, but the official Democratic campaign must create an effective precinct operation to deal with these swing voters.

My time in Denver has convinced me that the best and brightest activists are working for progressive change this fall, and are doing so for longer periods than in 2004, when a huge number got involved in the campaign’s last weeks. Talent and leadership make a difference, particularly when multiple levels of coordination are needed to implement a system of voter outreach that will include volunteer recruitment, house meetings, and other components beyond simply getting a voter to say yes.

It’s inspiring to see. But it was also inspiring to see in 2004, and the Republicans outdid independent progressive groups on the ground. Whether the Republican ground game will be at its best for John McCain is unclear, but the GOP has to be concerned by the level of grassroots organization coming out of Denver.