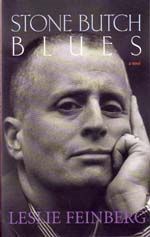 On Friday night, transgender labor activist Leslie Feinberg addressed over 150 people in a densely packed room in the Women’s Building, in an event sponsored by Workers’ World Party. Feinberg’s remarks, evocatively titled “Lavender and Red” after hir series of the same name in the Workers’ World newspaper, addressed the history of progressive and radical movements in the U.S., as well as the importance of alliance between movements for racial, economic and gender justice, among others.

“There are so many historical lessons that have been lost to us, largely because those movements faced red-baiting,” stated Feinberg. As “a masculine-girl child growing up in a working-class town”, Feinberg says ze learned early in hir youth that “to be baited for being a Communist meant you wanted to change things, and to be baited as queer meant you didn’t fit in.” Marxist or not, ze said, progressives are harmed by such red-baiting: “Anyone who asks for paint for the walls of their tenement instead of milk-of-magnesia gets asked, ‘What are you – a Communist?”

Feinberg is best known for hir 1993 novel, Stone Butch Blues, which chronicles the life of Jess, a genderqueer working-class lesbian growing up in Buffalo, New York. Hir more recent works include Transgender Warriors: Making History From Joan of Arc to Dennis Rodman, and Trans Liberation: Beyond Pink or Blue. A new novel, Drag King Dreams, is due to be published in the spring of next year, and Feinberg says ze’s also working on a book on health issues and transgender people, to be titled First Do No Harm.

As both a Marxist and a self-described gender outlaw, Feinberg stressed the importance of “reclaiming our history.” Ze joked that Americans see history represented as “the Flintstones! A bunch of white heterosexual-family cartoon people!” Meanwhile, Feinberg lamented, histories of gender-variant people, such as American Indian tribes that recognize more than two genders, are ignored or suppressed. “That’s not in the Flintstone School of Anthropology,” ze quipped.

Feinberg’s remarks were preceded by those of Nedjula Baguio, an advocate for the rights of transgender, gender-variant and intersex prisoners, and John Parker, a leader of the Million Workers March. Baguio, representing the Transgender in Prison (TIP) Committee of California Prison Focus, described the factors that land many transgender people, mostly transwomen of color, in prison.

If you’re transgender, “you may be unemployable,” Baguio reported. “More often than not, individuals don’t want to have anything to do with you as a future employee . No wonder so many trans individuals are forced into alternative economies – the biggest of those being sex work and drugs.” In prison, she said, transgender people are subject to “endless abuse and constant harassment”, such as “forced strip searches just to satisfy the curiosity of the guards”. Medical neglect represents a particular threat, said Bagiuo, citing the death of transwoman Jennifer Sutton as a result of undiagnosed renal failure.

“This is a basic human rights issue,” she concluded.

Parker decried the efforts of conservative politicians “to move black churches to denounce the evils of the lesbian and gay lifestyle”, and stressed the importance of unity across the left. “They try so hard to divide us, and that’s one thing we really can’t let them do . That’s why the Million Worker March is always standing in solidarity.”

An impromptu addition to the evening’s program was the performance of slam poet Becca Cooper, a self-identified “working-class dyke femme” from Pittsburgh, Pennsylvania. Her poem, which decried the labor policies of Wal-Mart, brought vocal cheers and applause from the audience.

The loudest cheers, however, were reserved for Feinberg hirself as ze approached the microphone. With characteristic humility, Feinberg stepped back, smiled and applauded the audience in response.