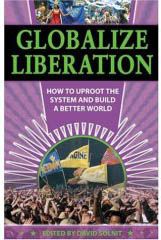 Four progressive authors and activists spoke last night at the Center for Political Education, sharing their thoughts on movement-building and the realization of social change. The event was titled “Globalize Liberation: How to Uproot the System and Build a Better World”, after the speakers’ recent anthology by the same name. Editor and anti-war activist David Solnit introduced the event by discussing “the new radicalism”, and how today’s grassroots movements should differ from yesteryear’s.

“The new radicalism looks different everywhere,” stated Solnit. He cited the Zapatista rebellion in Chiapas, Mexico, as a pivotal moment in his own understanding of the new radicalism. “The Zapatistas held that there are multiple valid frameworks to look at the world,” he said, contrasting this outlook to the “cookie-cutter model” of the past, epitomized by the Soviet Union.

Eco-activist Starhawk described a recent visit to Cindy Sheehan’s protest site, Camp Casey, in Crawford, Texas. “People you look at as George W. Bush’s natural base . are radicalized, are taking steps they’d never dreamed of,” she rhapsodized. “There are many ways in which Camp Casey has been a tipping point – it’s reached people we hadn’t been able to reach before, people who would never be comfortable in an anarchist street party.” She compared the site’s patriotic trappings and military discipline to an eco-village established in protest of the G8 Summit in Scotland, “an anarchist’s dream come true” run by consensus.

“We have to look at how much we are devoted to our particular style of organizing,” she concluded. “We have to see how to go there [to Sheehan’s supporters], instead of expecting them to be here.”

Chris Carlsson, a founder of bicyclers’ Critical Mass, complained of the limitations of identity politics. “We spend way too much time as radicals talking about who we are, and not enough time about what we do,” he lamented. “‘Live like I do or you’re my enemy'” is a losing strategy, he contended, “especially if you’re in a subculture.” Carlsson chided bicycle activists who harass drivers during Critical Mass rides: “Hey, it’s not a class war between people who ride bikes and people who ride cars!” Instead, he said, see all people as potential allies and “be on the offensive – with gracious, inviting behavior.”

The evening’s final speaker, Elizabeth Betita Martinez, posed the question, “What do we do about being revolutionary in an age of terrorism?” The longtime Chicana anti-racist activist outlined “the elements of an age of terrorism”, including “fear of violence and armed struggle”, “fear of the unknown”, “dependence on absolutism”, “no patience with gradations of belief” and “a profound sense of isolation”. Martinez contrasted these qualities with those of Zapatismo, which rejects dependence upon leaders, the use of state power, and the imposition of ideology. From Zapatismo, she said, we learn that our struggles need “roots and continuity”: a sense of our history and where we’re going from here.

“There’s not any cut-and-dry answers coming from this,” she admitted, “but [the Zapatistas] do have a vision of how society should be.”

The event concluded with an open discussion between panelists and attendees. Globalize Liberation is available at Bay Area independent bookstores, or can be ordered with a 30% discount online at www.globalizeliberation.org.