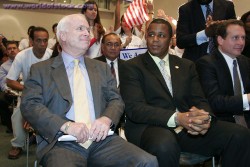 When the McCain campaign used Sarah Palin to denigrate community organizers, it targeted a constituency that knows how to win political fights. Consider McCain’s all-out offensive against ACORN. McCain claims the group is jeopardizing “the fabric of democracy,” and right-wing media outlets repeatedly accuse ACORN of “voter fraud.” But ACORN’s seasoned organizers have used media events, conference calls, and e-mail alerts to shift the debate, and put McCain on the defensive. For example, ACORN gave the media a video of McCain praising its advocacy for low-income people at one of the group’s 2006 events; this made McCain’s campaign season attacks appear hypocritical. In addition, ACORN re-focused the media on three key issues it had neglected: the Bush Administration’s firing of U.S. attorneys for refusing to prosecute bogus voter fraud claims, the Republican Party’s recent history of making false charges of voter fraud, and the GOP’s overall voter suppression strategy. ACORN has taken its share of hits along the way, but its counter-attacks on McCain have clearly reduced the candidate’s support.

ACORN (the Associated Community Organizations for Reform Now) has been around for 38 years, but it seems that many people did not know about its work until the McCain-Palin campaign targeted it for attacks. These attacks have focused on the group’s alleged involvement with voter fraud, a charge entirely based on the submission of some manifestly false voter registration forms by Project Vote, a group affiliated with ACORN.

At first, the notion that ACORN was involved with submitting voter registration forms for “Micky Mouse” and other obviously non-eligible voters put the group on the defensive. But ACORN quickly turned this around, informing media that most states require those collecting registration forms to turn them in even if they know they are invalid.

The media also noted the distinction between submitting a false registration form and an ineligible voter casting a ballot. Cases of the latter have been extremely rare, while the former is a crime with no political consequence.

Having repelled the essence of McCain’s charges, a less savvy group would have kept quiet and waited for the controversy to blow over. But ACORN includes organizers with decades of experience in grassroots campaigns, and they saw an opportunity to use McCain’s false attacks to inflict their own political damage.

First, ACORN reminded the media that the entire US Attorney scandal–ignored this campaign season–was based on Bush Administration anger that said officials refused to prosecute bogus voter fraud claims. This tactic put McCain’s attacks in a broader political context that weakens the credibility of his charges.

Second, ACORN produced a video showing McCain praising the group at a 2006 event. The October 21 Colbert Report had a field day with the video, whose net impact is to portray McCain as a hypocrite, if not a liar.

Third, ACORN got the media to focus on two other neglected stories: the Republican history of charging voter fraud, and of engaging in voter suppression.

Suddenly, the media was less concerned about Micky Mouse registering to vote than about the 1.3 million new registrants secured by Project Vote who the Republicans sought to disenfranchise. ACORN’s media strategy was clearly helped by the Supreme Court ruling in favor of Ohio’s new registrants, but the group’s work gained this court ruling more prominent national coverage.

Voter suppression was off the media radar screen until ACORN began responding to McCain’s attacks. ACORN’s efforts led the Obama campaign to formally raise the issue and to challenge a Justice Department leak that claimed the agency was “investigating” allegations of voter fraud at ACORN.

ACORN organizers succeeded in aligning the Obama campaign and soon much of the media with the cause of voter’s rights, and made McCain-Palin appear to be opposed to increased voter registration. It was now McCain-Palin, rather than ACORN, who the media was portraying as undermining the “fabric of democracy.”

Since McCain’s attacks on ACORN began, his favorability numbers have plunged and his campaign has fallen into disarray. ACORN was only one factor in this, but its organizers did help further the public sense that McCain was running a negative campaign focusing on trivial issues rather than on the economic crisis and other concerns at the top of voters minds.

At this point, McCain must wish the ACORN issue would simply go away. But as ACORN organizers know, once one’s constituency is attacked, it is not the assailant who decides when the conflict ends.

And ACORN now seems to be having too much fun turning the tables on McCain-Palin to stop.

Randy Shaw is the author of the newly released, Beyond the Fields: Cesar Chavez, the UFW and the Struggle for Justice in the 21st Century (University of California Press)