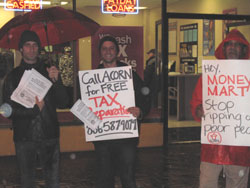 For over two years, ACORN (the Association of Community Organizations for Reform Now) has been waging a campaign to change the practices at individual tax preparers. The group has won reductions in the prices of Refund Anticipation Loans (RALs) and other refund products at the three largest tax preparation companies in the country – H&R Block, Jackson Hewitt, and Liberty Tax – and has won improvements in the disclosures and information that these companies provide to their customers about their refund options.

Now ACORN is setting its sights on Money Mart, which has 12 stores in San Francisco. Although Money Mart is mainly known for payday lending and check cashing, ACORN says that the company also prepares tax returns and pushes costly RALs and other over-priced refund products to its customers. The group wants Money Mart to stop their predatory refund practices and agree to the same changes as the other tax preparers have done.

Last Wednesday, ACORN held a protest at the Money Mart store on 7th and Market to call attention to this issue.

RALs are short-term loans secured by the recipient’s tax refund. Customers are charged extraordinarily high interest rates to get their own tax dollars back from the government just a week or so faster than they otherwise would. According to ACORN, these loans are marketed aggressively to those families who can least afford to lose the money, especially low-income working families who receive the Earned Income Tax Credit (EITC).

This tax season, ACORN will conduct a grassroots door-to-door outreach campaign to help more families claim the EITC, to warn them about high-cost refund loans, and to let them know about free tax preparation sites.