Accreditation Mafia is Under Serious Challenge 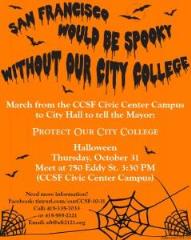 What a difference three months make! In the past few months the tables have completely turned on the Accrediting Commission for Community and Junior Colleges (ACCJC) which presides over California’s community colleges and has moved to revoke accreditation from City College of San Francisco (CCSF).
Not long ago the private agency seemed above serious criticism. The SF Chronicle and other mass media accepted their decisions without investigation or question. They were treated like the Supreme Court: judge, jury and executioner.

But times have changed. The policies and actions of ACCJC are now under serious review by public agencies near and far. Here are some of the significant events followed by what is upcoming.

But times have changed. The policies and actions of ACCJC are now under serious review by public agencies near and far. Here are some of the significant events followed by what is upcoming.

* August 13 – US Dept of Education determines that ACCJC was out “of compliance” regarding due process, conflict of interest and composition of the review team. This determination was the outcome of a 298 page complaint filed by California Federation of Teachers (CFT).

* August 21 – California’s Joint Legislative Audit Committee decides to launch an audit of ACCJC including how much it is costing community colleges to comply with their mandates. See the testimony of two state senators in a remarkable 10 minute video clip here (starts at 02:34:00).
http://calchannel.granicus.com/MediaPlayer.php?view_id=7&clip_id=1577

* August 22 – SF City Attorney Dennis Herrera files suit against ACCJC alleging bias, conflict of interest and retaliation. Significantly, he also filed a legal complaint against the Board of Governors of the California Community Colleges. The legal complaint accuses them of abdicating responsibility in turning over effective governance and supervision of California’s public community colleges to the private agency ACCJC.

* Right now (Fall 2013) the US Dept of Education and National Advisory Committee on Institutional Quality and Integrity (NACIQI) is conducting its once-every-five-years review of ACCJ. The Dept of Education recently notified ACCJC that their continued authorization is in question because they appear to be out of compliance with the basic requirement that their policies and standards be “widely accepted” amongst educators and employers. In response the head of ACCJC issued a most unusual request for letters of support. The LA Times covered the story here.

* Evidently the ACCJC is still short on letters of support. Last week on October 24, the Vice Chair of ACCJC (who is also head of Gavilan College) emailed all 112 California community college leaders. He denounced those who have questioned ACCJC and castigated the college leaders who have not yet written in support of ACCJC. His email reveals a deep hostility to faculty unions and his perspective that the only choices are accreditation as performed by ACCJC or else the “unions issuing accreditation certificates”.

In response, the chancellor of one community college wrote a rebuttal with an array of facts pointing to his conclusion that “ACCJC has fundamentally harmed the reputation of our entire system …. (and) not been objectively operating in the best interest of its member colleges for an extended period of time”.

The email exchange reveals the extent of ACCJC concern plus their mindset and inappropriate behavior. It is posted online here (see the Kinsella-cry-for-help document). CCSF supporter Alvin Ja has forwarded the exchange to the Dept of Education since it calls into question the validity of some letters in favor of ACCJC.

Meanwhile, coming down the pike ……

1. CFT attorney Robert Bezemek will soon be going to court seeking injunction and damages against ACCJC

2. A complementary lawsuit challenging the legal basis of the “Show Cause” ruling will be launched in coming days.

3. The Dept of Education and NACIQI continue their examination of complaints against ACCJC. In early December there will be public hearings in Washington DC. A small team CCSF (teachers and students) will be going to give personal testimony. The decision regarding ACCJC is expected in January.

4. The state audit of ACCJC is expected to begin in December.

But while ACCJC has come under increased scrutiny, CCSF continues to struggle:

* Negative publicity plus the disastrous decision to NOT distribute class schedules ahead of the Fall Semester has resulted in much lower enrollment.

* The outside appointed leadership has delayed coming to a settlement with the teachers union. Contrary to what some believe, CCSF faculty are currently paid LESS than faculty at many other community colleges despite living in an area with the highest cost of living. Readers can see and compare the salaries of faculty at all community colleges here. (113 page document from AFA at Santa Rosa Junior College).

* The same outside appointed leadership that seems to balk at signing a contract with the teachers, last week decided to revoke the two year old decision to move CCSF funds out of Wells Fargo Bank. The decision was made by the elected Board of Trustees as part of a nationwide effort to shift funds toward community banks and credit unions after national outrage over bank bailouts and unprosecuted bank misdeeds. One has to wonder: Is this how the outside appointed leadership of CCSF prioritizes its time?

* On the surface the newly appointed permanent chancellor, Arthur Q. Tyler, seems to be a bad fit. However there is a wait and see attitude. One can always hope for a nice surprise.

* Meanwhile faculty and administration at CCSF continue the time consuming work developing plans, procedures and decisions which are deemed necessary to respond to the ACCJC “policies and standards”. The Roadmap is posted online and is worth looking at since it reveals the bureaucratic and paper procedure nature of many of the requirements. It’s all about management. Never the less, CCSF faculty have poured thousands of hours into the task.

Despite all the challenges, the dramatic change in tides is clear. It is now ACCJC on the defensive and that augurs well for CCSF.

To those who support the struggle to save CCSF: Your Help is Still Needed!

Will you please go to the website http://www.saveccsf.org/ and donate to one of the important campaigns?

If you can, join the fun crowd at the Hallowe’en March this Thursday!

In the next few months, and possibly in the coming weeks, it should become clear whether ACCJC’s disastrous reign and rulings are finally stopped.

If that happens, accreditation can return to what it is supposed to be about: ensuring quality and improving education.

And then CCSF can return to being what it was, but better.

——————————
Rick Sterling is a retired electronics/aerospace engineer. He is an independent journalist currently working on education and international issues, especially Syria and Honduras. .
——————————