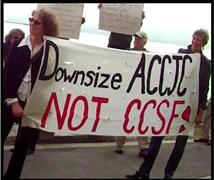 Most readers are well aware of the crisis at City College of San Francisco (CCSF) and the charges & counter-charges with the Accrediting Commission for Community and Junior Colleges (ACCJC). What many people are NOT aware of is that criticisms of the Accrediting Commission ACCJC did not begin with CCSF. On the contrary, criticisms of ACCJC have been building for many years and the crisis at CCSF is the culmination and climax.

State Chancellor Brice Harris and Special Trustee Robert Agrella have said repeatedly that CCSF faculty and staff should not engage in criticism of the ACCJC and its decisions; they should strictly focus on complying with the “standards”. Faculty and staff have worked hard for 18 months at making changes as demanded by the ACCJC. That was never in question.

What WAS and STILL IS in dispute is whether it is appropriate and necessary to question and criticize the evaluation, actions and policies of the ACCJC. There are three law suits against the ACCJC in progress: one by the SF City Attorney, another by the teachers union AFT and a third by the activist coalition SaveCCSF. In parallel, there are numerous other actions which are beginning to put a much needed spotlight on ACCJC.

Following are some of the reasons to conclude that ACCJC is a “troubled institution”. What is at stake is not just the future of CCSF. Rather, the outcome of this conflict will have large repercussions for ALL California community colleges.

DO ACCJC ‘STANDARDS’ FAVOR PRIVATE AND ‘FOR PROFIT’ COLLEGES ?

In June 2013 ACCJC decided that CCSF accreditation should be terminated in a year. At the same time they determined the status of 13 comprehensively reviewed colleges. Of these:
1 was put on Probation,
6 were put on Warning,
5 were re-affirmed but with Follow up Report required
1 received unqualified reaffirmation.

One can see from the above data how “liberally” the ACCJC has been applying sanctions. This has been their pattern for many years.

The only college to receive unqualified reaffirmation from ACCJC was the private for-profit San Joaquin Valley College. SJVC is a career college with tuition ranging from $14 – 29 thousand per school year.

Ironically, while ACCJC was very satisfied with SJVC, California state education authorities are not. SJVC is no longer eligible for Cal Grants because of the high rate of student loan defaults. It appears ACCJC “Standards” favor certain types of college and administration, irrespective of their academic quality.

ACCJC policy on “Integrity in Relations with the Accrediting Commission” requires colleges to “comply with Commission requests “. The consequence if you do not comply with a request: “Failure to do so is sufficient reason, in and of itself, for the Commission to impose a sanction, or to deny or revoke candidacy or accreditation. (34 CFR 668 – misrepresentation.) ”

There is no other accrediting agency which has a policy requiring absolute institutional obedience to “requests” upon penalty of loss of accreditation.

ACCJC uses the word “integrity” in a bizarre manner, without regard to its normal meaning.

San Mateo CCD Chancellor Ron Galatolo is openly critical of the ACCJC. In a letter to other Community College Chancellors he wrote:

“[T]he benefits of accreditation and of a regional accrediting agency are not in question. The issue is ACCJC’s inconsistent application of its own standards; its punitive focus on compliance – irrespective of relevance; its imposition of numerous sanctions; its preferential treatment of its own Commissioners; and its indifference to the application of reasonable due process.

“The action by the ACCJC to terminate the accreditation of City College of San Francisco (CCSF) was not only an egregious error in judgment of epic proportions, but it solidified – at least for me – that the ACCJC has fundamentally harmed the reputation of our entire system and reinforced my belief that the ACCJC has not been objectively operating in the best interest of its member colleges for an extended period of time.”

When asked directly why he does not express reservations or criticism of the ACCJC decision regarding CCSF, Chancellor Harris told this writer he is “afraid CCSF would lose its accreditation” if he did that. With immense power to create problems for colleges, the ACCJC seems to have been acting as a bully able to define and change California Community College priorities.

FIVE YEARS OF CONCERN ABOUT ACCJC

In the past five years there have been many events which demonstrate the opposition and/or high concern about the policies and actions of ACCJC:

* In 2009 there was a unanimous vote of no confidence by a major faculty organization. If you have not read it previously, it’s worth reading in full because all of the points have since been made and remade by others.

* In 2010 a state level Task Force including all major constituents met and came up seven recommendations for ACCJC, trying to persuade the Commission to be more collaborative. The recommendations were all effectively dismissed by ACCJC.

* In 2010 the US Dept of Education (USDE) determined that ACCJ was out of compliance in the selection of the Accrediting Commission, their definitions and lack of transparency.

* In 2011 the Research and Policy Group concluded a 21 month review and comparison/contrast of ACCJC with other accrediting agencies, arriving at a number of diplomatic criticisms and recommendations to improve ACCJC relations.

* In 2013 there was a USDE determination that ACCJC was out of compliance in their evaluation and action against CCSF.

In addition to the above there are a large number of resolutions and statements from national and regional academic organizations and others criticizing the secrecy, misplaced priorities and punitive approach of ACCJC. Some of these can be seen here.

Crisis at CCSF has been Manufactured

The ongoing crisis and damage to City College of San Francisco (CCSF) is completely unnecessary. Whatever financial and administrative problems existed, they could have been addressed and corrected if the Accrediting Commission ACCJC had put the college on Warning or Probation. Especially because CCSF had never previously been on ANY sanction, that would have alerted the Board of Trustees and sparked action where needed.

Instead of applying an appropriate sanction, if any was called for, ACCJC created a crisis that has been the major factor leading to public confusion, demoralization, huge loss of enrollment, increased financial problems, and educational and administrative chaos. Recently it was reported that $503K has been spent on marketing consultants and advertising campaigns trying to counteract the destruction. Now, in the wake of negative news followed by bad decisions by newly installed leadership, the City and State Chancellor’s Office are both pouring money in to support CCSF.

Ironically, or tragically, the ACCJC decision to terminate accreditation was made in part BECAUSE OF the confidential testimony of Trustee Agrella. His testimony, along with that of the outside appointed Interim Chancellor Scott-Skillman, undermined the overall positive “Show Cause” Evaluation Team Report.

It is a bizarre situation where people with near zero history or knowledge of CCSF have assumed the right to take decisions and speak for the college even though they contributed nothing to its noble history, openly admit they knew nothing of the college’s deep connections with the community, and seem to have undermined the institution at a critical juncture.

WHO IS ACCOMPLISHING THEIR MISSION?

ACCJC emphasizes the need to align actions with mission. The mission of CCSF is to promote successful learning and student achievement. By all measures including official state statistics, public support and student polls, CCSF was consistently succeeding. The 2006 Comprehensive Evaluation report described CCSF as a “premier college in the region” with “enormous success”. Was it perfect? Of course not. Were there administrative and financial problems that needed to be addressed? Yes. But the fact remains that it was largely SUCCEEDING in its mission.

Let’s compare that with ACCJC. According to the US Department of Education , “the goal of accreditation is to ensure that education provided by institutions of higher education meets acceptable levels of quality.” ACCJC describes its purpose as “improving and validating the quality of post secondary education”.

How is ACCJC doing?

Instead of improving post-secondary education, their actions have caused enormous damage. Instead of validating and encouraging improvement for the public benefit, their actions have created confusion and chaos resulting in many thousands of potential students dropping out plus huge financial losses and unnecessary expense.

Accreditation is supposed to be a collaborative process insuring and improving education quality. As the history of ACCJC shows, they have been acting contrary to that purpose for years. They are, to say the least, “troubled”.

The betrayal of CCSF by outside appointed leaders is partly because they have demanded everyone treat ACCJC as it is supposed to act, instead of the way it actually does.

———————————–
Rick Sterling is an independent journalist.
He can be reached at rsterling1@gmail.com.