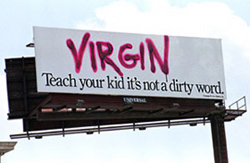 Abstinence may make the heart grow fonder, but it sure doesn’t stop teens from doing what comes naturally. That’s the lesson the U.S. Government just learned from a study conducted by Mathematica Policy Research on four of the nation’s Title V Section 510 Abstinence Education Programs for America’s youth. According to the results of the study, kids who receive abstinence-only training are just as likely to engage in sexual activity as those who don’t.

Created in 1996 by an attachment to the Welfare Reform Law, the abstinence programs require the teaching of no-sex-whatsoever-until-marriage in states that elect to participate (and receive federal dollars). Even the mention of condoms is prohibited. In fact, a 2004 report issued by California Congress member Henry Waxman revealed that much of the information used in the abstinence-only programs misleads kids about the risk of sex and contraceptive devices, such as condoms. Of course, a discussion of queer sexuality is not even included in the curriculum.

At a price tag of $1.5 billion since 1996, the abstinence-only programs are, as James Wagoner of Advocates for Youth so aptly put it, an “ideological boondoggle of historic proportions.” Not to mention outright irresponsible at a time when kids desperately need accurate and frank information to help them protect themselves from sexually transmitted diseases, unwanted pregnancies and AIDS.

The Mathematica and Waxman studies aren’t the only ones to discredit these sex-negative programs. In December, another piece of research showed that teen pregnancy has dropped in America, but not because young people are abstaining. On the contrary, they’re using better protection.

The study, published in the Journal of Public Health in December, called abstinence-only programs “misguided.” It said that 86% of the decline in teen pregnancy among 15-19 year-olds was due to the use of more effective contraception. Among 18-19 year olds, safe sex was responsible for a 100% drop in unwanted bambini. According to researchers, the results are no different than what has been discovered in other countries.

It all makes perfect sense.

Which is why Congress should now discontinue the abstinence-only programs and fund real sex education that tells it like it is about sex, contraception and how to protect oneself against STDs and AIDS. Not to mention a positive discussion of queer sexuality. In European countries where sex is presented positively to teens, the rates of pregnancies, STDs and abortions are lower than here in the U.S.

As Karen Pearl, Interim President of Planned Parenthood of America, said, “We already know that comprehensive sexuality education programs have been proven to be effective.”

In terms of sex education for America’s youth, Congress gets an F.

Tommi Avicolli Mecca is a radical, southern Italian, working-class atheist queer writer and performer whose work can be seen at www.avicollimecca.com.