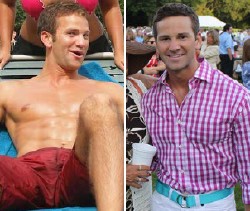 America just can’t hate them. By day, they project that altar boy innocence, blasting “immorality” at every turn and sounding more like snake-oil TV evangelists than politicians in a democratic society. They vote against gay marriage and a woman’s right to choose. When no one’s watching, they slither around clandestinely looking for the forbidden, whether in an airport bathroom or the arms of a male hooker.

They’re the closeted politicians. As much as our country says it hates homos, adulterers and other “sinners,” when these guys get caught, they make their televised act of contrition and all is forgiven. Some even re-invent themselves and come back out into the limelight to find that in America, there’s still a sucker born every second.

Sherry Vine hates these fools as much as I do. A New York-based drag star famous for her parodies of Madonna and other performers, Vine has just released a great video, “You’re a Homo” (it’s on YouTube, of course), a takeoff of Lady Gaga’s “Alejandro” that not only gives some conservative politicians a good swift kick out of their closets, but actually shows their pictures, so there’s no denying who they are.

Among the outed are Governor Charlie Crist of Florida, Congressman David Drier of California, and Larry Craig, former Senator of Idaho. Craig was caught playing footsies in a men’s room stall, so his inclusion is not surprising.

Equally unsurprising is Aaron Schock of Illinois, a new arrival to Congress whose shirtless pose by a pool has earned him big points with his constituents. Talk about appealing to the masses!

Inquiring minds have been asking the obvious: Can a 29-year-old who spends a lot of time in a gym and wears pink shirts really be straight? Sure, he’s against gay marriage and supports discrimination against queers in the military, but since when has that ever meant someone was on the straight and narrow?

As Sherry Vine puts it at the start of her video, “I know that you are scared and I know that you like to hide in your secret world, but I just can’t let you get away with it anymore. You’re a homo.”

Outing politicians is nothing new. Queer groups in the late 80s and early 90s outed without apology, publicizing the names of those who vote with the bible thumpers but hump with the party crowd. For many in the LGBT community, it crossed a line that some still do not feel comfortable crossing.

But as Sherry Vine demonstrates, it’s such wicked fun, who can resist? Not someone who can obviously give Madonna and Lady Gaga a good run for their money.