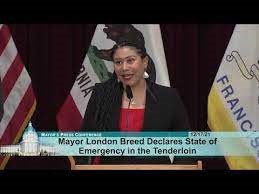 Nearly one year ago San Francisco Mayor London Breed declared a State of Emergency for the city’s Tenderloin neighborhood. It quickly became national news. The media loved portraying the mayor of “liberal” San Francisco as calling for a crackdown on crime—-it made for such a good story that there was little follow up when the crackdown never happened.

I described the lack of action associated with the Emergency Declaration as the “gaslighting” of the Tenderloin. (See “The Gaslighting of the Tenderloin,” February 28, 2022). People locally and across the nation were led to believe San Francisco was moving to close open drug markets in the Tenderloin—yet no action plan ever existed.

Not only did a police crackdown never happen, but officer visibility in drug hot spots never increased. Not for a single day.

Stanford Sociology Professor and MacArthur “Genius” award winner Forrest Stuart has been working on Tenderloin crime issues since the summer. Using publicly available records he created this chart that highlights how the Emergency Order impacted arrests for drug sales: 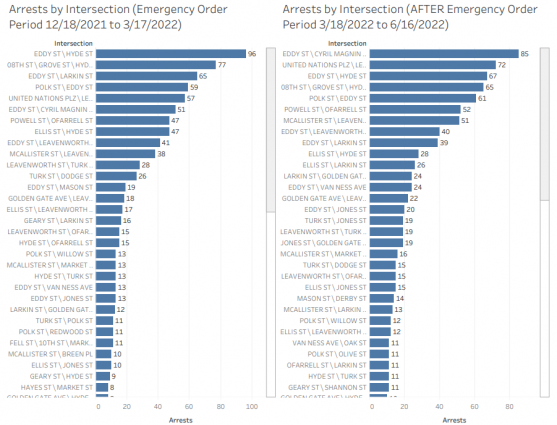 Not much difference, is there?

Why was the Mayor’s Emergency Order, which the Board approved on December 23, 2021, not implemented? It’s a question the media has not pursued.

Mayor Breed issued the Declaration after meeting with Tenderloin families demanding action. The mayor thought that declaring an emergency would push the SFPD and District Attorney to treat the drug crisis with urgency—but neither did.

That former DA Chesa Boudin would not support a crackdown was understandable. But why was the Mayor was unable to get the SFPD to add officers to the Tenderloin?

It remains a mystery.

There has not been a single week or even a few consecutive days in the past year that dealer hot spot blocks were cleared.

Not a single week!

SFPD knows how to prevent criminal activities—it flooded Union Square with officers and it worked. But it has never  installed fixed officer posts on the Tenderloin blocks with open drug markets.

Tenderloin residents and workers have repeatedly told Chief Scott and top SFPD officials that increased officer visibility is essential. The Chief and commanders hear this, agree,  and then there is no follow through. When I walk through the neighborhood I rarely see a single beat officer—and my experience is quite common.

The police inaction leads many to believe the SFPD wants to keep the Tenderloin a drug dealer containment zone. It can’t say that publicly. It has to act upset about the drug markets. But when Chief Scott told supportive housing providers two weeks ago that it would help if they could identify drug dealer hot spots—as if he and the SFPD didn’t already know!—then the gaslighting strategy seems in play.

Mayor Breed does not want dealers openly selling in the Tenderloin. But the SFPD’s failure to respond to the Emergency Order or her subsequent pleas for closing Tenderloin drug markets shows the SFPD has different priorities.

That’s why I’ve long called on the Mayor to replace the Chief (See “Mayor Breed Must Replace Chief Scott,” February 28, 2022). The SFPD’s failure to commit necessary resources in the Tenderloin  requires a leadership change. While Chief Scott has all the attributes of a great leader, the officers on the ground are not listening to him.

The problem may be that the SFPD is incapable of closing the international drug cartels working only five minutes from City Hall. If this is what SFPD’s leadership believes, then San Francisco faces a choice: keep deadly Tenderloin drug markets thriving through 2023 and beyond or urge Governor Newsom to send in the National Guard.

The latter strategy is the only one that makes sense.

The National Guard’s purposes include efforts to counter-drug efforts and address domestic emergencies. Both directly apply in the Tenderloin.

San Francisco has already declared a Tenderloin Emergency. It expired but if the Board of Supervisors needs to reenact it to qualify for the National Guard I believe the votes will be there.  The Tenderloin also qualifies for the Guard because its focus would be to counter drug dealing. So it’s a perfect fit.

(Editors Note: On same day this story appeared President Biden extended the declaration of a national emergency for illegal drug activities. So the prerequisite for Governor Newsom dispatching the National Guard to the Tenderloin has been met).

If Governor Newsom sent the National Guard to the Tenderloin, drug dealers would be gone from their longtime workplaces on Hyde and Eddy within days. They’d soon be gone from the entire neighborhood.

Don’t Tenderloin families, small businesses, and other neighborhood residents and workers deserve an end to constant dealing in their community? After a thirty day break from nearly three years of open drug markets all of San Francisco would recognize how a great San Francisco neighborhood has been unfairly tarnished.

Those opposing bringing in the National Guard need to offer an alternative strategy. Please don’t promote the fantasy that opening safe injection sites will close down the drug cartel—we had a safe site at the Linkage Center and it did nothing to reduce open drug sales.

San Francisco is all behind Urban Alchemy and the use of Ambassadors. But ambassadors can’t close the drug cartel. We have Urban Alchemy staff working across the street from drug hot spots—yet they need police to deal with potentially violent dealers.

The National Guard can deal with the dealers.

Governor Newsom, you love San Francisco. I know you are upset about what you see happening in the Tenderloin. You can deliver a wonderful holiday gift for the entire city by agreeing to send in the National Guard to protect the Tenderloin.

Many Tenderloin small businesses are on life support. Although most neighborhood blocks have no dealers the visible drug markets on Hyde, Eddy and Larkin discourage people from coming to the neighborhood. For a city that claims to care about immigrant and women-run businesses, the lack of protection for those operating in the Tenderloin is shameful.

San Francisco talks of its high ideals. It’s well past time to start applying these values to the Tenderloin.

I encourage those interested in the Tenderloin’s long history of success and City Hall’s role in its decline to read my book, The Tenderloin: Sex, Crime and Resistance in the Heart of San Francisco. With 118 historic photos!