A Trigger We Can Believe In 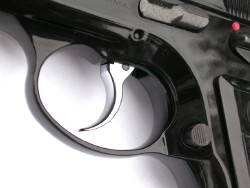 Olympia Snowe wants a trigger. It sounds like the Blue Dogs want a trigger. Let’s give them a trigger we can all believe in.

How about if the insurance companies cannot cover everyone by a date certain, we blow up the whole health care reform process and make everyone eligible for Medicare? We won’t have to argue over opt-ins or opt-outs. We won’t have to argue over who’s eligible for a public option. Let’s let everyone in. It won’t take very long, nobody will need to enroll; just take your Social Security card to the Doctor and the bill will be paid.

Blue Cross and Blue Shield can move into a new market. They can start insuring complicated bank transactions like derivatives. It might even be a good thing, A bank that has pre-existing bad investments would be denied coverage.

Seems we were willing to compromise and accept a public option; they didn’t accept the compromise, so let’s up the ante.

OK, it won’t happen, just a thought I had. So let’s get back to reality.

With “Traiter Joe” (Lieberman, I-Connecticut) and a few Blue Dog Democrats throwing a tantrum and refusing to vote to end a filibuster if the public option is still in the bill, Sen. Harry Reid (D-Nevada) is faced with a dilemma. He either needs to come up with a public option that is weak enough to get “Traiter Joe” and the blue dogs to agree to allow it to come to a floor vote in the Senate, or add a trigger. Both are terrible options, but they may be the only options left.

There is a misconception out there that after conference with the House, there is not a need for 60 votes in the Senate. While it is true that the conference report will not be open to amendments or debate, there will likely still be a cloture motion prior to a vote on the conference report. The need to get over that 60-vote hurdle means the final public option will likely be whatever comes out of the Senate debate that is underway.

So here is what I think could save the day. Give them the trigger or the new proposal being hashed out that Sen. Tom Carper (D-Delaware) is calling a “trigger with a hammer.”

I hear you, this could be a disaster, but I wouldn’t stop there. I suggest adding another trigger. The mandate that everyone buys in should also be delayed until there is either a public option or it can be shown that other parts of the bill have been successful in creating plans that everyone can afford.

While this is not ideal, it would at least provide a buffer zone to see if the reforms will succeed at bringing down costs. It would allow future legislation to correct flaws in the bill before people are forced to buy in.

The public debate so far has been over the public option, while under the surface people have been complaining about the mandate. It is time to let the president and Congress know that without a strong public option, or proof that health care costs to the consumer have gone down, there should be no mandate to buy in.

This piece was first published on Friday, December 4th at Truthout.org