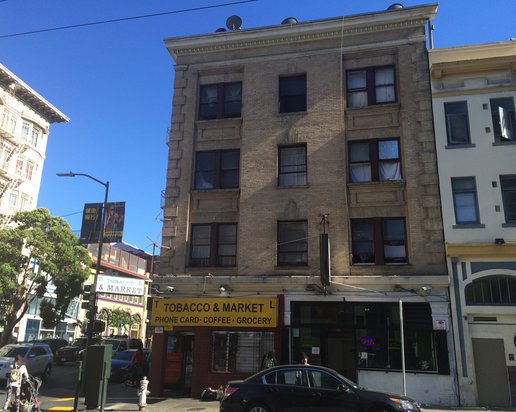 On the day the story appeared, I heard from Sam Patel, who leases buildings to the city to house homeless persons and has worked hard to improve the Tenderloin. He told me he spoke to owner Subhash Shastri and that Shastri recognized the importance of hiring a guard.

On Thursday, September 3, the guard began working in front of the smoke shop  from 6am-2pm. This followed the city’s installation on August 31 of a security gate covering the steps of the senior center’s entrance at 333 Turk Street. The Curry Senior Center has also hired an overnight security guard to patrol their property, which has been the target of break-ins by those coming over from the Page Hotel.

Collectively, these measures should reduce longstanding safety problems at Turk and Leavenworth. If the installation of a security guard has the impact it had at the Adrian Hotel at 493 Eddy, seniors will no longer have to evade drug deals as they seek meals and medical treatment.

Another apparent Tenderloin crime breakthrough last week was the San Francisco Chronicle’s relearning where the Tenderloin actually is located. After a top of the page SF Gate headline about a “Tenderloin knife fight leaving one man dead and another in jail,” longtime Tenderloin activist Kathy Looper informed the Chronicle that the story itself reported the  incident occurred not in the Tenderloin but on Sixth Street between Market and Mission.

Looper quickly heard back from SF Gate’s Bill Hutchinson. He said he was new to the area and was sorry for the mistake. He revised the story to shift the grisly crime to the South of Market where it actually occurred). While the false Tenderloin headline still topped SF Gate for several hours, at least it was corrected.

I’ve been complaining to San Francisco media for decades about wrongly placing crimes in the Tenderloin. It’s not about an adjacent block here or there, but rather the labeling of crimes on Nob Hill or deep in South of Market as occurring in “the Tenderloin.”

I note in my book on the Tenderloin that in the 1970’s drug crimes as far away as the Western Addition were wrongly placed in the Tenderloin. It’s as if the media were trying its best to convince the public that they would be safe in San Francisco if they just stayed away from the Tenderloin neighborhood.

That’s why continuing to wrongly place crimes in the Tenderloin—in this case a vicious South of Market stabbing—is not trivial. It deters people from patronizing Tenderloin businesses and coming into the neighborhood, Such falsehoods also  demonize the San Francisco neighborhood whose residents have fought longest and hardest for increased public safety. They are in fact making progress block by block,

The Tenderloin has more than its share of crimes. But no other San Francisco neighborhood routinely has out of area crimes placed within its boundaries (and in case anyone thinks this is due to uncertainty over the Tenderloin’s geography, everyone knows that SOMA, Western Addition and Nob Hill are not the Tenderloin).

Until I saw Hutchinson’s response Beyond Chron was going to start a contest whereby we would pay reporters $25 for every crime story on the Tenderloin they got right in exchange for their agreeing to donate $10 to the Tenderloin Museum for every crime wrongly placed in the neighborhood. Hopefully such a financial incentive to get the facts right on crime stories will not be necessary.

Randy Shaw is Editor of Beyond Chron and the author of The Tenderloin: Sex, Crime and Resistance in the Heart of San Francisco