A Tenderloin Breakthrough in 2020? 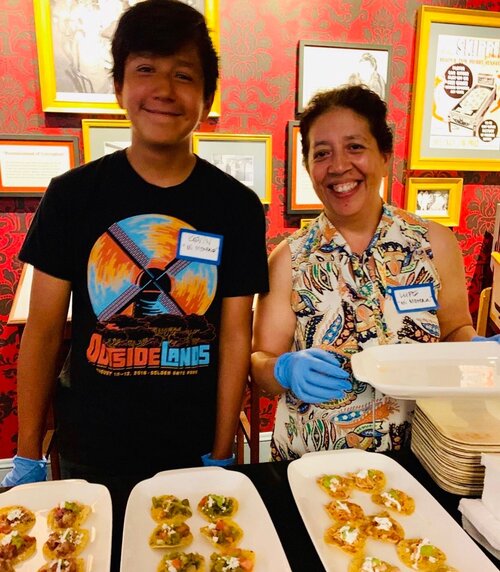 After a Tough 2019, Tenderloin Will Move Forward

As I begin my 40th year working in San Francisco’s Tenderloin (the Tenderloin Housing Clinic, which I co-founded, celebrates its 40th anniversary in February), I realize that projections of progress have often fallen short.  After the Tenderloin won an historic battle with luxury hotels in 1980 and had steady progress and the opening of a Sizzler restaurant in 1986, many of us thought the neighborhood’s upward progress would continue; but as I describe in The Tenderloin: Sex, Crime and Resistance in the Heart of San Francisco, the Tenderloin’s quality of life instead sharply reversed.

I wish I could say that I foresee in 2020 the city ensuring the same level of public safety and freedom from drug activities on Tenderloin sidewalks as it does for gentrified neighborhoods. I know better than to predict that.  But I do see the Tenderloin taking major steps forward, particularly because projects projected for 2019 will now open.

I was involved in conceiving this project in former Supervisor Jane Kim’s office in May 2016. None of us imagined it would not open until Summer 2020.

Why the delay? Staggering increases in construction costs that effectively doubled the project’s budget.  The community mobilized to get more money from the city (which owns the site) but raising private and public money caused delays. When 2019 there was talk of a posssible soft November opening but now it’s summer 2020.

I have no hesitation predicting this project will be amazing. It will reframe the public marketplace concept from an upscale eating environment to one serving working-class residents.  turn the long troubled 101 Hyde site into a destination, as workers from around the area will flock to the quality food and vibe.

Hastings Law School opens its new building across the street from La Cocina in spring 2020. It’s almost as if this were perfectly timed to bring customers to the marketplace when school begins its fall term.

These two projects will reduce drug activities on the long troubled stretch of Golden Gate Ave between Larkin and Hyde.

When this project was before the Planning Commission in March 2016 I described it as “the most positive private housing development project proposed for the Tenderloin in decades.” It now opens four years later, in May. The addition of over 300 residents to a long vacant block will increase retail activity in both Mid-Market and the Tenderloin, particularly on evenings and weekends. The increased foot traffic will improve public safety in an area long troubled by drug dealing.

As hard to believe as this sounds, this is the first new for-profit housing to open in the Tenderloin since the KGO lofts in 2013. The adjacent project at 1028 Market is projected to open at the end of 2021.

The SF Housing Authority’s 2016 departure from its offices at 440 Turk transformed the entire block from Hyde to Larkin into a hub for drug activities. It was so bad on that block during 2019 that my organization’s staff often had to request police intervention to gain entry into our offices. This office is the main entry point for people moving from Navigation Centers to housing, yet they often had to wade through verbal harassment to even reach our housing counselors.

Why the city did not anticipate the impact of a multi-year vacancy at the site is a mystery. But City Hall has often caused Tenderloin problems (my book identifies George Christopher’s election as mayor in 1955 as triggering the Tenderloin’s long decline).

The Department of Homelessness and Supportive Housing was supposed to have moved its 100 plus employees into the space over one year ago. But ongoing problems with the building delayed their occupancy until January 7-9 2020.

This occupancy at the year’s start has to improve the block. It also brings more customers to Little Saigon and other area restaurants.

My Tenderloin books charts the neighborhood’s shared history with Mid-Market. And that pattern has continued in recent years. The 6 x 6 shopping center at 945 Market was expected to boost both areas, and its long vacancy due to a weakening retail market hurt both neighborhoods. Fortunately, last August TMG Partners and Alexandria Real Estate Equities bought the property.

Both companies know how to revitalize commercial spaces. Any occupancy in 2020 would be a plus and I expect a full building by 2021. I was a big backer of the original project, which was named CityPlace. My July 9, 2010 article touted approval of the project as a “giant leap forward on Mid-Market’s revival.” But due to the standard city delays, the project got approval just as the national economic meltdown cost the developer their financing. The project ultimately was auctioned to a Texas developer who completed it in 2016. It has been vacant ever since.

Mid-Market is also advancing from the Shorenstein project, the continued construction at the new Trinity Plaza (whose apartments and Whole Foods will be completed in 2021), and ongoing constructon at 1028 Market and the the condos and hotel at 950-974 Market, all of which will open by 2021.

The long awaited Son and Garden at Farmhouse Kitchen at Eddy and Polk was also supposed to open in 2019. Now its projected for February 2020. Based on my observation of the ongoing work it appears on track.

This will bring a destination restaurant to the Tenderloin, as Farmhouse Kitchen is beloved in the Mission. This will be a different menu but I expect to see full occupancy as soon as it opens.

A new Korean restaurant by the owners of the popular Barnzu on Geary should open up on Hyde between Turk and Eddy by mid-year. This opening was also projected for 2019 but ran into the familiar hurdles all restaurants face trying to open in the city.

In 2016, Bon Appétit named the Richmond District’s Arsicault the country’s best new bakery. So when Eater San Francisco announced in October 2018 that the owner was expanding to 83 McAllister bordering the Tenderloin, we assumed a 2019 opening.

But the new, 3000 square foot Arsicault did not open. A major delay was caused by a broken window whose replacement had to be custom designed and sent up from Los Angeles. I see Arsicault becoming the go-to café in the area,  and am told it will open “soon.”

As recently reported, Azalina’s is moving its popular Malaysian restaurant in the Twitter building to Leavenworth and Ellis in the Tenderloin. It will be a block up from the Tenderloin Museum and the Black Cat. A mid-year opening is expected.

Sean Sullivan’s new condos on the 700 block of Larkin (at O’Farrell) were completed (and I am told were all sold) in 2019 but his commercial spaces have not opened. A Thai dessert shop connected to the nearby Lers Ros/Esan group will take one of the spots

Starcity’s 55 room project at 229 Ellis opens in early 2020. Another case of adding retail customers for Tenderloin businesses and increasing positive foot traffic in the area.

TNDC will begin construction at the former garage at Turk and Larkin. Seamus Naughton will break ground this year on housing at 135 Hyde. I’m told that the Forge Development project underway next to 351 Turk could open by the end of 2020, though that seems overly optimistic.

I spent over five years trying to open a Tenderloin Museum. It’s now its entering its fifth year of operation. Expect a big announcement from the museum soon, one that will greatly impact the neighborhood.

D6 Supervisor Matt Haney has done a great job highlighting the unfairness of the city disproportionately placing Navigation Centers and other homeless services in only a handful of neighborhoods. Yet the city still allows tents to block sidewalks 24 hours a day when this would never be allowed in the city’s   gentrified neighborhoods (like the Sunset, whose supervisor resists homeless services). These round the clock tents create a protected area to use and sell drugs, and they leave a disproportionate amount of trash.

With so much new investment coming into the Tenderloin, let’s hope that 2020 finally brings residents, small businesses, workers and property owners the sidewalk safety they deserve.

Randy Shaw is Editor of Beyond Chron and Director of the Tenderloin Housing Clinic. He is the author of The Tenderloin: Sex, Crime and Resistance in the Heart of San Francisco