A Taste Of Tough: Read This if You Think Your Job is Hard 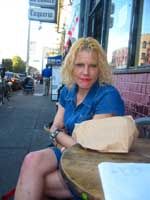 When Margarita was just 11 years old, she ran away from home. Strange to think that a girl from a well-off family, who was a successful athlete, would do such a thing. But when it came down to it, she just didn’t want to be told what to do anymore.

Her travels led her to Los Angeles, where she got caught up in a gang, spent a significant amount of time in prison, and eventually attended nursing school. But she is unable to put her nursing skills to use. Nowadays, it is obvious that this 35-year-old sex-worker forges through life with the same attitude she ran away with as a child. And she does so with an unexpectedly positive attitude, despite the nature of her profession.

“My job is one of the toughest in San Francisco. It’s scary. Every time you hop into a car you don’t know if you’re coming back or not,” said Margarita, who carries a pistol wherever she goes. Yet, there still remains a higher authority in her life.

Margarita is addicted to heroin. She uses it to numb the pain of her profession, but also claims that it is heroin that caused her to become involved with sex-work in the first place. Margarita needed a way to fund her addiction, and one day a street-savvy woman pointed her in the direction to some fast cash – charge a man $150 for a hand-job or a blow-job. It was such quick and easy money, said Margarita, that she became addicted to the job itself. But it wasn’t that easy. “The first time I did it I couldn’t believe it,” she said. “I was flabbergasted.”

Thus began a seemingly endless cycle for Margarita, where, depending on which way you look at it, an addiction to fast money feeds her drug habit, or a dependence on drugs forces her onto the streets in search of an unsatisfied man with cash in his pocket. At this point in her life, however, it doesn’t really matter which came first – the dope or the prostitution – because Margarita doesn’t want to live like this for the rest of her life.

She has plans to go to a clinic to get methadone this week. She has been successfully off heroin in the past, most recently to carry a pregnancy to term. Her child is now two-and-a-half years- old and lives with her sister-in-law. Her husband, and the father of her child, is currently serving time in prison. Margarita is using again and has been a sex-worker for four years now.

When asked how she feels when she sells her services, Margarita says that she hates it. She says that it makes her cry. The look on her face when she describes these feelings shows much more than her words tell. Margarita is charismatic and animated when she talks, but speaking directly about how her job affects her caused her to slow down – the presence of deep thought shows through her face, which becomes suddenly sullen. Her eyes stop being able to look directly into mine and turn downward with stone-cold rumination.

“I try to stay positive. It’s easy because I’m a business woman,” said Margarita. Her tone of voice is maybe a little too convincing – like she is trying to reassure herself of something. Considering everything she has been through, her ability to do even that is astonishing, as is her genuine smile and witty sense of humor. When we set up our interview, she suggested we meet in a room at the Hilton.

“People out here look down upon me but I just look at them and laugh,” said a confident Margarita. “[They] don’t know me.” She goes on to state the problem with the way people judge others. Giving an example of a child who is raised in a ghetto where mom sells herself and dad sells drugs, she says that the child will grow up not knowing any different. Furthermore, she said, there is nobody in that ghetto who is going to show them. “Who are you to judge anyway,” she said.