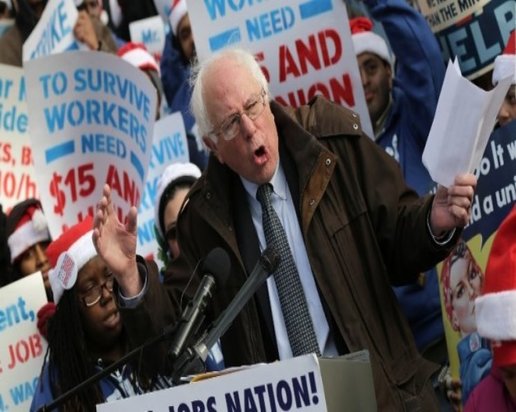 The summer of 2015 has seen the American people expressing sharp discontent with the status quo. On the right, we have Donald Trump. On the left, we have Bernie Sanders, ongoing protests by Black Lives Matter, and the continued push for minimum wage hikes and economic fairness waged by Fight for 15.

Summer is usually a quiet political time. That’s why the Tea Party had such success storming Town Hall meetings in the summer of 2009; nobody expected it.

While the Watts (1965), Detroit (1967) and Newark (1967) riots occurred in the summer, those protests were unplanned events incited by specific police misconduct toward blacks. This summer’s activism has seen huge turnouts for planned rallies and actions.

Is this summer the start of something bigger? And will progressive discontent be subordinated to the 2016 presidential race, or can it drive and shape the national Democratic ticket?

I argue in The Activist’s Handbook that one reason the Occupy movement declined was that the onset of 2012 began the focus on presidential election politics. After benefiting from the lack of competing national political news when it launched in the fall of 2011, even a more organizationally-oriented Occupy movement would have had trouble getting attention once the 2012 campaign season began.

The difference between Occupy and Black Lives Matter is that the former openly disdained electoral politics while the latter has already made headlines by pressing Sanders, Clinton and other candidates around its issues. Activists recognize that riding the media coverage of the presidential race highlights rather than obscures their agendas, and this should continue into 2016.

The Iowa caucuses are not until Feb. 1 2016. That ensures that activists discontented with politics as usual will be out in force at least until then. While the media will soon be diverted to Obama’s fights with Congress on a range of issues, the presidential race ensures activists a platform.

So I think the 2015 summer of discontent is only the beginning. The harder question for the left is what happens after the presidential nomination contest ends. Will grassroots activism be subsumed by the fall presidential race, or can left activism instead help drive the Democrats’ national campaign?

In 2000, grassroots movements were on the rise following the successful “Battle in Seattle” WTO protest at the end of 1999. Yet progressive Democrats were deeply disappointed with Bill Clinton’s eight years of triangulation after becoming the first Democrat in the White House since Jimmy Carter. Some joined the Green Party and worked for Ralph Nader. Others sat on their hands in the fall of 2000 out of lack of enthusiasm for Democratic presidential nominee Al Gore.

The progressive discontent in Barack Obama’s seventh year differs from 2000. While Obama sometimes falls short (most recently on trade), he has been far more progressive than Clinton and did get a lot of his progressive agenda done.

But it’s not enough. Progressives want a political system that advances rather than worsens social and economic justice, and realize that relying on politicians to do the work will not get it done.

A smart Democratic Party presidential nominee—and both Clinton and Sanders qualify—harnesses the energy of the discontented forces on the left and runs a fall campaign running on a progressive agenda. That’s what Obama won by doing in 2008 and Gore put himself in a position to have the election stolen from him by not doing in 2000.

Clinton and Sanders know they cannot mobilize their base by running on Obama’s record. And with police continuing to wrongly shoot African-Americans, cities like Chicago becoming homicide hotbeds (6 killed and 35 wounded last weekend alone), and the 99% continuing to not get their fair share, American politicians ignore widening discontent at their peril.

2016 is still a way off, but the seeds of next year’s politics were sown this summer.