A Portrait of Two Neighborhoods: SBC/AT&T-Mission Bay vs. Fenway 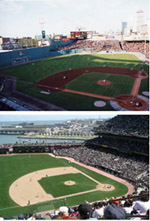 As a baseball fanatic and native Bostonian, I have watched both the Boston Red Sox and the neighborhood surrounding Fenway Park flourish over the past 10 years. What was once an almost-there baseball franchise that seemed to play just well enough to choke at every crucial opportunity en route to a World Series victory, finally “reversed the curse” in 2004. By doing so, the Sox vindicated years of crushing defeats at the hands of the hated 2003 New York Yankees, the 1986 New York Mets, the 1975 Cincinnati Reds, the 1967 Cardinals, and so on. The San Francisco Giants on the other hand, still have a lot to overcome. “Los Gigantes” have not won since 1954, when they were still the New York Giants playing at the Polo Grounds when Willie Mays and Johnny Antonelli were the stars. Since moving to San Francisco, first to Candlestick Park, and then Pac Bell/SBC/AT&T Park in Mission Bay, the Giants have come very close (1962 and 2002), but have not yet claimed the title. Interestingly the neighborhoods surrounding Fenway Park and AT&T, Mission Bay, have experienced some similarities in their recent developments.

In Boston, what were once abandoned factories and warehouses are now quant neighborhood bars and restaurants where you can watch the game while paying five dollars less for a beer than you would at the park. What were dilapidated apartments and unused buildings are newly renovated luxury condominiums, Boston University-owned apartments, and a shopping center. Ten years ago, neighborhood residents, led by the Fenway Community Development Corporation, launched a planning process that produced a design for an ”urban village” along Boylston Street, right in the heart of the Fenway neighborhood.

The Urban Village was a ”smart growth” plan before that term was commonly used, which meant that it called for development of six- to nine-story buildings with stores at street level and mixed-income housing above. The “urban village” plan has not yet been implemented, but redevelopment of the Fens neighborhood has resulted in recent upscale real estate investment. In turn, the Fenway fan base has lost some of its characteristic working class aura. Tickets at Fenway that were five dollars in 1999 now cost 45 dollars. Instead of construction workers, elementary school teachers, and college kids, the new Red Sox “fans” are lawyers, investment bankers, and CEO’s; season ticket holders who pay more for seats than most Americans make in four years. The development of the Fenway neighborhood has resulted in demographic changes in the fans that visit the ballpark.

The Boston Red Sox organization and the city helped fund the construction of the successful Boston Arts Academy High School at Fenway, which is adjacent to the ballpark on Ipswich Street. The Arts Academy, a pilot high school within the public school system founded in 1998, is the crowning achievement of the Fenway revamping project, which has drawn many talented musicians and artists from different backgrounds throughout the city. Unfortunately, most students from the Arts Academy commute, and few live in the Fenway neighborhood.

A budding real estate market resulting from redevelopment, usually geared toward millionaire buyers, seems to be a common thread of neighborhoods around restored and newly constructed ballparks. The Mission Bay area near AT&T Park, formerly SBC and Pac Bell Stadiums, which was built in 2000, shares many similarities with the Fenway area. Factories and Warehouses have given way to chic luxury condos and high rise apartments. In addition, neither Mission Bay nor Fenway were residential prior to their redevelopments. Parking, which is scarce around Fenway, is also non-existent near AT&T. Like at Fenway, Giant fans have seen higher ticket prices since the construction of the stadium.

While the Fenway neighborhood’s development has resulted in attracting more tourism within the bounds of the ballpark (near Lansdowne Street and Yawkey Way), Mission Bay is both residential and an upscale shopping area. Fenway Park is a historical area with an old-time ballpark feel, which accounts for a large part of its tourism, similar to Wrigley Field. Unlike the Mission Bay, developers recognized Fenway’s potential to develop for the wealthy as redevelopment projects in the city were dwindling. On the other hand, the construction of AT&T located in a beautiful setting on the Bay followed the Mission Bay redevelopment of the mid 1990’s. Development of a neighborhood where there is a baseball park is therefore not contingent on or does not necessarily precede building of the ballpark. However, construction of new parks or their upgrading (in the case of Fenway) seems to drive real estate prices high in those areas.

We’ve seen what happens when a city or neighborhood is determined to make itself presentable to those who will pay big bucks for sporting events. To “clean up” for the 2006 Super Bowl, the city of Detroit spent hundreds of thousands of dollars on moving its large homeless population to shelters outside of the downtown area, while planting fake grass around the stadium, giving the impression of a thriving city devoid of problems associated with GMC and Ford’s ongoing layoffs. As ticket prices to professional sporting events climb, it will be interesting to see how demographic changes in neighborhoods near the park affect team’s overall fan base.

In my estimation, one aspect of what makes professional sports beautiful is its ability to attract a diverse group of fans from all over the world who can identify with each other and unify with regard to their support for a group of athletes. It would be a shame to lose this diversity to redevelopment in urban environments, typically areas with the most passionate baseball fans, where some may eventually not be able afford tickets to see their teams play.