A Political Strategy to Get Rid of Two-Thirds 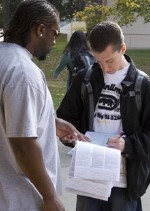 Once again, California has passed an awful budget – with more cuts to social programs, and more reckless borrowing and accounting tricks that will only compound our debt and make next year’s crisis worse. Democrats successfully stopped offshore oil drilling and raiding local gas tax money – but in comparison with the overall budget, it was a minor change. And it also means that Arnold can now take out his butcher knife, and make even more cuts to compensate for the lost revenue. All because reasonable tax increases are never on the table – since Republicans (who are only 37% of the state legislature) refuse to even discuss them, because they’ve all signed a pledge to never raise taxes whatsoever. Every year, Sacramento Democrats complain about the two-thirds requirement to pass a budget – and every year they say we must amend the state Constitution and bring back majority rule. But I never hear the conversation get past the State Capitol, nor do I see the same legislators who complain about it engage the grassroots – or build a winning statewide coalition to make it happen. The effort in March 2004 to scrap two-thirds failed miserably, because nobody bothered to run that kind of campaign. This time, we can’t afford to lose.

A Grassroots Campaign to Put it on the Ballot

There are only two ways to get a constitutional amendment on the ballot. The first is to get a two-thirds vote of the state legislature, which – for obvious reasons – is not going to happen here. Which means our only option is collecting 700,000 valid signatures (i.e., 8% of the electorate from the last gubernatorial election) for it to qualify. That’s a lot more time-consuming, but it’s an opportunity to engage the grassroots – and make the campaign a lot more than just Sacramento politicians making it easier to pass a budget.

Did you know that in the past five months, there have been two initiatives in circulation to repeal the two-thirds vote requirement? One of them applied to the budget only, while the other included taxes as well. The election law firm representing Democrats in Sacramento drafted both initiatives. Did anyone ever stop you in front of Safeway, and ask you to sign their petition? Did your union, church, Democratic club or other civic group you belong to have petition forms available for its members to help gather signatures?

It’s a moot point anyway, because the deadline for collecting signatures passed last week. It’s true many had concerns about these initiatives – which only reduced the threshold to 55%, rather than a simple majority. Some argued that this strategy – although more pragmatic – made it more complicated, and difficult to explain to voters. There’s also an ongoing debate about whether to go for taxes as well, or to take the politically safer route of only getting rid of two-thirds for a budget. With little fanfare, the two measures died a quiet death.

But the point is not how best to get rid of the two-thirds rule. That’s a debate progressives could have for years, while every year the state passes a worse budget that makes even more awful cuts. It reminds me of the debate marriage equality advocates are having about whether to repeal Proposition 8 in 2010 or 2012. An active petition drive could have at least helped lay the groundwork for the grassroots campaign we need to win – once some form of eliminating the two-thirds rule gets on the ballot. Get volunteers used to talking to their neighbors about the issue, and we’ll be in better shape.

Everyone knows collecting 700,000 signatures cannot be done with volunteers alone. That’s why we have a cottage industry in California of “signature gathering firms” that get paid big bucks to get enough petitions signed in the five-month window period. But there’s nothing to stop any campaign from supplementing that effort by recruiting some unpaid signature gatherers who can feel like they are part of a bigger cause. If we want any prayer of repealing the two-thirds, it can’t be a game of Sacramento insiders.

Cutting Through the Apathy of State Government

Voters don’t know about what goes on in Sacramento. They hear about what goes on in local government – due to its proximity – and it’s easy to learn what happens nationally. But following what happens in the State Capitol? Forget it. Focus groups show a lot of Californians don’t even know Democrats have a majority in the state legislature. If a campaign to repeal two-thirds only talks about Sacramento, voters won’t be able to relate.

The only times I’ve seen voters engaged on a statewide proposition have been: (a) an issue like Proposition 8, which doesn’t require voters to understand complicated policy, or (b) the propositions center on a large political figure. Did the 2005 special election initiatives go down because they were bad public policy? No, they lost because Arnold said he would kick nurses’ butts – which made the propositions out as a power grab by an arrogant jerk.

If we’re going to convince a majority of voters to end the two-thirds vote requirement, the question cannot be about what happens in Sacramento. It must connect to the real effects of the budget crisis. Students and faculty at the UC and CSU campuses have to be recruited in the fight to talk about its effect on higher education. Teachers need to talk about the plight of public schools, and doctors about the real world effects of closing health clinics. Environmental groups must be recruited to talk about how California does not make oil companies pay their fair share – when even Alaska has an oil severance tax.

The California Teachers’ Association wasted millions of dollars trying to pass the May 19th special election measures – a “safe” inside-Sacramento strategy that failed miserably once the voters were asked to have a say. Now is their chance to focus on the big picture.

No more ads that show “food fights” in the legislature. Voters don’t care about that.

When voters don’t understand a proposition, their instinct is to vote “no.” That’s why it’s easier to run a “no” campaign. If the measure is a complicated policy matter, just throw enough money behind a campaign that says the measure has “hidden consequences.” Voters will reject it, because they’ll be confused. That’s why if a measure isn’t ahead before the campaign starts in earnest, it will fail – and I’m afraid this may happen here. If we spend too much time trying to explain the measure, the opposition will be busy confusing voters.

But we can learn a lesson from – ironically – the anti-gay forces who passed Proposition 8 last year. What was so unique about that campaign is that the “no” side spent their time trying to explain the measure (and talk about the issue), while the “yes” side spent its time confusing voters about “unintended consequences” and “secret agendas.” Although it was the “yes” side that attempted to overturn the status quo by repealing gay marriage, they prevailed by acting more like the traditional opposition of an initiative campaign.

That’s why the campaign to repeal two-thirds has to be about the status quo, and whether California can afford to continue its budgets the way it’s been done. Talk about public health clinics shutting down, more teachers getting laid off, and more unemployed people. We must get the voters to ask themselves – can we afford not to change?