A Piano Comes to the Tenderloin 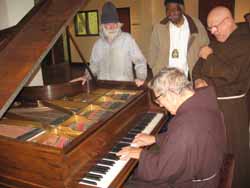 Yesterday, the historic Cadillac Hotel on Eddy Street received an unusual gift – an 1884 Steinway Concert Grand Piano, beautifully restored to its original condition and transported across the country in a pick-up truck. With a market value of $125,000, the piano was donated to the Hotel by Lee Walkup in honor of his late sister, community activist Patricia Walkup. When she first moved to San Francisco, Patricia volunteered at the Cadillac Hotel under the expert guidance of Leroy Looper – the Father of the Tenderoin – and went on to lead the successful campaign to replace the Central Freeway with Octavia Boulevard. An avid pianist who believed that ordinary people can accomplish extraordinary things, honoring the Piano after Patricia Walkup is a fitting tribute to Leroy and Kathy Looper, the residents of the Cadillac Hotel, and the effort to make the Tenderloin a historic district.

How the piano made it to the Tenderloin, as well as its own history, is a fascinating story. At ten feet in length, the piano was first owned by paper baron Edward C. Taft, who bought it for his daughter. Taft had it shipped by water from the factory in Queens, New York, and then had it transported by wagon and brought up a steep hill to his Kenilworth Castle in Holyoke, Massachusetts – modeled after Gladstone Castle in England. The piano stayed there until 1958, and for eight years in the 1990’s was completely restored to its original condition. In April 2007, Lee Walkup bought the piano, and it began its 3,000-mile journey to the Cadillac Hotel in San Francisco.

The Cadillac Hotel was the first non-profit SRO west of the Mississippi River, the first supportive housing on the West Coast, the first SRO rebuilt after the 1906 San Francisco earthquake, and a historic City landmark. Purchased by Leroy and Kathy Looper in the 1970’s, it provides affordable housing to 160 formerly homeless individuals in the heart of the Tenderloin. The Cadillac’s lobby, where the grand piano is now situated, was leased for many years to Newman’s Gym – a legendary training facility for boxers where former District Attorney Terrence Hallinan would regularly come to box.

As someone who has played the piano for over 20 years, I just had to find out what a $125,000 piano looks and sounds like. If you’re not familiar with pianos, let me offer a little perspective. I own an un-restored 1928 Baldwin baby grand that I paid market value for $4,000, and it’s my prize possession. I went over to the Cadillac Hotel yesterday as the ten-foot splendor arrived in a Ryder truck, and entered the hotel lobby.

The Steinway is not just a piano with a magnificent and powerful sound – it’s also a work of art. The piano’s case is crafted of pure Indian rosewood, and has an original old growth spruce soundboard. After a team of piano movers brought it into the lobby and painstakingly re-installed the legs, Lee Walkup – the generous donor who brought it from the East Coast – gave it a test run. “Not bad after having traveled 3,000 miles,” he said.

I then had the privilege to sit down and give it a try. After playing a little Chopin, some Scott Joplin, and excerpts from “Rhapsody in Blue,” I can attest that the piano has a firm sound with every hammer emitting a powerful, perfectly rounded tint. Unfortunately, they had yet to install the pedals when I played, so my legato version of “Clair de Lune” was not successful. But rest assured that when the whole instrument is set up, and properly tucked in the corner of the Cadillac Hotel, Claude Debussy will be proud.

Father Efrem, a Franciscan monk from St. Boniface, then sat down and played “Danny Boy” and a couple Italian operatic tunes. Onlookers began to sing along. Hotel residents came out of their rooms, sat down on the lobby steps and gathered around to listen to the splendor. In the 60’s, the Cadillac was owned by Don Fisher, who removed some of the hotel’s architectural details and let the tenants live in slum conditions. Today, the hotel is a model for supportive housing, promotes the history of the neighborhood, and features a grand piano in its lobby that sounds as good as it did 123 years ago.

On September 19th, the Cadillac Hotel will celebrate its 100th Anniversary with a party from 5:00 p.m. to 7:00 p.m. In November, neighborhood advocates hope to have the Tenderloin declared a historic district – due to the area’s rich legacy of turn-of-the-century SRO’s, and the home of the City’s historic underground gay scene. Plans for a history museum of the neighborhood to educate residents and visitors are in the works, and it will likewise be located in the Cadillac.

And now the Cadillac Hotel has an 1884 Steinway Concert Grand Piano, donated to commemorate Patricia Walkup – one of many community activists who was mentored and supported by Leroy and Kathy Looper.