A New Dawn for Labor Day 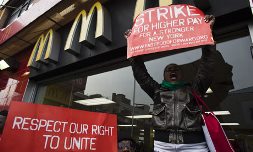 If you happen to be in the Bay Area today, chances are that you’ll pass a fast food chain with striking workers picketing outside. They’re part of a national day of action in more than 50 cities across the country, targeting chains like McDonald’s and Burger King and culminating a year of unprecedented labor actions that started last November and have been growing since.

But at a time when Labor Day has devolved into picnics and parades, the bright red strike signs may be jarring. So what’s going on here?

Most immediately, this is a story of workers in one of the lowest-wage (and fastest growing) sectors of our economy taking significant risks to try to improve their workplace conditions. They are calling for an industry wage of $15 an hour and the right to form a union without intimidation. And their case is compelling.

In 2012, the median hourly wage for fast food workers was $8.78 an hour, which is already very low pay. But this is also a part-time industry where the typical work week is only 24 hours, translating into an annual salary of about $11,300 a year. That’s below the federal poverty line for a single person, never mind workers who have children or are supporting elderly parents. Moreover, promised wages don’t always materialize. In a recent survey of fast food workers in New York City, fully 84 percent reported that they had experienced wage theft, like being forced to work off the clock without pay and not getting overtime pay.

This low-wage, no-benefits business model is a recipe for working poverty. The majority (70%) of fast food workers are adults, with a median age of 28. More than a quarter are raising children, and a third have some college education or a college degree. Unfortunately, many will remain stuck in these jobs, because when it comes to opportunities for upward mobility, the fast food industry is extraordinarily flat. Only 2.2 percent of its jobs are managerial, professional or technical, meaning there aren’t nearly enough good jobs for front-line workers to move up into. Opportunities to become a franchise owner are even more limited, and very costly. McDonald’s, for example, requires $750,000 in assets of franchisee applicants.

Given these dismal working conditions, it’s no surprise that fast food workers are striking. They’re acting against a backdrop of 30 years of growing inequality, marked by a yawning gap between rising productivity and corporate profits on the one hand, and stagnating wages on the other. The Great Recession has only exacerbated the trend. For example, over the last five years McDonald’s saw its profits grow 27 percent while paying its CEO $13.8 million last year – but continues to start employees at or near the minimum wage.

Today’s striking workers are arguing that there’s enough money to raise their wages, and companies that pay above the industry average – like Costco, Trader Joe’s and In-N-Out Burger – suggest they’re right. The deceptively simple act of walking off the job is, in fact, a highly visible challenge to the unfair distribution of profits in our economy.

But these strikes are also significant for another reason. After decades of plummeting union membership and the virtual disappearance of strikes, a new generation of worker organizing is emerging – including car wash workers, home health aides, domestic workers, dishwashers and waiters, retail sales persons, day laborers and warehouse workers. They signal a growing hunger for representation and voice on the job.

It is hard to imagine a path out of America’s extreme inequality without workers having the right to collectively advocate for higher pay and better working conditions. By striking today, thousands of workers are breathing new life into the meaning of Labor Day.

Annette Bernhardt, PhD, is a visiting professor of sociology at UC Berkeley, as well as a visiting researcher at Berkeley’s Institute for Research on Labor and Employment.