A Movement Without a Candidate 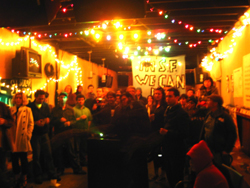 With his re-election just months away, Mayor Gavin Newsom has no credible opponent in sight – and his approval ratings remain high. But many are dissatisfied with a Mayor who governs by press release – with the city’s climbing homicide rate, scarce affordable housing, and inadequate Muni service. And if last night’s “Gavin Watch” party at El Rio was any sign, there’s a lot of energy among frustrated activists to meet and talk about the issues. On short notice, a large crowd gathered to celebrate a movement without a candidate – launched and encouraged by a website whose identity remains secret.

The League of Young Voters – a dynamic new organization in town that engages young people in politics – co-hosted the party with the “Gavin Watch” website last night at the Mission District bar. Guests took their pictures with a cut-out of Gavin, learned about what parts of the world the Mayor has traveled (while he’s not paying attention to City issues), and frolicked with the chickens who dogged his various Town Hall “meetings” as he avoids Question Time.

“We’re here to engage young people in thinking more critically about Gavin Newsom’s term in office,” said Natasha Marsh of the League of Young Voters. “We want people to look beyond the Mayor’s personal escapades and talk about issues that affect people in a substantive way. And we’re having fun while doing it.” But still, she wouldn’t tell me who’s behind the Gavin Watch website.

The party’s décor had plenty of substantive content about issues affecting the City – and where the Mayor falls short. A wall-chart showed the rising homicide rate since Gavin took office. And through various signs and gimmicks, there was plenty of information on how the “green” Mayor pays lip service to the environment – while doing more to help big business improve their “green” image.

According to one display, Newsom has (a) formed a business council on climate change with no goals in reducing carbon emissions, and (b) helped PG&E launch a “green” campaign while efforts to get community-choice aggregation have floundered at City Hall. A new website has also been created exclusively to expose PG&E’s “Let’s Green this City” campaign – and how it doesn’t live up to the hype that it pretends.

There were no elected officials present at the party – except for David Campos, the Democratic County Central Committee member who is planning to run for Supervisor in District 9. In fact, there were none of the “usual suspects” of potential challengers to Newsom whose names have been circulated – such as Matt Gonzalez or Ross Mirkarimi. But there was plenty of talk at the party about who would run – although the focus was more on articulating an issue-based agenda.

As I’ve mentioned before, it’s unlikely that a candidate like Gonzalez would beat Newsom in November – but that’s a separate question from whether a candidate like that should run. And the crowd last night wanted to see a spirited debate in the upcoming months over the direction of the City that would hold the Mayor accountable. Even if Newsom eventually gets re-elected, one sentiment at the party was that they didn’t want to see a “coronation” – much like why Gonzalez first challenged Newsom four years ago.

It’s almost April, and it will be difficult for any candidate to jump into the fray and build a winning coalition in November. At this point in 2003, Tom Ammiano, Angela Alioto and Gavin Newsom had already held a kick-off rally for their campaigns and were busy raising money and hiring staff. Of course, Gonzalez didn’t enter the race until August.

But last night’s party was not about recruiting a candidate – nor was it about strategizing who would take on Newsom. It was about raising issues in the Mayor’s race and spreading the word in our community – that Gavin Newsom will be “watched” at every moment in the next several months, regardless of the final outcome. If there was any “campaign kick-off” last night, it was for a campaign that has no candidate – and a movement that has no leader.

And having several dozen people gather on a Thursday night showed the frustration – and hope – that activists who cut their teeth on campaigns for Tom Ammiano, Matt Gonzalez, Ross Mirkarimi and Chris Daly still have. They are young twenty-somethings who still make up the activist base of a City that thrives on that type of culture – and they’re not going anywhere.

The only test for them now is – can they build a base outside of the Mission?