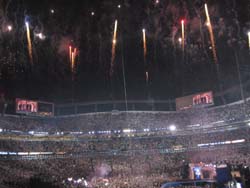 Last night, I got to live history. Being at Denver’s INVESCO Field when Barack Obama accepted the Democratic nomination in front of 84,000 was a moment that will transcend this election. Since at least 1968, progressives have struggled with the inherent conflict between electoral politics and social change. Many of us worked in movement politics that either protested elected politicians – or waged electoral campaigns that failed at the ballot box. Others have opted to elect compromised candidates because we might still get incremental change. But Obama now gives us an opportunity to elect a “movement candidate” to the most powerful position in the world – ushering in another New Deal or Great Society that will transform our national priorities. Never before have we seen such a marriage of a mass movement for social change with something so mainstream and establishment as a Democratic National Convention. For the first time in my life, I felt really good about being with the “winners.”

Movement campaigns – where a candidate inspires progressives to a higher calling and purpose – hardly ever win. I wasn’t born yet in 1968 when RFK was assassinated, but I’ve always felt that our country has been going to hell ever since. George McGovern lost every state except Massachusetts, and Jesse Jackson also didn’t win. I worked for Paul Wellstone when he considered running for President – only to have him not run, and to then die tragically in a plane accident. Howard Dean mobilized progressives to shake up the Democratic Party, only to have his presidential campaign crash and burn in Iowa. Ned Lamont bravely took on Joe Lieberman because of the Iraq War, but lost that election.

For a “movement candidate” to become the Democratic nominee for President – and who is likely to win in November – is truly an historic occasion we haven’t seen in decades. The Obama campaign understands that this change won’t come easy, and is only possible with active support from the grassroots that made his campaign a reality – bringing it as far as it has gone. Last night, the 84,000 people at INVESCO Field were urged to sign up to volunteer by text message; within a few hours, a whopping 34,000 had done so.

“Today, the Democratic Party competes in all 50 states,” said DNC Chairman Howard Dean earlier last night. “Today, the party knows that power comes from the grassroots. Barack Obama and Joe Biden know that it’s not just about turning red states blue. It’s about turning our country around.” Congressman John Lewis spoke about the civil rights movement of the 1960’s – and that “today we are here because we still have a dream.”

Al Gore failed to excite the party’s progressive base in 2000, but was in fine form last night to tell us how much was at stake. The election is close, he said, because “the forces of the status quo are desperately afraid of the change Barack Obama represents.” But he noted that young people are drawn to Obama in unprecedented numbers because of his message of change. “We have a mandate from history to launch a new beginning.”

We were entertained with live performances by Stevie Wonder, Sheryl Crow and will.i.am – who played the famous YouTube hit “Yes We Can” as the crowd roared with approval. Sheryl Crow captured the moment when she yelled out “doesn’t this make you hopeful?”

A gifted orator, everyone expected Obama to bring the house down – and expectations last night were extremely high. Obama accomplished three things last night that made his speech phenomenal: he (a) forcefully went after John McCain’s negative attacks in a way he had not done before, (b) laid out the specifics of his proposals – adding real substance to his message of hope, and (c) called out for a new type of politics that rejects the petty “slash-and-burn” tactics that have only bred fear and cynicism.

It’s the third point that will probably have the most salience in the general election.

Back in March, Obama gave an historic speech on race when he was under fire for his affiliation with Rev. Jeremiah Wright. At the time, Obama said we could go through these same predictable fights year after year – or we can rise up and agree not to let racial demagoguery bring us down again.

Last night, Obama had the same message for attacks on his patriotism. “I look forward to debating [policies] with John McCain,” he said. “But what I will not do is suggest that the Senator takes his positions for political purposes. Because one of the things that we have to change in our politics is the idea that people cannot disagree without challenging each other’s character and patriotism. The times are too serious, and the stakes are too high for this same partisan playbook. So let us agree that patriotism has no party.”

It was Obama at his best. Another “not-this-time” moment that seeks to break from the Swift Boat attacks of our past elections. And it gave the crowd another sense that this was an historic election, and that we were at a “defining moment in our history.”

The election now takes on a new phase, as Democrats leave Denver today and return to their communities – as they help to make Barack Obama our next President. It will be a tough fight that the forces of the status quo will do everything to undermine. I only wish more than 84,000 people could have been at INVESCO Field last night – to really get a sense of how historic this “movement candidacy” has become.