A Great Day for Activism – and for America 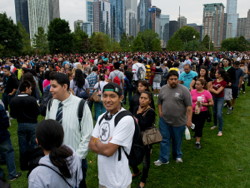 For the estimated 1.2 million young undocumented immigrants who began signing up for President Obama’s “Deferred Action for Childhood Arrivals” legalization program, August 15, 2012 will forever signify the power of grassroots activism. Those eligible under the program will be able to legally work and live in the United States but will not gain permanent legalization status or a path to citizenship. Obama implemented his “most ambitious immigration initiative” in response to both growing Latino political power and the courageous and inspiring grassroots pressure from young DREAM ACTivists. It is these young people, not the fake, billionaire-backed Tea Party Republicans, who represent the true power of grassroots activism to create meaningful change.

When we look at the progressive movements that have made real gains since President Obama’s election in 2008, only two stand out: marriage equality and immigrant rights. Both have a way to go, and the lack of comprehensive immigration reform coupled with increased deportations has left many disappointed with progress in this area.

But the ability of DREAM ACTivists to win tangible gains for over one million young immigrants remains an historic achievement. And they accomplished this almost entirely with the type of true grassroots activism that many previously doubted could still make a difference.

The securing of many of the key benefits of the DREAM Act has significant short and longterm political impacts.

Latino voter enthusiasm for President Obama skyrocketed after he announced the new program, and will rise further as implementation has now begun. The young beneficiaries cannot vote, but their friends and family who are citizens can. These voters understand that the continued ability of young undocumented immigrants to legally work and live without threat of deportation depends on Obama’s re-election.

DREAM ACTivists also understand this, and it would not be surprising to see many of them volunteering to help re-elect Obama. Given their track record of hard work and dedication, they could prove a major asset in mobilizing Latino voter turnout in key states.

The Latino vote will prevent a Republican victory in 2016, and by 2020, increased Latino voting will make Texas a swing if not a blue state. Once Texas joins California as solidly Democratic in presidential races, Republicans have no chance of regaining the presidency.

Changing this future requires Republicans to return to their pre-2008 position of supporting some version of immigration reform that includes a path to legalization and citizenship for all of the $8-12 million affected. The GOP will still lose Latinos for other policy reasons, but they will not lose this constituency in droves as occurred in 2008 and will happen again this November.

Can Republicans risk alienating their anti-immigrant base? They have no choice. And neither Wall Street nor the billionaire funders of the GOP care about this issue.

By DREAM ACTivists forcing Obama to do the right thing, the Latino electoral base can use this November to create a new path toward comprehensive immigration reform. And when studies show the positive economic impacts of the young people benefiting from the new immigration policy, it will be even harder for some Republicans to remain opposed.

Unlikely as it seemed only one year ago, the grassroots campaign for the DREAM Act could change the political calculus for enacting comprehensive reform before 2016. Immigrant rights activists who had their expectations dashed after the 2008 elections may have a positive surprise coming after November 2012.