A Firefighter Election: Can Veteran of Wisconsin Uprising Rescue the IAFF? 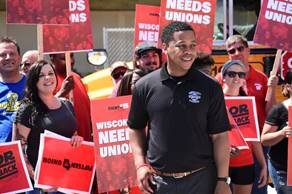 A rare contested race for president of the International Association of Fire Fighters (IAFF) has given its members a clear choice between a union traditionalist from Boston and a progressive activist who backed massive labor protests against Wisconsin Governor Scott Walker a decade ago—and then joined electoral efforts to oust the anti-union Republican.

In mail balloting already underway, 3,400 local union delegates are casting votes on behalf of 320,000 IAFF members throughout the U.S. and Canada. They are choosing a replacement for 75-year old Harold Schaitberger, a full-time union official for more than four decades and a longtime mover-and-shaker in national Democratic Party circles, who announced his retirement last fall. Vying to succeed him are IAFF Secretary-Treasurer Edward Kelly, a 47- year old Air Force veteran and former leader of the union’s Massachusetts branch, and Mahlon Mitchell, a 43- year old African-American from Madison, who heads the Professional Fire Fighters of Wisconsin

Both are energetic, ambitious, and young—by US labor leader standards. But Kelly more strongly reflects the insular “old school” culture of this public sector craft union, while Mitchell, a 2016 Democratic National Convention delegate for Bernie Sanders, has favored Fire Fighter alliances with other public workers facing budget cuts or loss of their workplace rights. Advocating the latter approach put Mitchell in the national spotlight for the first time ten years ago this month. That’s when Walker, Wisconsin’s right-wing governor and the Republican dominated state legislature were pushing Act 10, a law designed to weaken public sector unions—other than those representing police and fire-fighters. Under the strong local leadership of Madison Firefighter president Joe Conway, and with Mitchell newly installed as the union’s statewide leader, the IAFF refused to be part of Walker’s divide-and-conquer strategy.

Instead, Fire Fighters united with other public workers, who were not granted any Act 10 exemption. At rallies and marches involving up to 100,100 people, the charismatic Mitchell was a frequent speaker, attired, as always in his dress uniform. “I saw first-hand his ability to bring people together and make us stronger,” says Justin Pluess, a white fire fighter from Wisconsin Rapids, a small paper mill town in the middle of the state. “His willingness to take on one of the worst union-busting governors ever helped rekindle the labor movement in Wisconsin. He made union members proud to be union again.”

When Act 10 was passed in March, 2011, despite weeks of protests and a peaceful occupation of the state Capitol building, Conway was among the trade union militants calling for a general strike, industrial action which Mitchell did not favor.  But Mitchell soon became part of the Wisconsin Democratic Party’s attempt to recall Walker and his Republican Lieutenant Governor Rebecca Kleefisch. In that 2012 recall vote, the governor defeated Milwaukee mayor Tom Barrett by a 53 to 46 percent margin. Running for Lieutenant Governor against Kleefisch, Mitchell received more than 1,150,000 votes and lost by a closer margin than Barrett. Six years later, the Fire Fighter leader finished second in a crowded field of Democrats competing for the chance to oust Walker in the state’s 2018 general election. The primary winner, current Wisconsin Governor Tony Evers, ended up driving the architect of Act 10 from office by less than 30,000 votes out of 2. 5 million cast.

A Class Speaker at Harvard

Ed Kelly’s campaign website identifies him as the proud son, grandson, brother, nephew and cousin of fire fighters. In 1997, he joined the Boston Fire Department, which has been described as the city’s “whitest public safety agency,” despite its now majority minority population. Four years later, Kelly was among the hundreds of out-of-town fire-fighters dispatched to the World Trade Center site in Manhattan after the 9/11 attacks. Kelly was also a first responder to the Boston Marathon bombing in 2013. He was elected president of the IAFF’s Boston local, then its 12,000-member state federation, on whose behalf he did legislative lobbying. In 2015, his union sent “Edzo,” as he’s known, to the prestigious Harvard Trade Union Program, where fellow students chose him to be their class speaker.

Kelly’s dedication to fellow veterans has led, however, to controversial political endorsements and hiring decisions. Last year, in the Bay State, he helped arrange Fire Fighter backing for a former police officer and two-time Trump supporter running for state rep on Cape Cod. West Barnstable, Mass. Republican Steven Xiarhos, who lost a son in Afghanistan, defeated James Dever, a labor-backed Democrat who works for NAGE/SEIU, one the state’s biggest public employee unions. A Massachusetts labor leader calls that IAFF intervention “a disaster” and describes Kelly as someone who has “gotten a break-and-a-half just to end up where he is now in the union.” After his election as IAFF Secretary-Treasurer in 2016, Kelly hired former Green Beret major Matt Golsteyn, who served with his brother in Afghanistan. A month later, Golsteyn admitted to committing a war crime during a Fox News interview and was charged with murder by the Army. This made him a conservative cause celebre and candidate for White House clemency. In late 2019, Trump pardoned Golsteyn, who then joined the president onstage at a Florida fundraiser that generated $3.5 million for Republican re-election efforts. This was eight months after the IAFF, under Schaitberger’s leadership, had made an early endorsement of Joe Biden’s candidacy. Golsteyn remains at his $236,000 a year union headquarters post as Kelly’s chief of operations.

Kelly’s relationship with Schaitberger worsened last year due to his own covert maneuvering to replace the IAFF president when his term of office ended this winter. Conservative news outlets like The Free Beacon and Wall Street Journal ran embarrassing articles about Schaitberger’s pension benefits and handling of union funds, based on records obtained from Kelly’s office.  In an interview with the Intercept, Brian Rice, president of the California Professional Firefighters, described these leaks as a “a veiled coup, a power struggle, aimed at the IAFF leadership,” which threatened to tarnish its organizational reputation. To Kelly critics, like Bryan Jeffries, head of the Professional Fire Fighters of Arizona, they also seemed to be the work of “some very right-leaning elements within our union.”  Instead of running for re-election, Schaitberger decided to retire, leaving the field open for a contested race for the union’s top job, which pays $371,000 a year, five or six times more than the average fire-fighter earns.

Because of the pandemic, the IAFF held a virtual convention in January, which enabled many more of the union’s small locals to participate. About 70% of all IAFF affiliates have fewer than 50 members, but the union’s internal politics tend to be dominated by its bigger city locals. The 3,400 delegates now casting weighted ballots, based on their local’s membership size, have been wooed on-line and in person by both the Kelly and Mitchell campaigns. Neither candidate has been endorsed by a majority of IAFF locals. Kelly has his strongest support in his native northeast, although after union officials in Philadelphia endorsed him without sufficient rank-and-file in-put, angry members forced a re-vote which revealed nearly equal support for the two candidates. In northern California, Mitchell is backed by the 30,000-member state Fire Fighters organization, plus San Francisco Local 798, Oakland Local 55, and other IAFF affiliates in Berkeley, Hayward, Milpitas, San Jose, and Sacramento.

Both candidates have campaign websites showcasing their latest endorsement videos. But Mitchell has twice as many Facebook followers as Kelly, and he posts links to substantive discussions, conducted via Zoom, with rank-and-filers around the country.  Kelly has rejected Mitchell’s repeated demand for a “face-to-face” debate—despite no shortage of issues to discuss. While fire fighters have won good pay and benefits in parts of the country with strong public sector bargaining laws, those working in some “right-to-work” states lag far behind. Many are able to retire early but then lack affordable pre-Medicare age health coverage. As the New York Times reported recently, “the safety of firefighters has become an urgent concern amid the worsening effects of climate change, which bring rising temperatures that prime the nation for increasingly devastating fires.”  Adding to that threat is on-the-job exposure to carcinogenic chemicals in the protective equipment that firefighters have worn for years; in 2019, cancer caused 75 percent of all active duty firefighter deaths. During his campaign, Mitchell has made such occupational hazards and better mental health coverage a major focus. And, his backers believe, he will be a far better strategist in the union’s upcoming fight to protect fire services from a cascade of Covid-19 related state and local budget cuts.

While some Mitchell supporters rate the contest as “neck and neck,” the candidate representing greater diversity and change is competing on tough electoral terrain. The workforce represented by the IAFF is more predominantly white and male than the U.S. military and even local police forces. Fewer than 8 percent of all U.S. fire fighters are African-American and few have risen, like Mitchell, to leadership positions. Even in Canada, where the IAFF has 23,000 members, an increasingly diverse city like Calgary (which has a Muslim mayor) has few women firefighters and its black or indigenous ones have been subjected to years of hazing, harassment, and racial slurs.

Although the IAFF backed Biden last year and Hillary Clinton in 2016, one official from another union who spoke at a Fire Fighters national convention just a few years ago was warned beforehand that his audience was heavily Republican. When Mitchell himself addressed IAFF convention delegates, during his 2018 bid to become Wisconsin’s Democratic gubernatorial nominee, he criticized his home-state for having the highest African-American incarceration rate in the country. It was not a big applause line before a largely white crowd otherwise sympathetic to his political advocacy for the union and its job-related causes.

One IAFF member who’s definitely rooting for Mahlon Mitchell, when the ballots are counted on March 4, is Andrea Hall. She’s the first-ever African-American female fire captain from Fulton County, Georgia, who now serves as president of IAFF Local 3920. On January 20, she impressed millions of U.S. presidential inauguration viewers by reciting the Pledge of Allegiance, while providing her own American Sign Language version while she spoke. Similar dexterity, in addressing multiple audiences, has been a key part of Mitchell’s own past success as a IAFF trail-blazer. It remains to be seen whether it will get him to the top of the union ladder this time around.

(Steve Early was a longtime Boston-based national union representative for the Communications Workers of America. He has written four books about labor and politics, including Save Our Unions (Monthly Review Press) and just co-authored a new book dealing with veterans’ issues. He can be reached at Lsupport@aol.com.)