A Dubious Milestone for Women 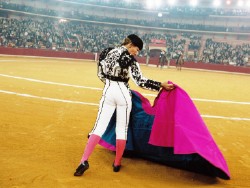 “When Vega stands in front of a bull, covered in blood, sword raised, staring the beast in its eye, it’s impossible not to immerse yourself in the action.” — Sarah Godfrey , Washington City Paper

The quote is referring to Maripaz Vega, who along with Eva Florencia, is featured in a September 1 PBS documentary, “Ella Es El Matador (She is the Matador),” about women in bullfighting, a traditional men’s sport. The show airs on the long-running documentary series Point of View. The women — Vega Spanish and Florencia Italian — are breaking tradition in the world of Spanish bullfighting. Though they are not the first female matadors, these women have had to contend with mucho sexismo and machismo: Condescension from male colleagues, promoters who keep them from the best arenas, and audiences that won’t accept a woman doing what they expect a man to be doing.

A 1908 law in Spain actually prohibited women from being bullfighters.

In the other countries where bullfighting is popular, Portugal among them, women are much more accepted.

Though they face discrimination, Vega and Florencia are not giving up. In fact, Vega has risen to full matador and is about to ascend to the status of top ranks. She has wanted to be a matador since age nine when, inspired by her five brothers who trained to be matadors, she faced her first calf. Her brothers didn’t get past apprentice bullfighters.

At 16, Florencia ran away from her home in Italy to Spain to pursue her dream of fighting bulls after she saw a “picture of a bullfighter executing a beautiful pass.” Now she faces the challenge of getting past the barriers to her 25 sanctioned matches that she needs to become a matador.

“Bullfighting is the quintessential symbol of masculinity and bravery in Spanish culture,” say filmmakers Gemma Cubero and Celeste Carrasco, both from Spain. “Making this documentary about female matadors means changing this symbol and shifting the gender roles that have been defined for centuries.”

Changing the “quintessential symbol of masculinity and bravery in Spanish culture” and “shifting the gender roles” doesn’t address the basic problem with the sport itself: it is cruel and inhumane. Animals are tortured and slaughtered to prove what? That humans can make shedding blood a spectacle for entertainment?

It’s no better than the Roman “sport” of pitting Christians against lions or the American obsession for watching two guys beating the crap out of each other in a boxing ring. Except that the unwilling animal is forced to fend for its life.

Florencia can romanticize it all she wants, by describing bullfighting as “something beyond the cruelty…a connection between man and beast,” but it’s impossible for me to see the “connection” when the ultimate goal is to kill the poor animal.

I’ll pass on this documentary (and this “milestone” for women), thank you.

Tommi Avicolli Mecca is co-editor of Avanti Popolo: Italians Sailing Beyond Columbus, and editor of Smash the Church, Smash the State: The Early Years of Gay Liberation, which has just been nominated for an American Library Association award. His website: www.avicollimecca.com