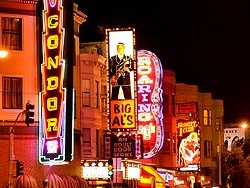 Not everyone is as thrilled about the decision as ICM is.

In a case of strange bedfellows, the move is also opposed by the religious right, but for completely different reasons, of course. Robert Peters, the head of Morality in Media, said that dot-xxx will not protect children from “online exposure to hardcore adult pornography.”

An even stranger bedfellow is Andrew McWhinnie, a counselor who helps so-called sex addicts in Canada. “It’s saying: ‘If you want it, come here,’” he said. “Anything making it more accessible–which I think this does–damages the fabric of our society.”

For my money, I’d designate a special category for the dregs of humanity, and include Sunday morning TV ministers, anyone from the George Bush administration, and obnoxious dot-com billionaires running for California governor.

Certainly Sarah Palin would be a dot-bd for brain dead.