A Cultural History of the New York City Subway 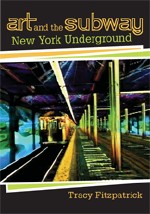 During the recent Bay Bridge closure, there was much talk about how San Francisco Bay Area residents needed to become less car-dependent. Overlooked was the fact that the region’s many transportation systems collectively provide neither the 24-hour coverage nor geographic breadth to enable people to give up cars. In other words, the Bay Area’s public transit system is not in the same league as New York City’s legendary subway system, whose cultural and artistic significance is the subject of Tracy Fitzpatrick’s recent book, Art and the Subway: New York Underground. Fitzpatrick traces the subway from its opening in 1904 to the present, revealing how artists, writers, photographers and other cultural workers took advantage of the subway’s public and democratic milieu to forge their visions of society. She uncovers many surprising facts, such as the long history of subway graffiti, the use of guards to cram people into packed trains, and the ways in which artists captured the racial contradictions among a subway ridership that confounded traditional assumptions about the Melting Pot.

Although the New York City subway has entranced the public for over 100 years, Tracy Fitzpatrick’s book provides many new insights into its cultural and artistic significance. These insights begin with the fact that the system was originally designed under the elaborate City Beautiful architectural style, but soon took on a much different appearance when the far more simpler Arts and Craft style became dominant. I was also very surprised to learn that much of the subway was constructed underground while street traffic continued; the book contains photos showing how this was done.

While Fitzpatrick traces subway art through Keith Haring and the graffiti writers of the 1980’s, I found the subway’s cultural contributions in the 1920’s and 1930’s the most compelling. Reginald Marsh, best known for his paintings of working-class visitors to Coney Island, also created cartoons and paintings for a newspaper series, “Subway Sunbeams.” Fitzpatrick reproduces many of Marsh’s cartoons, which address such issues as the extreme crowding which typified subways in the 1920’s – hence the guards to jam people in – and the often suppressed racial dynamic. In an era when immigrants were said to be “melting” their foreign backgrounds and becoming new Americans, Marsh showed that African-Americans stood out from other riders, not being allowed to “assimilate” into the crowd with fellow riders.

Fitzpatrick also shows the “Topsy Transit” pamphlets handed out by the Women’s City Club of New York (WCCNY) in 1937 as part of the ultimately successful campaign to unify all of the city’s three transit systems. Topsy Transit was a stereotyped black girl based on an Uncle Tom’s Cabin character described as a “pikaninny;” her wild and unkempt hair was put forth as symbolic of an out of control transit system needing unity. The fact that such strongly racist stereotypes would be openly used in New York City at that time is less surprising than their distribution by an organization that was far ahead of its time in advocating for child labor laws, juvenile justice and women’s rights.

These decades also saw painters like Max Weber, Joseph Stella and the Italian Futurist Fortunato Depero transform the subway into a subject of serious art. This would continue through the Federal Art Project of the New Deal, though a dramatic program for a full-scale subway arts program that emerged in 1936 ultimately failed. Part of the reason was opposition to public art from the precursors of today’s right-wing; one New York City Councilman argued that “the only other city with murals in its subway was Moscow,” while another feared that murals “might be used to plant un-American ideals.”

While many only know Yoko Ono as Beatle John Lennon’s wife, she was a key figure in the Fluxus art movement that emerged in the 1960’s and continued in one form or another for decades. Artists associated with Fluxus were the first to engage in performance art in the subway, with Ono holding a thirteen-day event in the Canal Street Station in 1966.

Through such acts as walking through a subway train in flippers, mask and full scuba diving attire, or wearing clothes soaked for a week in vinegar, performance artist pursued their investigations into human behavior. And the fact that the subway was the arena reflects its status as the most public and democratic of spaces in this increasingly privatized age.

While photos of graffiti-dominated subway cars are common, few may be aware that as far back as the 1930’s there was talk about the “subway Rembrandts” who “paint mustaches on the girls on advertising posters.” Such doctoring of ads was so pervasive that by 1961 the authorities placed posters of blank human heads with instructions to the public, “Please, if you mark something – use these.”

Fitzpatrick does not question that much of the graffiti that often filled every space on the outside of a subway car is art, but she does show how by defacing subway maps, some of these writers undermined public safety and the system’s operation. The ability of writers to deface subways coincided with other increasing system problems in the 1970’s and 1980’s, and it was really not until 1990 that graffiti was eliminated and the subway system became safer and more reliable.

As might be expected from a book with “art” in its title, Fitzpatrick offers readers an extraordinary collection of illustrations to support her text. Many, like the Marsh cartoons, are rarely seen. The book’s visuals more than compensate for its unusual structure, with there being often little connection between chapters. Fitzpatrick chose to proceed thematically rather than chronologically, which left me wondering, for example, why Yiddish plays of the 1920’s set in the subway, or King Vidor’s 1928 film The Crowd were discussed in the book’s next to last chapter. The book’s origins as a dissertation likely explains its discussion of some obscure artists whose minimal contributions to subway culture could have been bypassed.

This is a book for people who love the subway and want to learn more about its cultural legacy. Fitzpatrick has retrieved long missing components of the subway’s historic role, offering even longtime riders a new perspective on their means of getting around.

Randy Shaw favors the Q train and is the author of Beyond the Fields: Cesar Chavez, the UFW and the Struggle for Justice in the 21st Century.