A City Without Roots 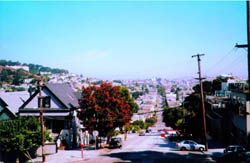 Last week’s survey by the controller revealed an important fact – over one-third of San Franciscans have plans to move in the next three years. This represents a massive segment of our city’s population, and one that likely exists due to the high cost of living, particularly of housing. One consequence of this statistic deserves to be highlighted – a lack of roots can often be tied to a lack of civic engagement, leaving the city’s future in the hands of those who can afford to stay.

Permanent residents are far more interested in their city’s future, and thus its politics. You’re only going to be concerned about the number of trees on your street if you’re going to walk that street thousands of times over the course of your life, for example.

When I moved to this city, I harbored a constant urge to get involved in local politics. Yet I often chose not to, figuring that I’d likely be leaving soon anyway, so what was the point. My constant uncertainty about how long I’d last here, due largely to the fact that I struggled to make rent every month, led to my isolation from public life.

It wasn’t until I decided I would spend a significant chunk of my life here that I began to get active. I think many other San Franciscans of my age and/or my economic status feel the same way – who cares who the mayor is for the next four years, for example, when you’re not sure if you’ll stay another year.

Local political efforts are often far more successful when they develop within a deep-rooted community as well. The network of relationships and trust in such communities creates organized groups of people that can be quickly mobilized around an area of mutual interest. When people are constantly moving in and out of a neighborhood, an area of disconnected individuals exists rather than a potential political force.

The most devastating impact of this trend involves those most in need of a voice in city government lacking one. As the rich who can afford to stay here begin to dominate community groups, advisory boards, and non-profit boards of directors, their limited vision of our city gets closer and closer to reality.

City government has the ability to, through its policies, create a place where its residents feel more rooted and sure of their ability to stay there. Building more affordable housing, protecting tenants, and keeping the cost of services such as health care and public transportation as low as possible will foster a stronger sense of stability among citizens.

As a representative of the people, government should make ensuring residents feel safe and secure a top priority. Instead, as Randy Shaw details in his article today, it seems our city officials are focused instead on making businesses feel more at home here than residents.

These business owners make the argument that if you ask too much of them, they will leave for somewhere else. Yet the same argument, though far more powerfully made, is already being forwarded by our city’s young and poor. By leaving, they are telling government that if it continues to get harder to live here, they we will go elsewhere. This exodus will create a vast void of artists, non-profit workers, and menial laborers.

The push for more affordable housing and lower cost of living is not a new one. But the fact that creating both would significantly increase civic engagement should be introduced as a component of the argument for both.

A tree with no roots can easily be blown away. Let’s fight to make sure progressive San Francisco can’t be.