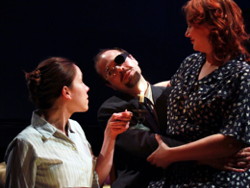 A BRIGHT DAY CALLED DAY is sometimes poignant, sometimes sad and often very funny. This powerful portrayal of political catastrophe is simply incredible. The time and place is in the 30’s up until modern day. We see the play through the eyes of a group of artists, actors, and communists living in Berlin prior to World War II.

The main character, Agnes, lives her life by avoiding conflict. Of course, she hopes that things will get better. You don’t have to be a huge fan of Tony Kushner’s plays. But most people are. I’m one of them. The play has bizarre shifts that bring us into the depths of hell from liberalism to genocidal fascism. Needless to say – I was fascinated.

This is a play that is masterfully explosive. The Political fiction can be very scary in this amazing gorgeous scenario. Kushner has a knack for words, as his play jumps around from poetry to prose. Yes, it’s a long play – but there is an intermission to give you a break. The story is riveting, as it brings out all the human foibles that you can carry in a German bag of tricks in 1932. The exhilarating actors are moody, athletic. Complex and talented in this inspired work.

Watching this marvelous play might wake up our own Weimar Republic. In fact it is suggested in Kushner’s play that Ronald Reagan was becoming too much like Hitler.

There have been many versions of this fascinating play – but from what I have seen before – this production at The Gough Street Theatre is breathtaking drama. Each scene is episodic and enriching. Not to mention the sexy scene where the two male leads take off their shirts to show off their muscular bodies. It’s a sure bet – that it will be as much of a thrill for you, as it was for me.

Yeah – this is one fast ride! Strange, but 2012 is beginning to seem like the Weimer Republic in 1933. The Cinematic Flashes of Germany in 1933 may not make you comfortable – but it will fascinate.

BRIAN KATZ THE DIRECTOR: “EASILY, ONE OF THE BEST DIRECTORS THIS YEAR.”

AT THE CUSTOM MADE THEATRE @ THE GOUGH STREET THEATRE

LINDA PURL – SONGS FOR THE MEMORY

Just like Snow White, — Linda Purl someone is jealous of her beauty and talent. You know the story – she falls asleep. A Prince kisses her, breaking the spell. I think the miracle happened on the famous Love Boat. It was then that Linda Purl realized that she could sing without a crown. See, if you’re lucky, kind, and beautiful like Linda, you may find your self, singing at the Rrazz Room also. Well, at least that’s what I believe.

Linda Purl at the performance that I saw gave us a chest full of jewels from Sondheim, Lerner & Loewe, Duke and Gershwin, A Latin Melody (you’ll want to get up and dance!) There is more, much more, as Purl pulls out all the stops with a Country Western Medley, of various songs. I loved it so much that I ran into H&M and bought a pair of cowboy britches – just to fit in.

Now don’t be greedy – I know that you want to know more – so here are a few more exciting moments that you won’t want to miss. You want magical? This is it: “I’ll Be Seeing You” (by Irving Kahal & Sammy Fain). It doesn’t get more emotional than this tune. Purl recently appeared on Broadway in “Tom Sawyer” and this song from the show this Lullaby “This Time Tomorrow” (Don Schlitz) – is rich and compelling. Here’s a lyric: “This Time Tomorrow, I’ll still be loving you.”

Here’s a free movie ticket – Purl takes us to the movies with the spectacular “Movie Of the Week) written by Ron Abel & Kirby Tepper. You know what – I don’t want to tell you about every song. I want you to discover Linda Purl on your own. Take my word for it though – Purl has a Rich and compelling voice that takes you back to dreamy beaches and love that comes and goes.

See, I had a dream that I could sing – but I can’t — Linda Purl sure put that Idea out of my head. But in my brain is a bunch of tunes that I left the Rrazz with. Near the end, Purl sang a remarkable version of “New Words” (Maury Yeston). I begged her – “Please don’t stop!). The audience thought I was insane. Well, maybe just a touch. But it really was a stellar evening. And I do believe in Fairy Tales. This was one of those nights.

AT THE RRAZZ ROOM www.rrazzroom.com