A Board of Downtown Mistresses? 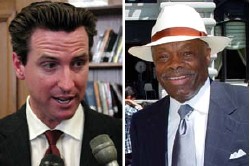 The year 1999 was a pretty grim one for progressives in San Francisco. Robert Haaland and I were standing on the corner of 18th and Castro doing outreach to the area’s tenants when we started discussing the Mayor’s race. Incumbent Willie Brown was a shoo-in for a second term.

A progressive when he was in the Assembly in Sacramento, Brown turned out to be a major disappointment as mayor. He sided with downtown interests against renters and working-class folks. He called the members of the Board of Supervisors his “mistresses in need of servicing.” With the exception of Tom Ammiano and Sue Bierman, that’s what they were.

Robert and I came up with an idea: A campaign to get Ammiano (an out gay man and a progressive) to run for mayor. Time was ticking out for Ammiano to enter the race. We gave it the old college try. Two weeks before election day, Ammiano jumped in as a write-in candidate.

It was classic David vs. Goliath. With a slingshot’s worth of grassroots money against a mountain of downtown dough, Ammiano made it into a run-off against Willie Brown.

Though the effort ultimately came up many votes short of defeating Brown, it propelled progressives into an amazing victory the following year, one that won us a majority of seats on the Board of Supervisors. The re-institution of district elections helped.

In the past eight years, that progressive majority has passed legislation to curb Ellis Act evictions of people with AIDS, seniors and the disabled; universal healthcare for all San Franciscans; and a living wage for employees of outfits doing business with the City.

Downtown interests opposed all of those measures. Now, those same big-money interests are pouring tons of dinero into defeating progressive supervisor candidates and electing themselves a board of mistresses. Hundreds of thousands of dollars are being shelled out by such conservative groups as the Chamber of Commerce, the Committee on Jobs, Plan C and the Board of Realtors.

Up for election are supervisors in the odd districts. Knowing that they can’t win in district 5 (the Haight/Western Addition) where incumbent Ross Mirkarimi is extremely popular or 9 (the Mission) where three progressives (David Campos, Eric Quezada and Mark Sanchez) are in the lead, the dark side of San Francisco politics is concentrating on 1, 3, and 11 where progressive incumbents are termed-out. They already have a good friend in District 7: Incumbent Sean Elsbernd.

Downtown is most eager to defeat Eric Mar in 1, David Chiu in 3 and John Avalos in 11. Why? Because these candidates are pro-renter, pro-universal healthcare and pro-living wage. Everything downtown is not.

Imagine a Board of Supervisors that can weaken rent control. Imagine one that can allow landlords to do all sorts of passthroughs to increase your rent. Imagine a city without rent control at all.

The slick full-color mailers are arriving everyday in districts 1, 3, and 11 viciously attacking Mar, Chiu and Avalos. As election day draws closer, these attacks will intensify. With the Chronicle and Examiner also on downtown’s side, progressives will be vastly out-resourced and out-spent.

Get involved. Come to a protest against downtown’s attempt to buy the election: Thursday, October 23, 5:30pm, Board of Realtors, Franklin and Grove. And get involved in the Mar, Chiu and Avalos campaigns.

Tell Downtown: No Board of Mistresses!