A Bad Week for the Chronicle 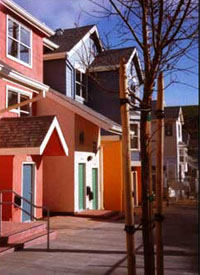 It’s not easy to have two false or misleading front page stories in the same week, but there is no underestimating the San Francisco Chronicle. On Tuesday, reporter and seemingly fulltime Schwarzenegger flak Carla Marinucci told readers that the Governor had “regained the political footing that led him to his 2003 recall election victory.”

On Thursday, the Chronicle front page featured an article on Hope VI, which it called an “urban housing success story.” In both cases, the reporters stories were not merely wrong, but way, way wrong, and were so misleading as to constitute “disinformation.” Marinucci’s February 21 article, “Momentum shifts back to governor” continued the Chronicle’s aggressive post- November election rebuilding of the Schwarzenegger legend. Since that time I have cited numerous articles reflecting the paper’s extreme pro-Arnold bias, and it appears that the worst misrepresentations of reality are authored by Marinucci.

This week Marinucci argued —contrary to polling data, which was conveniently omitted from the piece—that Arnold has returned to his pre-special election popularity. The chief basis for her conclusion is that the media has shown little interest in covering Democratic challengers Phil Angelides or Steve Westly, while the state’s governor was met with “a battery of TV cameras and an audience of hundreds” when he recently appeared in San Jose.

Well, I guess that means Arnold’s a shoe-in for re-election. Right.

The Chronicle never appeared to consider that cameras always follow the movie star Governor, and that they and hundreds of people accompanied him on his special election campaign when he lost every initiative.

Do you maybe think that there is not a connection between Arnold’s media coverage and statewide voter sentiment?

As for the lack of media coverage of Angelides and Westly, why would the media cover a primary race that is still over three months away? Pollsters will tell you that voters have not begun to focus on the Democratic primary for Governor, so the current lack of media attention means nothing.

Moreover, the Chronicle’s pro-Arnold zealotry has apparently led them to impose a virtual blackout on news generated by Angelides. Despite this bias, the latest polls show Angelides either ahead of Schwzrenegger or within the margin of error.

Field Poll Director Mark DiCamillo told Marinucci that Arnold’s poll numbers are not back to where the Chronicle reporter says they are. That’s classic: write a story that conflicts with the facts but then reveal the truth at the tail end of the article after most have stopped reading.

James Sterngold’s January 23 front-page story on the “urban housing success story” of the federal housing program known as Hope V1 is equally inaccurate, though it was not likely the reporter’s intent.

Hope VI was enacted in 1992 by the first George Bush Administration as a strategy for displacing low-income people from major cities. This displacement would occur by demolishing public housing—America’s last stop for the poor—-and then rebuilding only 50% of the units previously on the site.

Hope VI was to be accompanied by a change in HUD policy so that public housing would house those with higher incomes. This policy would make sense so long as the supply of housing available to the poor was not reduced—but eliminating housing for low-income families was always a central goal of the program.

Sterngold mentions in a single paragraph of a 45 graph story that “only half of the original number of units torn down are being replaced with similar deeply subsidized units.”

Think what that means. At a time of widespread family homelessness in America, the federal government spent billions to reduce our scarce low-cost public housing supply by half.

And they reduced this supply to facilitate urban redevelopment gentrification in St. Louis, Chicago, and cities across America

Sterngold approvingly quotes Missouri Senator Christopher Bond on how incomes in St. Louis projects rebuilt under Hope VI “increased by 71%.” That’s because Bond, the chief mover of the program, saw it as a strategy for eliminating poor people and African-Americans from downtown St. Louis—every housing activist in the city opposed this effort, and lawsuits were filed by senior and disabled tenants against this “urban success story.”

Where Sterngold likely got confused is in focusing on San Francisco, a completely atypical Hope VI story. Unlike nearly every other city in America, activists here demanded, and Mayor Willie Brown agreed, that one-for-one replacement housing occur under Hope VI.

In most but not all cases, Hope VI was an urban success story in San Francisco. But it was a nightmare for low-income families across America, who first had to endure the failures of HUD and local Housing Authorities to maintain the projects, and then were forced out when the projects fell into disrepair.

When I held a national press conference in 1999 on a study that criticized the loss of units under Hope VI, the chief of staff for then HUD Secretary Andrew Cuomo told me that my claim was unfair. He argued that many of the units had fallen into such disrepair that they no longer counted as housing, and this point is repeatedly made by the program’s defenders.

But why should the poor be punished because the federal government did not keep their end of the bargain and provide safe and well-maintained public housing?

To add insult to injury, budget cuts to Hope VI are now being used to prevent new low-cost public housing from being constructed. So much for keeping promises to those displaced and awaiting return to a rebuilt homes.

The Hope VI story is a national tragedy, but readers of the Chronicle will never know.