“9500 Liberty” Comes to the Sundance Kabuki 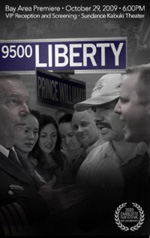 Last night at the Sundance Kabuki on Fillmore, saw the premiere of “9500 Liberty”, a compelling documentary by filmmakers Annabel Park and Eric Byler. Hosted by Citizen Hope, NDN, Netroots Nation and DailyKos founder Markos Moulitsas, 9500 Liberty chronicles the immigration culture war that tore apart a wealthy suburb of Washington DC. The filmmakers capture the escalating conflict as it unfolds in the streets, in online forums, and in the halls of county government. The film provides a cautionary tale of the devastation that may unfold at a national level and a blueprint for how to avoid the same tragic social and economic consequences. Before the film, Moulitsas, Supervisor David Campos and Human Rights Commissioner Michael Yaki, shared their views on immigration at the state, local and federal level.

Prince William County, Virginia became ground zero in America’s explosive battle over immigration policy when elected officials adopt a law requiring police officers to question anyone they have “probable cause” to suspect is an undocumented immigrant.

9500 Liberty reveals the startling vulnerability of a local government, targeted by national anti-immigration networks using the Internet to frighten and intimidate lawmakers and citizens. Alarmed by a climate of fear and racial division, residents form a resistance using YouTube videos and virtual townhalls, setting up a real-life showdown in the seat of county government.

The devastating social and economic impact of the “Immigration Resolution” is felt in the lives of real people in homes and in local businesses. But the ferocious fight to adopt and then reverse this policy unfolds inside government chambers, on the streets, and on the Internet. 9500 Liberty provides a front row seat to all three battlegrounds.

Annabel Park was born in Seoul, South Korea and immigrated to America when she was nine years old with her family. She grew up in Texas and Maryland. She studied philosophy at Boston University on a Melville Scholarship and political theory at Oxford University as a Marshall Scholar.

Parks’s life experiences include working with inner city children, management consulting, writing and directing theater, and combining new media and political activism. She won The Cameron MacIntosh Award for her playwriting at Oxford University and was selected as a fellow for Film Independent’s Filmmaker Lab in 2005.

In 2007, Park was the national coordinator for the 121 Coalition, organizing a historic grassroots effort to successfully pass U.S. House Resolution 121, also known as the “comfort women” resolution, which will be the subject of her upcoming film Journey Into the Divide.

Byler’s second feature Americanese (2006) was acquired by IFC Films and won both the Audience Award and the Special Jury Award at the South by Southwest Film Festival. His third feature TRE (2007) won the Special Jury Award at the San Francisco International Asian American Film Festival before being released theatrically by Cinema Libre Studio in 2008.

Born in Los Angeles, California, Byler grew up in Northern Virginia and in Hawai’i. He majored in film studies at Wesleyan University in Connecticut where his senior thesis film Kenji’s Faith (1994) went on to become a finalist for the Student Academy Awards, screen at the Sundance Film Festival, and win six film festival awards. Other Charlotte Sometimes accolades include a Best Supporting Actress nomination for Jacqueline Kim at the 2003 Independent Spirit Awards, the Audience Award at South by Southwest, and the Special Jury Award at the Florida Film Festival.

Following the film, the directors took questions from the audience, ranging from the aftermath, (yes, the good guys win), Virginia Governor Tim Kaine and President Obama’s role in the debate, their use of You Tube and the challenges we face on a national level, with forces arrayed by high-powered and well funded lobbyists. This is an extremely important film and as the directors mentioned, this isn’t just a Latino issue, it isn’t just an Asian issue. It’s also about the economic and moral questions that challenge us all. “This film needs to be shown in places like Georgia, Colorado, Iowa and Texas,” said Byler, “Not just Honolulu or San Diego where I just came from.”

“This is about 7 Eleven, not 9-11”, as one person in the film remarked. It’s also about real human beings and how we treat each other in a rapidly changing community. 9500 Liberty is both a cautionary and empowering tale we hopefully, can all learn from.

E. “Doc” Smith is a musician and recording engineer who has worked with the likes of Brian Eno, Madonna, Warren Zevon, Mickey Hart, Jimmy Cliff, and John Mayall among others. He is also the inventor of the musical instrument, the Drummstick. He can be reached via http://edoctorsmith.com