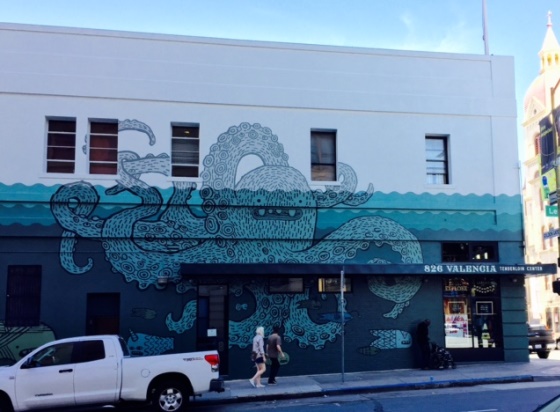 The latest example that San Francisco’s Tenderloin is steadily improving comes today as the nationally acclaimed 826 Valencia writing program opens its Tenderloin Center. Combining a writing program for kids with the King Carl’s Emporium retail store, the Center follows the July opening of the Tenderloin Museum  and the recent completion of a new dance and theater space at 80 Turk Street for CounterPulse.

The new Center signals that after years of fits and starts, the Tenderloin is on route to delivering the high quality of life and opportunities that its hard working residents have long deserved.

The neighborhood’s resurgence is being fueled by nonprofit cultural facilities and the reemergence of the bar and restaurant scene that once anchored the neighborhood’s legal economy.  The enhanced retail environment has contributed to sharply declining public drug dealing  across most of the neighborhood. Lower Turk and Leavenworth Streets have not been this free   of drug dealing for at least 35 years.

The new Center reminds everyone that the Tenderloin is a neighborhood of  children. The Tenderloin Community School, De Marillac Academy, and other schools and related programs help community kids get off to a good start.

Now the 826 Valencia Tenderloin Center will offer these kids direct access to nationally renowned writing programs.  These programs can give the neighborhood’s young people the tools to write about today’s Tenderloin just as legendary writers Dashiell Hammett, Miriam DeFord, and William Saroyan famously used the neighborhood as a backdrop for their writings.

I cannot think of a greater gift to the Tenderloin than the opening of the new Center. It is a tribute to the vision of 826 Valencia Executive Director Bita Nazarian and her entire Board and staff that they could see the potential of transforming a rundown corner market into the beautiful space that now exists on Golden Gate and Leavenworth.

I wrote last May that 826 Valencia’s expansion into a key corner of Golden Gate and Leavenworth would be a “Tenderloin Game Changer.” The Center is another example of the neighborhood taking the right path toward its  improvement.

If you are familiar with 826 Valencia’s pirate store in the Mission, you will want to get a look at the new King Carl’s Emporium. The store brings something that most neighborhoods take for granted but the Tenderloin has  lacked: a destination retail business.

During the Tenderloin’s long heyday from 1907 through the 1950’s, nearly every commercial establishment was a bar, restaurant, corner market or entertainment use. The Tenderloin’s bookstores and record stores are long  gone, and the neighborhood has lacked a retail store that brings people from throughout the city to patronize. King Carl’s Emporium is likely to fill that void.

As I describe in my book, The Tenderloin: Sex, Crime and Resistance in the Heart of San Francisco, Tenderloin stakeholders have struggled for decades  to get people from outside the neighborhood to patronize local businesses. Various strategies emerged, including  plans to build a tourist pavilion at Eddy and Taylor (never happened), the opening of a Sizzler Restaurant under the Cadillac Hotel (it closed), and the creation of Little Saigon (a strategy that succeeded). Even today the Tenderloin still does not attract sufficient people from other neighborhoods for its local businesses to thrive.

King Carl’s Emporium will bring people into the Tenderloin who have not recently if ever visited, and when they come they will return. They may return to visit the Tenderloin Museum, to see a dance performance at CounterPulse, to see improve theater at PianoFight, or to buy Tenderloin-made art at SPACE 236.

The Black Cat restaurant opens at 400 Eddy in June,  Onsen, a Japanese Spa and Tea Room, opens at 466 Eddy by the fall, and the new Big bar at Turk and Taylor should open in weeks. Popson’s specialty hamburger restaurant opened at Taylor and Market this week, and a replacement for the Lafayette Café on Hyde is a few months away.

It may well be the case that more substantial new businesses will be opening in the Tenderloin since 2015  than in the previous fifty years (the above is not a complete list). Many visitors to the Tenderloin Museum say they have never before been to the neighborhood or have not returned for decades; King Carl’s Emporium will have a similar impact.

826 Valencia’s Tenderloin Center may be even more critical at changing longstanding and often unfairly negative perceptions of the Tenderloin neighborhood.

The Tenderloin is safer today than at any time since the 1970’s. Lower Turk has gone from one of the city’s worst blocks to one of the safest. Leavenworth Street, where 826 Valencia is opening, is finally fulfilling the vision that Leroy Looper aspired for the area when he bought the rundown Cadillac Hotel in 1977 (Leroy is not physically with us, but his spirit of hope for the Tenderloin lives on).

Tenderloin police redistricting has made a big difference. So has the commitment of the prior Captain Jason Cherniss and the current Captain Teresa Ewins. The 100 block of Hyde, 400 block of Ellis, and Golden Gate and Jones remain problem spots, but the overall improvement is noticeable and striking.

SRO residents have been the driving force behind neighborhood safety improvements. These are the low-income, longterm residents often forced out when low-income neighborhoods  improve, but who work to improve the Tenderloin because they live in the roughly 33% of its housing stock that is protected from the market by nonprofit or government control.

That is a signature fact that helps distinguish the Tenderloin from so many other former working-class neighborhoods whose low-income residents were displaced. Nearly all Tenderloin residents are protected from excessive rent hikes or eviction without cause, which are the strongest of all anti-displacement protections. This helps explain why the Mid-Market tech boom produced none of the displacement impacts in the Tenderloin that critics predicted.

The Tenderloin is going down a different path from other formerly working class neighborhoods, and I detail in my book why the neighborhood will not be gentrified.

So visit the remarkable new King Carl’s Emporium and check out what else the Tenderloin has to offer. You won’t be disappointed.

Randy Shaw is Editor of Beyond Chron and Director of the Tenderloin Housing Clinic, which he co-founded in 1980.