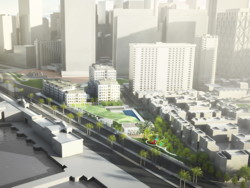 After the San Francisco Board of Supervisors approved 8-3 a luxury condominium project for 8 Washington Street, the Bay Guardian claimed “the progressive movement and the battle for housing balance and economic justice in San Francisco got walloped.” San Francisco Tenants Union leader Ted Gullicksen said, “Just what we need-more housing for the rich. Sups. Kim, Mar & Olague support 1%; Avalos, Campos, Chiu stand with 99%.” But neither progressives nor “the 99%” had anything at stake in this fight. Instead, 8 Washington is a battle between the 1%. The project is in an upscale neighborhood, and the super-wealthy Boston Properties, which owns Embarcadero Center, is the leading opponent. While the 99% will get some benefit from the affordable housing and jobs triggered by the project, as well as from the increased tax revenues and other public amenities, 8 Washington is irrelevant to a progressive agenda.

I have not written about 8 Washington, because fights between rich people do not interest me. I understand why Telegraph Hill residents facing blocked views and Golden Gateway tenants angry at their landlord oppose the project, but let’s not mistake those concerns for the compelling economic injustices faced by “the 99%.”

Outside of some long-term tenants at Golden Gateway, there is not a single low-income person living in close proximity to 8 Washington. Why are some making this project into a new progressive “litmus test”?

First, any priority for private attorney Susan Hestor becomes a priority issue for the San Francisco Bay Guardian. Hestor was hired to oppose 8 Washington, and the Guardian has written constantly about the alleged evils of the project.

Aaron Peskin also opposes 8 Washington. The Guardian regularly elevates Peskin’s campaigns, even over obscure issue like Sharp Park, into fundamental tests of a politician’s commitment to social and economic justice.

While tenant activists denounced the project’s luxury housing, there is no connection between 8 Washington and the preservation of rental housing, rent control, affordable housing (other than providing millions in fees to build such) or any other issue commonly included in the tenant agenda.

David Chiu took a leading role opposing 8 Washington to make up for his deciding vote approving the Parkmerced development. That project will negatively impact the 99%—i.e. the existing tenants whose homes will be demolished and whose quiet enjoyment will suffer due to years of construction noise.

Chiu’s all out battle against 8 Washington won favor of tenant activists displeased by his Parkmerced vote. He also prevented a possible challenge this November from a Telegraph Hill Dwellers-backed candidate.

Finally, 8 Washington is a tool in the Guardian’s ongoing attacks on District 5 Supervisor Christina Olague. Although Olague has spent more time directly helping San Francisco’s poor than all of the Guardian’s editors combined, the Guardian doesn’t trust her because she is backed by Mayor Ed Lee.

8 Washington is among the issues the Guardian is lining up to justify not endorsing another woman of color who meets all the standard progressive credentials but fails the weekly’s own unique tests. We see this in the Guardian’s consistent lack of support for Jane Kim, despite her consistently progressive record and backing from progressive colleagues on the Board.

Because Olague has a long history backing tenants, affordable housing, and every social justice measure that she has had the chance to vote on, the Guardian must transform non-progressive issues like 8 Washington into progressive litmus tests that Olague fails to meet. Using 8 Washington as such a test is particularly misplaced because Supervisor Eric Mar also voted for it – many activists see Mar, a longtime immigrant rights and labor activist, as defining progressive politics in San Francisco.

8 Washington is also a misplaced progressive litmus test by the Guardian’s own standards. The weekly never applied such a test when Daly and Peskin voted for the far more outrageous Rincon Hill luxury tower—why does the Guardian have a different standard for the Board’s white male progressives than for supervisors of color?

Olague is the Guardian’s chief target. Prior to 8 Washington, the Guardian recently attacked Olague’s vote for various changes to the local historic preservation process because it “will take away a tool that the left can use to stop uncontrolled commercial development.”

Where has “the left” used this “tool” to do this in San Francisco? The Guardian does not say. How has the new legislation prevented this tactic? Another mystery. Progressives were on both side of this esoteric issue, which had nothing to do with a progressive agenda.

Central to a progressive agenda should be ensuring that residents of low-income neighborhoods have the same right as those in upscale areas to safety and security when they walk down their sidewalks. There is no greater example of social inequality than disparate policies that tolerate drug dealing and crime in low-income communities that would not be tolerated in wealthier areas.

Jane Kim and Christina Olague have addressed this core progressive issue for years, and Kim has spent considerable time working with Tenderloin and Sixth Street residents on these problems since taking office. But since this issue does not affect the middle to upper-income white demographic that the Guardian’s progressive agenda primarily encompasses, the weekly never raises alarm bells about the livability of low-income neighborhoods as it did around 8 Washington, Sharp Park and many similar issues.

Incredibly, the Guardian publicly defended two markets in the Tenderloin charged with buying drugs from undercover police. It actually criticized City Attorney Herrera for suing the stores, one of which forced low-income Latino children to walk by a crowd of drug dealers outside the market on their way home from school.

Tenderloin families are among the neighborhood’s leading anti-crime advocates, but their concerns fail to meet the Guardian’s litmus tests for “progressive.” 8 Washington is a world away from their daily struggles, as is Sharp Park, historic preservation reform, and other pet Guardian causes.