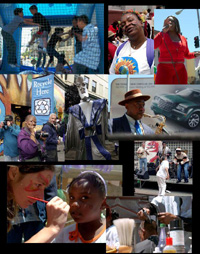 Sixth Street is a residential neighborhood, but many San Franciscans who never go there view it with disgust and disdain. While it may be a rough part of town with persistent problems of drug dealing and the like, it is also home to over 1,000 low-income tenants who struggle every day just to get by. And on Saturday, August 4th, the neighborhood’s residents will get their day to shine – as they sponsor the 6th Annual “Positively Sixth Street” street fair, where a diverse group of artists and musicians will entertain the crowd while residents get a free hair cut, hot dogs grilled by the local Police captain, and connections with vital social services. Other neighborhoods have their annual street fairs, but the “Positively Sixth Street” fair serves a special purpose in bringing the community together.

“People who live on Sixth Street live a pretty rugged existence,” said Mark Ellinger, who until last year lived at the Shree Ganeshai Hotel at 6th and Jessie. “They don’t get much in the way of opportunities to enjoy themselves, or partake in activities that reinforce a sense of community. What’s at the heart of the Sixth Street Fair is making people who live on 6th Street feel like they are a part of the community.”

The idea of a street fair originated in late 2001 with a small group of neighborhood residents and service providers, along with a grant through Safety Awareness for Everyone (SAFE.) The group resolved to provide some help apart from the context of their everyday efforts – a fair for Sixth Street residents – that would provide a day of celebrating community and a chance to help residents strengthen the neighborhood.

One of the fair’s highlights in previous years has been the involvement of Police Captain Dennis O’Leary of the Southern Station. He would arrive at the fair with 500 hot dogs (donated by the SFPD) and would grill them and hand them out to the neighborhood residents, free of charge. This year, the plan is to get more police officers actively involved in the Street Fair, so as to improve neighborhood-police relations.

There are many annual street fairs throughout the City – like Folsom, Castro, Haight and Gay Pride – but the Positively Sixth Street Fair provides an additional purpose: it will help connect the neighborhood’s residents with essential social services that they depend upon. Over 35 non-profit groups will be tabling at the fair to offer mental health, housing and job coordination assistance – including information from where to obtain a free lunch to how to write a resume.

In past years, the fair – which was normally held in June – had a turnout of up to 1,800 people. This year, in order to get a healthier turnout because of better weather, the Planning Committee moved it to early August. “We’re also making a more concerted effort of bringing people outside of the community,” said Ellinger. “When we approach sponsors for money, people are eager to be a part of it because we have a good history.”

For one day of the year, the Sixth Street neighborhood comes together for a day-long celebration of community. The Positively 6th Street Fair shows the city its diverse and soulful face in an often maligned part of town, allowing residents to come together – while showing the rest of the City what Sixth Street has to offer. San Franciscans are invited to gather this upcoming Saturday at the corner of 6th and Minna – from 11:00 a.m. to 4:00 p.m.