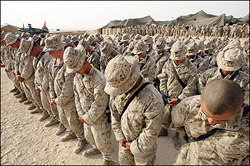 In case further evidence is needed regarding the Bush Administration’s disgraceful priorities, of the $1075 billion in discretionary spending in the FY 2008 budget, 67% or $717 billion, is targeted for military/national security spending. And some wonder why public school classes are so large and college tuition so high, why over 40 million Americans lack health insurance, and why tens of millions live in inadequate and/or unaffordable housing. And why America “can’t afford” to tackle global warming or other non-military problems.