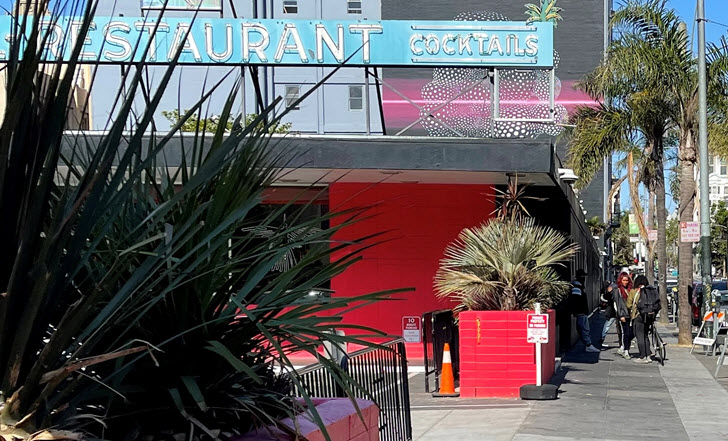 The block of 600 Eddy between Larkin and Polk includes the legendary Phoenix Hotel, the Chambers and Son and Garden restaurants, and two affordable housing projects with a third around the corner.

So why has San Francisco turned the block over to drug dealers?

Dealers start claiming spots on the 600 Eddy block as early as 9am. They do business well into the night.

The Phoenix Hotel and Chambers restaurant have pleaded with police to intervene. But nothing has changed.

Why is this happening?

Historically, Tenderloin drug dealing has occurred in front of vacant buildings, parking lots and/or where the property owner does not object. Until 2020 groups of dealers were not permitted to sell in front of long thriving Tenderloin businesses whose owners have complained to police.

The implicit theory—that the police should protect small businesses that make major investments in the neighborhood—has changed since 2020. Allowing an open drug market on the 600 block of Eddy highlights this shift.

Here’s the core question: What public official decided to turn a thriving Tenderloin block into an open drug dealing supermarket?

When was the public meeting on this? Where was it held?

San Francisco requires public meetings to debate building permits and business licenses. How does the siting of open drug markets get approved in secret?

San Francisco showed at Union Square that it knows how to send stop illegal conduct if it chooses. Why hasn’t the city chosen to do so on a block with high-quality restaurants and hotels along with affordable homes?

I brought newly appointed Police Commissioner Debra Walker by the 600 block last Tuesday (she has a June 27 confirmation hearing at the Board). There were at least 50 drug dealers bordering the Phoenix Hotel. The scene was as bad as I have seen it. I regularly check the block and get almost daily reports from others (for example, recovery activist Tom Wolf recently tweeted that he counted 24 dealers on the block).

Urban Alchemy feels its workers need police support to safely patrol a block that drug dealers now see as their home. This support has been missing.

But it may soon arrive.

David Lazar is the new Assistant Chief of Operations for the SFPD. He has a long history of strong community relations in Chinatown. Lazar has stated he is committed to ending open air drug markets in the Tenderloin.

Lazar and his hand-picked group of twenty Tenderloin officers want to protect 600 Eddy’s small business owners, tenants, and property owners from drug dealers. But that requires buy in from San Francisco’s political leadership.

City Hall must insist to the SFPD that it expects 600 Eddy to be cleared of dealers. It’s really not more complicated than that. San Francisco didn’t let Louis Vuitton get robbed night after night. But it accepts drug dealers dominating the 600 block of Eddy to this day.

Drug dealers are so comfortable in the Tenderloin and SOMA that the cartel delivers them meals multiple times a day. This sends a comforting message to dealers but a troubling one to those living and working in the neighborhood.

Prospects for Change: A New DA

The increased police presence over the past month has reduced the Tenderloin’s open drug dealing sites. But the 600 block of Eddy, 300 block of Hyde, Mission between 8th and 9th streets and 8th street between Market and Mission are as bad if not worse than ever.

Will a new DA help close these drug markets? If not, Mayor Breed picked the wrong District Attorney.

I believe San Francisco’s next DA will quickly highlight their commitment to ending open air drug dealing. It’s the most visible and impactful move they can make to distinguish themselves from Chesa Boudin before the November election.

A new DA can send a very different public message about San Francisco’s tolerance for open drug markets. In tandem with Deputy Chief Lazar commanding the police strategy, progress can finally be made.

The 600 block of Eddy should be the test case for this progress. If San Francisco cannot reclaim a block with an historic hotel, destination restaurants and three affordable housing sites, the city is even further off track than its critics claim.

The Tenderloin is a lot closer to becoming a safe and healthy neighborhood than many realize. New restaurants are opening, entertainment and cultural venues have reopened, and most blocks are drug-dealer free.

But allowing fifty plus dealers on multiple blocks undermines public perceptions of the entire neighborhood.

No other major American city allows drug dealers to comfortably sell lethal Fentanyl only blocks from City Hall. As the summer of 2022 unfolds, San Francisco must finally reclaim its streets from drug dealers.