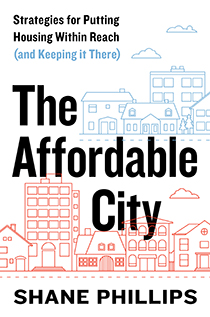 I argue in Generation Priced Out that whether cities improve affordability and increase racial and economic diversity is a question of political will. Ending homelessness, overcrowding, and long car commutes is not like a search for the COVID-19 vaccine; instead, we know that a combination of increased funding and new policies can solve these problems.

Those skeptical of policy solutions are particularly encouraged to read Shane Phillips’ new book The Affordable City: Strategies for Putting Housing Within Reach (and Keeping it There). Phillips, who manages the UCLA Lewis Center Housing Initiative, puts forth 54 policies that he believes will increase housing affordability. I agree with almost all of them. And I think most readers will as well. The challenge, of course, is that the areas of policy disagreement are so impactful that their continuation drives unaffordability.

Phillips urges cities to simultaneously pursue the Three S’s: Supply, Stability and Subsidy. This means backing abundant housing, strong tenant protections and increased funding for affordable housing. The three S’s resemble the Three P’s set forth in the Bay Area’s CASA Compact: Preservation, Production, and Protection. Both support a comprehensive approach to the housing crisis that critics often wrongly accuse backers of the “production” element of lacking (consider claims that cities cannot “build their way out of the housing crisis” when few advocates say otherwise).

After laying this foundation Phillips’ uses short chapters to list his policy prescriptions. Most are not new; in fact, I think San Francisco has enacted every policy that he recommends to promote tenant stability. His boldest proposals involve homeowners. He notes, “Imagine an alternative history in which our country focused on maintaining affordability for everyone instead of promoting wealth accumulation only for some….In that world, what is good for homeowners wouldn’t have to come at the expense of renters and future generations.” Phillips also writes, “The real estate industry is full of people making money but adding little value. Don’t accommodate them.”

Unfortunately, every high housing cost city does more than simply “accommodate” homeowners. Most  base their entire land use policies on promoting homeowner profits by artificially restricting housing supply. Exclusionary single-family zoning, a racist and elitist policy which Phillips joins in denouncing, still promotes “wealth accumulation” for existing homeowners. Yet as I describe in my book, Minneapolis and Portland are the only major “progressive” cities that allows multi-unit buildings in all  residential neighborhoods (Cambridge now allows affordable apartments in all communities).

As Phillips knows, structuring urban housing polices to enrich existing homeowners comes “at the expense of renters and future generations.” The YIMBY movement is a response to the generational divide around housing policies.

Phillips does not specifically join my call to tax homeowner profits generated from stopping new housing. But that’s one strategy for promoting affordability rather than wealth accumulation among longtime homeowners. This group is also disproportionately white, as redlining, racial covenants and racist federal housing policies prevented Blacks in the 1950’s and beyond from buying homes in more desirable white majority neighborhoods. Today, Black Americans are steadily priced out of  “progressive” cities” via exclusionary policies that have proved hard to end.

Many defend the status quo claiming that homeownership is their chief strategy to fund their retirement. They plan on selling their home and living off the profits. But Phillips forces us to think about why Americans have to turn to a housing appreciation model that prices out younger generations. Those buying homes in high housing cost cities prior to 2011 have enjoyed appreciation beyond their wildest dreams . Yet urban policies do exactly what Phillips sees as worsening affordability— promoting wealth accumulation only for some instead of maintaining affordability for everyone.

Phillips’ clearly meets his goal of laying out all of the possible policy prescriptions to make cities more affordable. His common sense prescriptions are so realistic and obvious that those not familiar with opposition arguments may wonder why his plans have not already been implemented. A chief answer, of course, is homeowners’ political clout. As inequitable as the land use status quo is, those benefiting from the system do not want it change. And it makes no difference that they identify as “progressive.”

Nowhere is this dynamic clearer than in Phillips’ home city of Los Angeles. This completely Democratic-controlled city has among the nation’s worst affordability and homelessness crises. Let’s hope city council members pick up copies of The Affordable City and consider at least some of its solid recommendations.

Or Phillips should consider sending each councilmember an inscribed copy. This might encourage them to pursue greater affordability for those priced out of the city rather than continue to prioritize the wealth of existing homeowners.