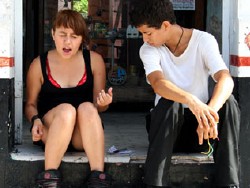 Dante Lam’s “The Beast Stalker” foregrounds itself with a disgraced cop’s struggle against a determined hitman/kidnapper over a little girl. Action fans will enjoy Bruce Law’s choreographed car chase (note the “Amores Perros” reference) as well as several gritty street-level fights. The kidnapped girl’s perils believably invoke child endangerment fears. But this Hong Kong actioner ultimately compels with its careful balancing of conflicted characters living with the consequences of some very bad decisions.

Fernando Eimbecke’s second feature “Lake Tahoe” sports a placid visual surface like the titular lake. Yet ripples of injury and pain lurk beneath. Teenager Juan’s langorous quest for an automobile part proves less important than his unintended search for himself. Among the memorable characters Juan meets on his journeys, a kung fu-loving teen mechanic particularly stands out. The film ultimately delivers precise visual and emotional moments that feel like well-placed kung fu blows.

The titular “575 Castro Street” of Jenni Olson’s short is the address of slain supervisor Harvey Milk’s camera shop. Viewers of the film “Milk” know this shop as the base for the gay leader’s political runs for office. But the shop also processed the Super 8 studies in light and motion that became the basis for the San Franicsco Gay Film Festival.

Olson’s short pays homage to both these legacies. Visually, the viewer is treated to static shots of the shop’s interior, which was meticulously reconstructed for “Milk.” Reflections from the outside traffic resemble rivers of quietly flowing light. The effect renders the shop as a contemplative shrine.

The audio track will rattle certain viewers’ cages. Despite being recorded over three decades ago, Harvey Milk’s posthumous post-assassination message still has the power to discomfit. His reminders about the evils of organized religion, complacency in the LGBT community, and those who put their egos above the movement is still timely advice that has been sometimes ignored in the decades after his death.

Olson’s union of these two individually powerful elements creates a mournful whole. Milk’s monologue feels like wind whispering through a mausoleum. But it also stimulates the viewer’s imagination to visualize the many political meetings in that shop and to muse over the sociopolitical changes brought to the LGBT community by ensuing decades. Unmediated by Sean Penn, Milk’s voice still compels.

Steven Okazaki’s short “The Conscience Of Nham En” feels ironically named. The titular personage demonstrates no remorse at his involvement with the Khmer Rouge. Nor does he seem haunted by the memories of the 6,000 people whose photos he took minutes before they were executed by the Cambodian dictators. To him, standing by and unemotionally photographing the Khmer Rouge victims was simply a job or possibly even a means of personal survival.

Yet Nhem En’s claim of personal survival feels thin in retrospect. Even if one grants the necessity of his “live or die” choice, the ex-Khmer Rouge photographer fails to show he helped anybody besides himself with the extra life given him.

It is left to a couple of survivors of the S-21 death camps to provide the film’s conscience. Their detailed recollections of their horrific experiences will frequently invoke winces. The survivors also serve as living reminders that state-sponsored torture is less about gathering information and more about sadistically destroying community bonds. Okizaki’s final shots of street-level Phnom Penh residents hopefully demonstrate the long-term failure of the Khmer Rouge’s goals.

Laurie Hill’s award-winning “Photograph Of Jesus” enjoyably plays with the absurdity of impossible requests for pictures of dodos living in the wild or even one of the actual Son Of God. Using stop-motion animation, Hill’s short creates a mad world of possibilities where Yetis trolling through photo archive file drawers seem perfectly normal. In the end, the viewer is reminded of the large gap between actual existing knowledge and belief in non-existent knowledge.

The reminiscences of ex-child slaves Abuk and Machiek provide the spine for David Aronowitsch and Hanna Heilborn’s disturbing animated documentary “Slaves.” The film employs abstract shapes rather than realistically depicted people to illustrate the horrific ordeals these two children endured for several years. That visual choice captures how much information these children processed of their seemingly unending captivity. But the emotional heart of the film remains Abuk’s and Machiek’s stories of such horrors as being kidnapped into slavery at age 5 or having one’s feet impaled by harpoons to prevent escape.

Jonas Odell’s “Lies” proves to be the most visually dazzling short of the program. Three different animation styles appropriately match the emotional undercurrents of the narrated tales of lying. From a visual riot of accounting graphs to an abstract illustration of a faceless woman, Odell manages to make these tales more interesting than just animated talking heads. On the other hand, the amount of visual information overload in these segments may require seeing this short twice.

(The 4-Star Theater (Clement & 23rd Avenue) has announced “The Beast Stalker” as a coming attraction. “Lake Tahoe” will be screened in July or August at the Sundance Kabuki Theater (1881 Post, S.F.) as part of the San Francisco Film Society’s SFFS Screen series. “The Conscience Of Nhem En” will be broadcast on HBO later this year. “A Thousand Pictures” will have its next screening at the Kabuki Theater on May 6 at 2 PM)