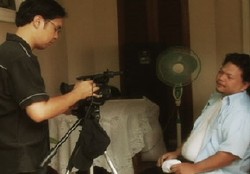 Barbara Ettinger’s documentary “A Sea Change” *is* your grandfather’s global warming documentary. That is, if your grandfather is environmentalist Sven Huseby. For grandson Elias’ sake, Huseby travels to several different nations to learn about ocean acidification and attempts to solve the problem.

Ocean acidification, the literal increase of our oceans’ acid levels, is a byproduct of global warming. The film’s metaphor imagines dropping a can of Coke into a bathtub full of water on a planetary scale. The increasing acid levels cause the shells of pteropods to become brittle and the butterfly-like creatures to eventually die.

The trouble is pteropods form the base of the ocean’s food chain. Destroy them and you could eventually “imagine a world without fish.” San Francisco Bay Area viewers can start guessing the ramifications of that scenario.

Human denial of various colors has unfortunately played a large role in fostering inaction over mitigating global warming’s effects. Ettinger wisely gets around this problem by grounding Huseby’s search for answers as a personal quest. Through the bits of personal background mentioned in the film, the viewer learns the long family tradition behind Huseby’s love of the sea. The grandfather’s loving and playful relationship with his grandson Elias shows Huseby wants to pass this wonderful family tradition on to the next generation but may be prevented from doing so by ocean acidification.

Loving and gorgeous footage of undersea life also reinforces the stakes of the ocean acidification problem. These beautiful shots will put many viewers in touch with their inner Elias.

“A Sea Change” offers information to balance its visual beauties and varieties of love. But the presentation of this information is kept at a layperson level thanks to very vivid real world examples. Dozens of Exxon Valdez-level eco-disasters occurring simultaneously on the world’s coastlines proves a very chilling metaphor for ocean acidification’s effects.

Ettinger faced a difficult decision in discussing solutions to ocean acidification. Does one focus on common sense solutions such as mass development of alternative energy sources and risk appearing simplistic? Or do you discuss such complex problems as building the burgeoning economies of China and India without increasing global warming…and risk further inaction? Ettinger opts to focus on common sense solutions. Given the enormity of the disaster awaiting our seas resulting from inaction, “A Sea Change” is good enough to start the conversation for action moving on a popular level.

The Philippine film “Confessional” does basically tread unfortunately well-worn cinematic territory. It is a mockumentary whose principal character is a videographer who wants to film truth instead of lies. Yet the film manages to rise above its cliched premises by going beyond laughing at its hapless lead.

“Confessional”’s opening title cards honestly admit that some of its humor is culturally specific. Yet one can see parallels between Manila and Cebu (“Confessional”’s main setting) and Paris and any French city outside of Paris. It also helps that lead character Ryan Pastor permanently remains two steps behind the jokes made around him. Even when confronted with evidence that ex-mayor Lito’s stories *are* the truth, he remains in denial.

What ultimately lifts “Confessional” above cliché is its implicit metafictional embrace of the formula “Lies + Lies = Truth.” Excepting the Sinulog religious festival and video contest, every character and event in the film is a fiction. But the film as a whole reveals a truth about the Philippine people’s ability to accept and rationalize deception. Yet one suspects that quality is not specific to just that country’s people.

Two films with the same dramatic setting and screened within the space of six months do not necessarily constitue a cliché. Both Lea Pool’s “Mommy’s At The Hairdresser” and Philippe Falardeau’s “It’s Not Me, I Swear!” are Canadian films which portray a 1960s Canadian suburb as a psychologically oppressive hell of lies and family dysfunction. But where Pool opts for naturalism, Falardeau dives headfirst into physical and emotional injury mixed with guarded tenderness.

Falardeau’s central character Leon initially seems to be a dramatic mistake. While a novel idea, this lying vandal boy seems so destructive that less tolerant viewers will hope for his punishment long before the film’s halfway mark. For example, sympathy isn’t necessarily built by seeing Leon take advantage of his neighbors’ absence to break into ther house and piss on the contents of a bedroom closet.

Yet this very troubled boy ultimately earns viewer sympathy. Antoine L’Ecuyer’s amazing work as Leon persuades viewers that the same boy who could deliberately set his parents’ bed on fire can also struggle with his feelings for a person that he doesn’t feel hostile towards. Setting the story within Leon’s initially questionable viewpoint allows the viewer to look behind the boy’s capacity for voluntary self-injury and see why such actions appear reasonable and even logical. The neighbors display such obnoxious self-satisfied smugness that it’s hard to feel more than formal sympathy when Leon vandalizes their homes. Most importantly, Falardeau grounds Leon’s rage in something more than a sociopathic nature. What the boy rages against is his relative lack of power to change such
uncontrollable things as being reunited with his mother.

Have the Bruno Hebert novels that formed the basis for Falardeau’s work received American distribution? If those books are half as assured as Falardeau’s film, they will make for … interesting wince-inducing reading.