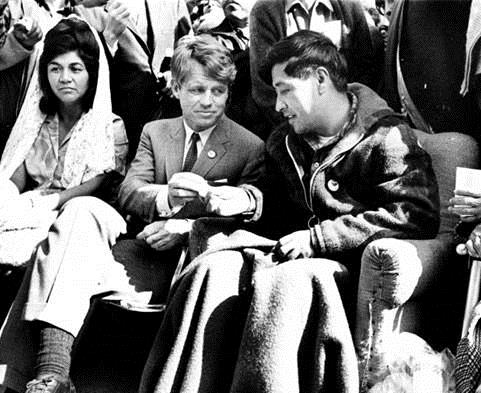 On February 15, 1968, Cesar Chavez took one of the boldest, strategically creative and principled actions in the history of social change activism: he began a fast. Chavez’s fast for nonviolence has been etched into history when he ended his fast on day 25 next to Senator Robert Kennedy. Chavez had asked Kennedy to join him in ending the fast, and the photo of the two of them together is a lasting image of the 1960’s.

I discuss both the immediate and longterm significance of Chavez’s 1968 spiritual fast in my book, Beyond the Fields: Cesar Chavez, the UFW and the Struggle for Justice in the 21st Century. It was the first of what would become a series of Chavez fasts, but no other so powerfully galvanized the farmworkers movement.

One cannot separate Chavez ending his fast with Kennedy from the latter’s announcement only six days later that he was running for President. The UFW would play a pivotal role in Kennedy winning the June California primary.

UFW icon Dolores Huerta was standing next to Kennedy when he gave his victory speech at the Ambassador Hotel in Los Angeles. Gunfire soon erupted, killing Kennedy and setting back the dreams of a generation of activists excited over the prospect of electing Robert Kennedy as President.

Many believe that the United States has never recovered from that killing.

Inspired by the spiritual fasts of Mohandas Ghandi, Cesar Chavez turned the fast into an organizing tool. The fast became part of the activist toolbox for progressive movements.

Maria Elena Durazo, a child of farmworkers now running for State Senate in Los Angeles, held a rolling fast in 1999 when she was president of UNITE HERE Local 11. The fast was against USC for refusing to protect union jobs from being contracted out. Chavez’s UFW disciple Eliseo Medina engaged in a lengthy fast in 2006 (discussed in my book) at the University of Miami on behalf of janitors who were also fasting.

There were no IPhone cameras to video the magic Chavez’s 1968 inspired, only statements from those there. But it remains a day firmly etched into the history of social justice movements in the United States.

And a day worth remembering on its 50th anniversary.

Randy Shaw is Editor of Beyond Chron. He appears in the must see 2017 documentary on Dolores Huerta, Dolores.