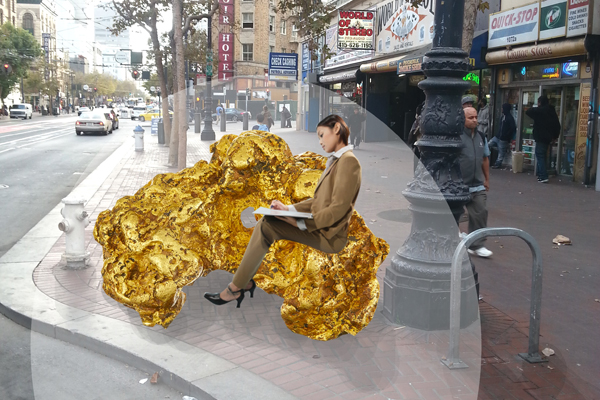 October 6 launches the three day Market Street Prototyping Festival featuring 40 art installations to “spur curiosity and connection on Market Street.” The Festival attracts thousands to Mid-Market to get a first-hand look at the area’s progress five years after the city’s  “Twitter” tax incentive plan sought to revive Mid-Market and the adjacent Tenderloin.

The tax plan’s passage has spurred more Mid-Market investment than in the prior fifty years combined. A key component has been the restoration of historic buildings.

Twitter’s occupation of the long dormant SF Furniture Mart restored the building’s historic luster and increased foot traffic on Market. While the street level retail space is still seeking the right blend of food options, there was no active retail prior to the Shorenstein Company’s purchase of the building.

Zendesk, one of the world’s most socially responsible corporations. came to Mid-Market and restored another of the area’s premier landmarks, the 1909 Eastern Outfitters building at 1019 Market. ACT renovated the exterior of the historic Strand Theater to create the ACT-Strand, and the once beautiful turned eyesore tall green building at 995 Market was  restored to the best looking building it could be (the green modernization tiles could not be removed without taking the underlying bricks with them).

Market Street was once San Francisco’s Champs–Élysées or Great White Way. Its fall and long decline since the death of its theater industry has been an indictment of the city’s political leadership.

The street has always been about more than buildings. That’s why among the biggest positives to occur in past five years are the Market Street bike lanes. Thanks to the never-give-up attitude of the San Francisco Bicycle Coalition, more people are biking down Market than ever before.

Cars have never worked on Market Street. I describe in my book, The Tenderloin: Sex, Crime and Resistance in the Heart of San Francisco, how Market Street was choked in the 1930’s with traffic jams after the Bay Bridge and Golden Gate Bridge were built. Removing private cars is critical to Mid-Market’s success, and new businesses like Popson’s and Equator Coffee at 6th and Market opened or expanded outdoor seating as bike traffic increased.

The other major good news for Mid-Market is that three long stalled projects are finally moving forward. These include two at 7th and Market, the renovation of the former Renoir Hotel (it was long the Shaw Hotel and will open as The Proper) and the transformation of the former Grant Building into Yotel San Francisco, a tourist hotel.

The third is the completion next year of the former Market Street Place, renamed as 6 X 6. I wrote what now appears to be an overly optimistic article on July 9, 2010 (“San Francisco Takes Giant Leap Forward on Mid-Market Revival”) after the Planning Commission approved the project. Originally called City Place, it was the most significant commercial Mid-Market project in at least 70 years. Unfortunately, the national real estate crash killed the project’s financing.

No longer the linchpin of the area’s revival, its opening will improve one of the most long troubled parts of Mid-Market (and if 6 X 6 wants to really get raves from Beyond Chron, open a bowling alley, a prospect hinted at in JK Dineen’s excellent article on the project.)

It’s not all been good news. Due to San Francisco’s uniquely time-consuming process for approving development projects, two key Mid-Market sites have been sitting at the Planning Department for years.  Both 950 Market and 1028 Market have not even had a Commission hearing for approval.

Both projects cover areas that have languished for decades. Yet neither were fast-tracked at Planning despite their importance to Mid-Market.

950 Market— 250 hotel rooms and 242 condos—finally gets a hearing on October 27 and will likely be approved. The rental housing project at 1028 Market has no hearing date and its owners were recently told by Planning that they could only build 40 units on the site. Planning wants to preserve the former and long rundown Hollywood Billiards building which would be demolished under the housing plan.

I have no doubt 1028 Market Street will ultimately be approved per the developer’s plans. But Planning’s delays on this project have slowed Mid-Market’s revival.

Also disappointing is the long down times for two key sites at 7th and Market. Financing problems and then a fire slowed the renovation of The Proper, and changes in ownership delayed the Yotel. 7th and Market may be the intersection of Mid-Market where people feel least safe, and having these projects uncompleted for so many years has hurt the area.

That’s disappointing. Fortunately, a plan by Illuminate the Arts to install colored lights in the center of Market Street above the Muni power lines is moving forward on its own. Bike lanes and other improvements have also moved forward while Better Market Street’s implementation awaits.

I think everyone involved in the push to enact an economic development strategy for Mid-Market in 2011 thought change would come faster than it has. Market Street is vastly improved over 2011, but there is still much work to be done.

The Market Street Prototyping Festival shows what a galvanizing and exciting area this long neglected part of San Francisco can be. Mid-Market should be similarly enjoyed year round, and despite ongoing problems its blooming has begun.