5 Lessons from “Save the Mission” Hearing 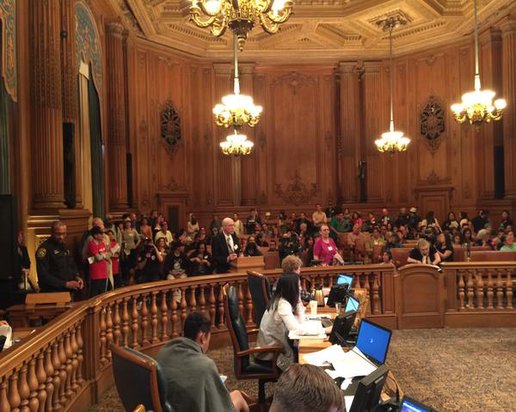 Now that the ten hour plus Supervisors hearing on the Mission market rate housing moratorium is over, it’s time to take stock. Despite the measure’s failure to win nine votes, the hearing itself offered important lessons for the future.

1. People Care About the Mission

As I wrote on the morning on the hearing, support for preserving the Mission District’s distinctive character goes beyond normal political lines.   While turnout at public hearings can be misleading —- huge crowds opposed Lennar’s plans for Bayview-Hunters Point but voters then strongly backed the developments—that supervisors London Breed and Malia Cohen who normally favor development backed the moratorium shows the moratorium had momentum. Breed knew the moratorium would fail even with her vote, but she voted for it because it was popular in her district.

2. Julie Christensen Not Ready for Prime-Time

I’ve heard from many people I trust that D3 Supervisor Julie Christensen is a smart, informed policymaker. But her years of work on policy issues did not prepare her for life as a politician, where every public utterance is potentially reported by the media.

Christensen previously ran into trouble with a statement she made at a Mayor’s Housing Bond meeting describing rent control as a problem for seniors. At Tuesday’s moratorium hearing, she made the following comment reported in the SF Chronicle:

“My concern is this moratorium is like a farmer spreading pesticides all over his ranch and just hoping the right crop comes up,” she said.

Comparing a housing moratorium overwhelmingly backed by Latinos and working people to the spraying of dangerous pesticides is a terrible analogy. It’s about as bad as Christensen could have found.

I understand what she was trying to say. She was making the fair point that moratorium backers assume that a two year delay on development will suddenly make potential affordable housing sites in the Mission available for purchase at a workable price. That’s a leap of faith that Christensen could have challenged using precisely those terms.

There was no reason for her to analogize to health threatening pesticides. Nobody claims the moratorium will cause health problems. Christensen made the type of comment that is going to come back to haunt her in her race against Aaron Peskin in November.

D3 voters are accustomed to having their supervisors serve as Board Presidents and playing leadership roles in the city. It’s not Christensen’s fault that she lacks this stature soon after being appointed, but the contrast between her and her predecessors Peskin and Chiu is not helped by such inappropriate comments.

Jane Kim was as vocal as David Campos in favor of the moratorium. Earlier this week Kim also offered an alternative to the Giants development that increases the amount of affordable housing and lowers income targets.

Combining these two actions with Kim’s sponsorship of a package of eviction prevention measures and she has become the go to Board member for affordable housing issues. I even saw a tweet from constant Kim critic Chris Daly praising his D6 successor, which shows how Kim has become the recognized Board leader on such issues.

Kim’s leadership on a range of progressive issues in 2015 should deflate those pushing for Tom Ammiano to enter the 2016 State Senate race against Kim and Scott Wiener. I never thought Ammiano wished to return to the rigors of campaigning, but Daly and others have encouraged him to run.

4. “Saving the Mission” is Complicated

Olsen Lee, Director of the Mayor’s Office of Housing, made this point at the hearing and it bears repeating. Those of us who want the city to acquire all available sites in the Mission for affordable housing—and my position applied to sites not currently in development—are oversimplifying the problem.

The fact that a site is undeveloped does not mean that it is for sale. Or that it is for sale at a reasonable price. The New York Times had an illuminating story this week about city efforts to build a park on the Williamsburg waterfront. Turns out that a piece of unused industrial space suddenly had a high price tag once the owner found out the city needed it for a park.

Specifying 13 sites for affordable housing would also drive up prices. And even if all 13 property owners offered to sell to nonprofits at a fair price, the city lacks anywhere near the money to acquire and develop 13 new affordable housing projects.

It’s great to think that stopping new market rate development and creating a nonprofit site acquisition plan will “save” the Mission; but it’s a lot more complicated.

I saw joy, solidarity and overall positive energy at the moratorium hearing, again confirming that activism is both socially important and fun. Kudos to Supervisor David Campos for creating the opportunity for a full Board hearing, which distinguished the moratorium turnout from other Supervisor proceedings.

Mission housing protests often feature music, singing and other festivities that harken back to the labor protests of the 1930’s and the heyday of the UFW. People won’t stay involved in social change activism if the process is not enjoyable, and the moratorium movement is inspiring a new generation of activists to fight for a better San Francisco.

Will the moratorium gather enough signatures to qualify for the ballot? We’ll soon find out.

Randy Shaw is Editor of Beyond Chron. Enjoy his new book, The Tenderloin: Sex, Crime and Resistance in the Heart of San Francisco