5 Blocks: A Must See Film on SF’s Mid-Market 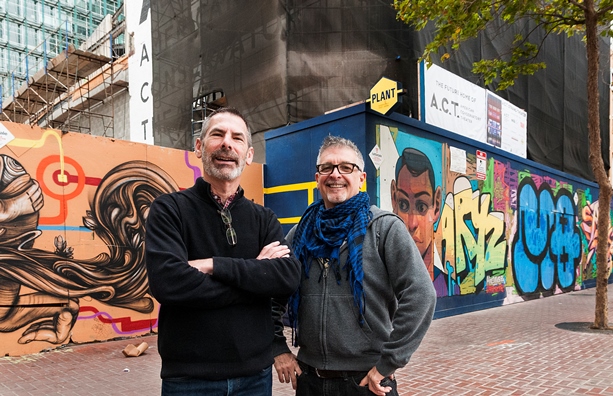 San Francisco’s Mid-Market may be the city’s least understood neighborhood. While everyone agrees that Mid-Market’s long decline needs to be reversed, there is disagreement on how to accomplish this and what defines “success.”

Dan Goldes’ and Robert Cortlandt’s new film 5 Blocks offers the best account of the thought process that underscored Mid-Market’s evolution since 2011, when Mayor Ed Lee prioritized the area’s revival. The film avoids the ideological blinders that the media has too often used to deceive rather than illuminate Mid-Market’s development.  5 Blocks offers diverse perspectives on the Mid-Market/Tenderloin payroll tax credit for net new hires that the Board of Supervisors passed 8-3 in 2011, allowing viewers to reach their own conclusions.

I wish all San Franciscans could see this film. It should also interest those in other cities considering  how to revive depressed urban neighborhoods without displacement and the negative sides of gentrification.

It plays Thursday, October 24 at 7pm at  the Tenderloin Museum. The film will be followed by my interview with Director Goldes and audience questions. Its previous show sold out so you do not want to delay. You can purchase tickets here.

The film begins where it should, which is with Mid-Market’s past. The area had been in an economic downturn for decades prior to Twitter expressing interest in relocating to 9th and Market. It then explains the considerations that went into planning Mid-Market’s revival. Among these considerations was avoiding displacement and expanding the arts, both of whose goals were achieved to a far greater extent than many realize. The film uses voices of city officials planning Mid-Market’s evolution to establish that turning the area into an upscale playground was never the goal.

It is easy to forget how the area has become an arts hub since 2011. Fifteen arts groups have come to the Mid-Market/Tenderloin area since 2011.  The film highlights the area’s arts revival, including generous comments from former American Conservatory Theater (ACT) artistic director Carey Perloff and Tenderloin artist Sylvester Guard. Contrary to fears raised around Twitter’s arrival, the area’s art scene grew rather than being displaced.

The focus on the new ACT theater in Mid-Market was particularly telling for me as I remember when the project was being talked about by ACT officials. I attended the groundbreaking, the official opening, and the opening night play. Yet even I often forget that ACT was not part of the Mid-Market arts scene until Mayor Lee decided to prioritize the area as a haven for the arts.

5 Blocks shows a scene where people are coming in to buy some of Guard’s art works. Zendesk became a big supporter of Tenderloin artists, a synergy between tech and art that the film reminds us about.

Interviews with Amy Cohen and Ellyn Parker of the San Francisco Office of Economic and Workforce Development show the challenges faced by those planning for Mid-Market’s future. What did people want Mid-Market to become? Historically the Bay Area’s center for first run Hollywood films, in 2010 the street was a combination of primarily older rundown office buildings and vacant spaces.

I detail Mid-Market’s long decline in The Tenderloin: Sex, Crime and Resistance in the Heart of San Francisco. I also describe how the economic fortunes of the Tenderloin and Mid-Market have long been linked).

In some cases, as with Zendesk’s purchase of one of the city’s great historic buildings at 1019 Market, a future use for an existing property was clear. Zendesk’s founder and CEO Mikkel Svane is a critical voice in the film. He reflects both the optimism that Mayor Lee’s vision inspired among investors as well as the concerns as Mid-Market’s improvement lagged behind expectations.

But the future uses of other large sites was not clear. Mid-Market never had many housing sites. Many blocks had very little housing and the overall numbers are inflated by the large number of units at Trinity Plaza and Fox Plaza. When housing was planned for sites on the 1000 block, this meant that new development would be delayed until the city’s glacial housing approval process was completed. The approval delays slowed Mid-Market’s improvement.

5 Blocks would have benefited from interviews with developers like Group I’s Joy Ou who could have offered a critical perspective on how the area’s revival was slowed by the planning process. I routinely come across people mystified at why progress has been slower than expected and hearing from developers would have helped fill this information gap.

5 Blocks reminds us how far Mid-Market has come since 2011. A neighborhood starved for investment for decades is on the road to revival, even though the pace of change is slower than nearly everyone hoped.

It’s faster to transform neighborhoods through bulldozers and displacement, but that was never Mayor Lee’s strategy for Mid-Market.

Directors Goldes and Cortlandt created a film that should encourage those disappointed at Mid-Market today. The expectations of the heady days of 2011 were likely too high, but Mid-Market is on track to fulfilling its potential. By the end of 2021, the plans outlined in 5 Blocks will be in place.

A perfect opportunity for a sequel.

Randy Shaw is Editor of Beyond Chron and Director of the Tenderloin Housing Clinic. He is interviewed in 5 Blocks but had no editorial influence.