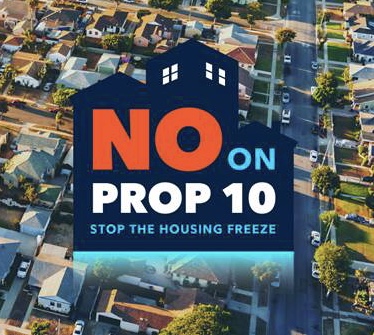 The Truth About Costa Hawkins Repeal

As Big Real Estate spends millions to defeat California’s Prop 10 (which repeals the Costa Hawkins Act), its falsehoods are coming fast and furious. Here are five of the biggest.

Donald Sterling (the former LA Clippers owner who lost the team over his racism), the Blackstone Group’s Steven Schwarzman and other billionaire landlords claim to be spending big to protect California tenants from rent increases. That’s a hard and likely impossible sell.

After all, why would landlords be spending millions to drive rents down?

But the No on 10 campaign claims this is its goal. And they even have “independent academic experts” to verify this falsehood.

I know such experts well. They have long opposed rent control any tenant or rental housing  measure that restricts landlords’ profits.

Similar experts claim environmental protection measures make the air dirtier and minimum wage hikes  hurt the poor. They are all part of negative campaigns designed to challenge the core argument of the pro side—regardless of their arguments being nonsensical and false.

How could a ballot measure that returns to cities the power to limit rents on vacant apartments “drive up rents” higher than they have already been driven without any limits?  Prop 10 won’t “drive up rents” for anybody.

This false claim also targets proponents’ core argument about the groups most benefiting from Prop 10. It also makes no sense. Renters are the chief beneficiary of stronger rent protections, and seniors, veterans and the disabled tenants are part of the renter population.

This claim of providing “no protections” is even a bigger lie because Prop 10 returns rent control to single family homes where thousands of renters live. The truth is that the backers of Costa Hawkins never even tried to make the case for exempting single-family homes from rent control. They just threw it in when they knew they had the votes to end vacancy control. This misguided exemption brought Wall Street speculators into the single family homes due to their unrestricted rents, driving up prices for home buyers.

This  false claim makes a mockery of how voters learn about ballot measures. Pop 10 cannot make the housing crisis worse. The vacancy control preemption is not even self-executing. All of California’s large cities—including Los Angeles, San Francisco, Oakland, San Diego, Sacramento, and Fresno—- would have to enact vacancy control provisions if Prop 10 passes.

Passage of Costa-Hawkins did not cause California’s housing crisis but it unquestionably made it worse. Prop 10 restores cities’ power to utilize a valuable tool for increasing affordability. Allowing rents to rise unlimited amounts upon every vacancy undermines the entire purpose of rent control, which is precisely what Costa Hawkins backers sought.

Costa-Hawkins passed during an economic downturn when rents on vacant units were rising at unusually small levels. There is no possible way the law could pass in the current era of skyrocketing housing prices—which is why repeal makes so much sense.

I encourage those who share that view to keep reading because the facts do not support this conclusion.

When San Francisco passed rent control in 1979, new construction was exempted. In the next 16 years tenants pushed ample legislation and ballot measures to strengthen virtually every part of that 1979 law—but never touched the rent control exemption.

And as someone who was involved in the discussions around tenant legislation and ballot measures during those years, I can say that revising the new construction exemption was completely off the table. I don’t believe such a revision was ever even introduced at the Board of Supervisors.

If eliminating vacancy control unlocked new housing construction—as Big Real Estate promised in 1995—the post-Costa Hawkins era would not have seen such staggeringly low new housing totals. It is zoning laws that bar apartments throughout much of California’s major cities, laws that Big Real Estate has been happy to maintain.

Simply put, Californians were fooled once in believing that eliminating vacancy control and creating a state rent control exemption for new housing would unleash new housing development. This did not happen. Now No on Prop 10 wants to fool people again.

Is Prop 10 just one more burden making it harder for developers to get financing? My goodness, before opposing a measure making hundreds of thousands of rental housing units more affordable let’s first lift all the other burdens to new housing—-zoning restrictions, glacial approval processes, homeowner veto power over development, excessive appeal rights—- and much more.

None of the major cities listed above will place a vacancy control measure on the ballot that does not exempt new construction. The reason: labor unions will not back vacancy control without that provision and they are a central component of any winning electoral coalition.

Since Costa-Hawkins passed in 1995, landlords in rent controlled cities have enjoyed undreamed of profits. Yet none of the real estate industry’s predictions of increased affordability and rental housing supply came true.

Despite Costa-Hawkins’ failure to accomplish these stated goals,  many claim that they support “reforming” Costa Hawkins, not full repeal.

Here’s the truth that everyone making such a claim should know: there is no chance for “reforming” Costa-Hawkins. None. A bill that could have done just that could not even get out a legislative committee earlier this year. A ballot measure not repealing the post-1995 construction exemption would have the same level of financial opposition as Prop 10—because Costa Hawkins has always been all about stopping vacancy control.

To believe Costa-Hawkins can be “reformed” by the state legislature is the biggest fantasy of all. And those promoting the fantasy of some future legislative “deal” are clearly ignorant of how landlords have operated in Sacramento since 1979.

It’s either repeal via Prop 10 or a future statewide initiative. Big Real Estate knows there is no legislative route, which is why it will spend close to $100 million to defeat the measure.

Randy Shaw is Editor of Beyond Chron. He offers solutions to California’s housing crisis in his new book, Generation Priced Out: Who Will Live in the New Urban America, out from UC Press in October.