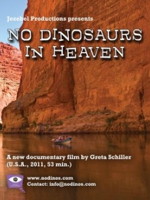 Contrary to the Huckabees of the world, friction between religious and secular society is far more complicated than waiting an hour to buy a fried chicken sandwich. The 4th San Francisco Atheist Film Festival comes to the Roxie Theatre on August 11, 2012 to provide more mentally substantive food for thought. Attendees will see in the festival’s words “fresh, offbeat cinema that celebrates and encourages reason, critical thinking, and freedom of inquiry.”

The budget conscious may rightly note that such festival offerings as “The Invention of Lying” and “End of the Line” have already received either theatrical or festival exposure. Yet the chance to unexpectedly mingle with filmgoers who definitely appreciate discussing films in more than just cliched soundbites surely outweighs the monetary benefit of video streaming. Also, among the eight features and the seven shorts being screened at the Atheist Film Festival, surely the adventurous viewer will find something he or she hasn’t seen before.

If Jews have been attacked for being the killers of Jesus, why would Christian evangelicals heavily support Israel? David Heilbroner and Kate Davis’ documentary “Waiting for Armageddon” offers the disconcerting answer. The film ties together evangelical belief in the Rapture and the Battle of Armageddon with the shaping of America’s Middle East policy. In Armageddon theology, Israel is the theater for World War III…

“Facing the possible end of the world in a late-night subway tunnel” provides the short form description of Maurice Devereaux’ Canadian chiller “End of the Line.” For those who missed the film at Another Hole In The Head Film Festival, Devereaux’ horror tale concerns a psychiatric nurse and her fellow subway passengers, who are pursued by supernatural forces and homicidal cult members convinced the end of the world has arrived.

“The Invention of Lying” from Ricky Gervais and Matthew Robinson is set in an alternate world where everybody tells the truth regardless of the consequences. Loser Mark (Gervais) achieves fame and fortune after discovering his ability to lie, since his falsehoods are regarded as truth by everyone else. Unfortunately for Mark, he hadn’t reckoned on the effects of his lies getting out of control.

One prevalent real-world lie is the supposed innocuousness of mixing church with America’s government institutions. Jay Rosenstein’s Peabody and Emmy award-winning documentary “The Lord Is Not On Trial Here Today” tells the forgotten story of how Vashti McCollum’s efforts to protect her 10-year-old son led to a landmark U.S. Supreme Court decision regarding church-state separation.

Yet acceptance of that court decision still remains elusive in the present day. Vic Losick’s documentary “In God We Teach” even-handedly looks at a small town student-teacher clash with national repercussions. Kearny, NJ high school student Matthew LaClair became both a national media darling and a local social pariah after going to the media with footage of teacher James Paszkiewicz allegedly proselytizing for Jesus in his classroom. Rather than going for easy answers, the director allows both LaClair and Paszkiewicz to state their respective cases and leaves the viewers to decide.

Greta Schiller’s documentary essay “No Dinosaurs in Heaven” offers an alarming portrait of how religious fundamentalists are aggressively undermining American science education. Creationist proselytizers have deliberately obtained science teacher credentials so they can stealthily have classroom platforms to present their belief in creationism as an alternative to evolution. Schiller debunks creationism with footage of a river trip led by Dr. Eugenie Scott of the National Center for Science Education. Dr. Scott’s trip through the Grand Canyon visually underscores why creationism is not the scientific equal of evolution.

The Atheist Film Festival’s final feature film is Julie Loktev’s stunningly disturbing “Day Night Day Night.” Luisa Williams plays an unnamed 19-year-old girl on a mission to commit a suicide bombing in New York City’s Times Square. The girl’s identity, past, or reasons for her decision are not important. What ultimately matters is the clash between her faith in her mission and her interaction with the city.

For those who prefer their filmwatching in short bites, the festival’s short film program offers drama and comedy in various measures.

Jud Widing and Casey Fiore’s “The Drudge” is a comedy with a wicked set-up. What links an unorthodox priest, a traveling corpse, an attempted adulterer, and a bishop who takes care of his own?

Apocalyptic mayhem may be an odd subject for a comical music video. Yet that’s precisely what happens with Jesus’ return to Earth in Andy Shernoff’s animated short “Are You Ready to Rapture?”

Blanca Marcela Lopez’ short documentary “Mea Culpa” looks at Catholics who may have left their church yet find its beliefs still shape their lives.

James Wood’s animated short “Three Ring” looks at the continually changing balance between religion and scientific knowledge. As science changes human understanding of the world, the religiously devout struggle to not be left behind.

The shorts program concludes with Australian Craig Foster’s drama “Parrot.” It concerns a closeted atheist son whose parents are devout Catholics. After tragedy strikes, the son and his parents need to resolve their differences at the worst possible time.

It may seem disheartening that this year’s Atheist Film Festival is only a one-day event. Yet the mere existence of a film festival whose selections intelligently question religious folly is another reason to cherish this city for cinephiles.